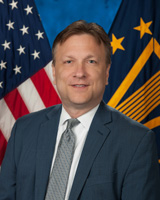 Mr. Walters represents NCA at congressional hearings, in briefings with members of Congress and their staff, Veterans Service Organizations, the Office of Management and Budget, advisory committees, and other interested groups. In his previous position, he was responsible for the successful implementation of key legislative mandates to include the Chief Financial Officers Act and the Government Performance and Results Act within NCA.

He began a career with the Department of Veterans Affairs in 1985 as a Budget Analyst in the Controller's office and held various other management positions during his tenure. In October 2003, he accepted a position as the Associate Chief Financial Officer for Budget and Planning in the Office of Personnel Management until joining NCA in 2006.