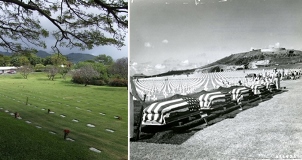 December 7, 2016, marks the 75th anniversary of the Japanese attack on Pearl Harbor, Hawaii, an event that brought the United States into World War II. In less than two hours, the American death toll topped 2,400, with 1,178 injured. National Memorial Cemetery of the Pacific (NMCP) Hawaii, developed to bury Pacific Theater dead, opened in January 1949 with the interment of an unknown serviceman who died in the attack on Pearl Harbor. NMPC is the final resting place for many Pearl Harbor casualties, and by December of that year NMCP contained more than 13,000 World War II dead. Temporary wooden grave markers were replaced with granite flat markers in 1951. At NMCP, Pearl Harbor losses are commemorated by a memorial flagpole and seven monuments.

The Pearl Harbor Survivors Association, a congressionally charted veteran service organization formed in 1958, has donated more than 20 monuments to NCA cemeteries nationwide. In 2015 the Department of Defense (DOD) escalated its efforts to identify 1,061 individuals who died at Pearl Harbor and other maritime losses, and who were buried as "unknowns" at NMCP. Using DNA technology and other scientific techniques, as of this anniversary, DOD has disinterred 388 remains from NMCP and verified more than 50 identities.

In recognition of the Vietnam War, the Department of Veterans Affairs (VA) has designated March 29, 2016, as the day to express gratitude to this generation of Americans who have "borne the battle," and acknowledge those now interred in its national cemeteries. VA National Cemeteries contain twenty-seven monuments, and the graves of thirty-eight Medal of Honor recipients from the Vietnam era.

NCA owes its origins to the Civil War, as does the Signal Corps, U.S. Army. Airborne communication of military information started with "air telegraphy," balloons, and Zeppelins before World War I. In the twentieth century, servicemembers piloting fixed-wing aircraft, helicopters, and supersonic jets ushered in the U.S. space program. We dedicate Cape Canaveral National Cemetery on November 20, 2015, in recognition of these men and women.

Timeline - NCA and the Civil War

To commemorate the 150th anniversary of the Civil War, NCA is proud to conduct special presentations at VA Headquarters and activities at its historic cemeteries. Programs recognize national cemetery origins as a consequence of the Civil War (1861-1865).

View a historical timeline of the Civil War and National Cemeteries.

Unlike today, early U.S. military practice did not include awards and medals. The Civil War changed this. Americans fighting on both sides led government officials to recognize this bravery. President Abraham Lincoln signed a bill creating 200 "medals of honor" in late 1861. From this came the Medal of Honor, today the highest commendation for military service. The medal design, eligibility for it, and recognition on a recipients' grave marker have all evolved since the Civil War. Today, 390 Medal of Honor recipients are interred in VA cemeteries. Learn more about these honored dead and the commemoration.

Starting in fall 2012, with plans to continue through mid-2015, NCA is marking the sesquicentennial with occasional commemorative programs. These educational lectures and programs share with VA employees and guests new scholarship on themes relevant to the oldest national cemeteries, and projects demonstrating NCA's stewardship of associated historic resources. Program topics relate to the agency's origin with the Civil War, and touch on the diverse cultural and military service represented across the burial system. See a list of past programs.

Enemy POWs in VA Cemeteries: World War I and II 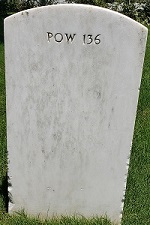 During World War II, prisoners of war were interned in the United States to provide manual labor in communities while American men served in the military. If German, Italian, and Japanese POWs died, they were interred in temporary camps, then finally in national or post cemeteries. This was in accordance with the Geneva Convention and U.S. Department of the Army practices. Twenty-one VA cemeteries contain the remains of more than 1,000 enemy WW II prisoners; two contain the remains or memorialize WW I and WW II POWs. In late 2020, NCA removed two German POW headstones that contained Nazi inscriptions after completing consultation per the National Historic Preservation Act.

NOTE: Page may contain links that will take you away from the Department of Veterans Affairs website.