Why Does VA Provide a Burial Flag? 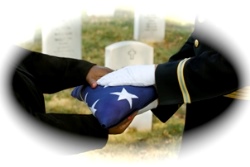 A United States flag is provided, at no cost, to drape the casket or accompany the urn of a deceased Veteran who served honorably in the U.S. Armed Forces. It is furnished to honor the memory of a Veteran's military service to his or her country. VA will furnish a burial flag for memorialization for an other than dishonorably discharged:

1. Veteran who served during wartime
2. Veteran who died on active duty after May 27, 1941
3. Veteran who served after January 31, 1955
4. Peacetime Veteran who was discharged or released before June 27, 1950 after serving at least one enlistment, or for a disability incurred or aggravated in line of duty
5. Certain persons who served in the organized military forces of the Commonwealth of the Philippines while in service of the U.S. Armed Forces and who died on or after April 25, 1951
6. Certain former members of the Selected Reserves

Who Is Eligible to Receive the Burial Flag?

Generally, the flag is given to the next-of-kin, as a keepsake, after its use during the funeral service. When there is no next-of-kin, VA will furnish the flag to a friend making request for it. For those VA national cemeteries with an Avenue of Flags, families of Veterans buried in these national cemeteries may donate the burial flags of their loved ones to be flown on patriotic holidays.

How Can You Apply?

You may apply for the flag by completing VA Form 27-2008, Application for United States Flag for Burial Purposes. U.S. Post Offices are the primary issuing point for burial flags. Generally, the funeral director can help you obtain a flag. Call and confirm with the post office in advance. Not all local post offices have burial flags on hand but they should be able to direct you to the closest issuing post office. Regional VA Offices can also help identify local issuing points.

Can a Burial Flag Be Replaced?

The law allows us to issue one flag for a Veteran's funeral. We cannot replace it if it is lost, destroyed, or stolen. However, some Veterans' organizations or other community groups may be able to help you get another flag.

How Should the Burial Flag Be Displayed?

The proper way to display the flag depends upon whether the casket is open or closed. VA Form 27-2008 provides the correct method for displaying and folding the flag. The burial flag is not suitable for outside display because of its size and fabric. It is made of cotton and can easily be damaged by weather.

Most of the Department of Veterans Affairs national cemeteries display an Avenue of Flags on patriotic holidays and during special events. The Avenues consist of burial flags donated by the families of deceased Veterans and provide a unique visible tribute to all of our Nation's Veterans.

A Certificate of Appreciation is presented to the donor for providing their loved ones' burial flag to a national cemetery.

Please contact the cemetery of your choice for information on how to donate a Veteran's burial flag.