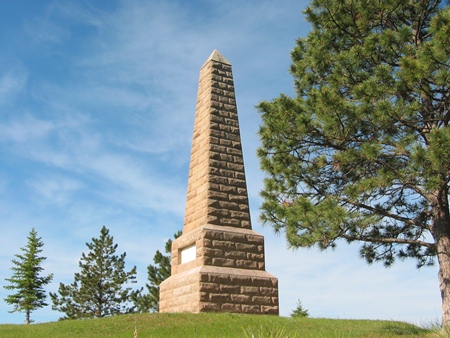 Hot Springs National Cemetery is closed to new interments. The only interments that are being accepted are subsequent interments for veterans or eligible family members in an existing gravesite. Periodically however, burial space may become available due to a canceled reservation or when a disinterment has been completed. When either of these two scenarios occurs, the gravesite is made available to another eligible veteran on a first-come, first-served basis. Since there is no way to know in advance when a gravesite may become available, please contact the cemetery at the time of need to inquire whether space is available.

This cemetery is managed by the Director of the Black Hills National Cemetery, 20901 Pleasant Valley Drive, Sturgis, S.D.

In 1902, a National Home for Disabled Volunteer Soldiers was approved for the Hot Springs area and construction was completed in 1907. The home was originally named the Battle Mountain Sanitarium after a nearby mountain peak. The cemetery was established for the interment of veterans who died while residing at the home. In 1930, the home became part of the Veterans Administration and, in 1973, the cemetery was one of 21 cemeteries transferred to what was then known as the National Cemetery System.

Hot Springs National Cemetery was listed on the National Register of Historic Places in 1974.

Monuments and Memorials
The Battle Mountain Monument is a 32-foot tall obelisk tower situated on the cemetery’s highest point. The monument was dedicated in 1914 in memory of the men who gave their lives in defense of the country.

The Squire Monument is a granite block memorial erected in 1940 to honor Army Chaplain Guy P. Squire. He served in the Spanish-American War and World War I, and later served as chaplain at the Hot Springs VA Medical Facility. The monument was erected by the Veterans of Foreign Wars, District 10.

Lieutenant Charles L. Russell (Civil War). He received the Medal of Honor while serving in the U.S. Army, Company H, 93rd New York Infantry, for actions at Spotsylvania, Virginia, May 12, 1864. Russell died in 1910 and is buried in Section 3, Row 1, Site 12.

More than half of VA's national cemeteries originated with the Civil War and many are closed to some burials. Other sites were established to serve World War veterans and they continue to expand. Historic themes related with NCA's cemeteries and soldiers' lots vary, but visitors should understand "Why is it here?" NCA began by installing interpretive signs, or waysides, at more than 100 properties to observe the Civil War Sesquicentennial (2011-2015). Please follow the links below to see the interpretive signs for Hot Springs National Cemetery.