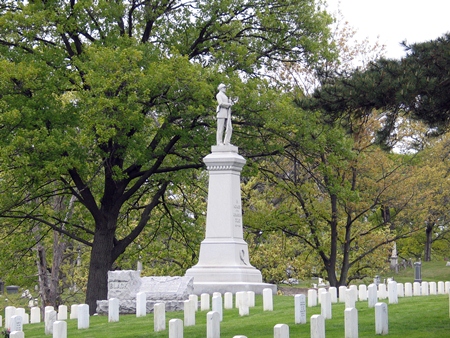 The nearest commercial airport is the Quincy, Ill., airport. From the airport, turn right onto Route 104, take 104 to Route 96. Follow Route 96 from Quincy to Hamilton, Ill., (35 miles). At the intersections of Routes 96 and 136, turn left. Follow Route 136 for approximately 1.5 miles, cross the Mississippi River; the City of Keokuk begins here. Continue through Keokuk on Main Street, which is also Highway 218/61, to the intersection of Main and 18th street, turn left on 18th Street. The street ends at the original section of Keokuk National Cemetery. Continue through the adjacent Oakland Cemetery to the first left. The Western section and administration building are at the next left.

Artificial flowers: Artificial flowers will be permitted on the gravesite during the period Oct. 10 through April 15. (Easter specific artificial decorations will be removed and discarded beginning the 2nd Monday after Easter to facilitate preparations for Memorial Day). Christmas decorations, wreaths, grave blankets (no larger than three feet by five feet), etc., are permitted beginning the Friday after Thanksgiving. They will be removed beginning March 1 each year. Decorations removed from the gravesites will be discarded after 30 days from the pick up date.

Perpetual care: Guidelines provide for grounds maintenance, cutting the grass and trimming around the headstones/markers, and all areas of the cemetery on a weekly basis. This includes the removal and disposal of unauthorized grave decorations and artificial arrangements (except during periods specified above). Fresh cut floral arrangements will be removed from the gravesite and disposed of by cemetery personnel when they become withered, faded, or otherwise unsightly. Any decorations or floral items that have been displaced from the gravesites, due to wind or other factors out of our control, will be removed from the graves and disposed of by cemetery personnel.

Until 1837, the sole inhabitants of the area that is now the town of Keokuk, Iowa, were members of the Sauk and Fox tribes. In 1837, however, the tribes agreed to a treaty that allowed limited settlement of white farmers. Shortly after the treaty went into effect, white settlers began to migrate into the area. But the greatest number of settlers did not arrive until 1842 when a second treaty compelled the Fox and Sauk to move farther west. The treaty would go into effect in May 1842, although white settlers had begun camping along the county border a month earlier. Subsequently, at one minute after midnight on May 1, anxious settlers rushed in to stake their land claims.

By the beginning of the Civil War, Keokuk was home to a population of approximately 13,000 people. Its location, at the confluence of the Des Moines and Mississippi rivers, made an ideal location for the transportation of produce for the war. The first Civil War facility in Iowa was Camp Ellsworth, located near Keokuk, where troops were mustered as early as May 1861. More posts, including Camps Rankin, Halleck and Lincoln were established in 1861 and 1862. As the war progressed, five Army hospitals were established in the area to help care for the thousands of sick and wounded soldiers transported up the Mississippi River from Southern battlefields. Most of the original interments at Keokuk National Cemetery came from these hospitals.

The 2.75-acre Keokuk National Cemetery was originally a part of Oakland Cemetery until the city donated the land to the U.S. government in the mid 19th-century. According to an 1871 inspection report, just after the Civil War there were 627 interments; 600 known Union soldiers and 27 unknown soldiers. Not mentioned in the report were the remains of eight Confederate soldiers buried at the national cemetery, who died in Keokuk as prisoners of war.

Keokuk National Cemetery was placed on the National Register of Historic Places in 1997.

Monuments and Memorials
The Unknown Soldiers monument was erected in 1912 by the Women’s Corps of Keokuk in honor of 48 unknown soldiers buried at the cemetery. The monument is a large granite obelisk topped with the figure of a Union soldier standing at parade rest.

The American War Dads and Auxiliaries of Iowa erected a bronze wreath dedicated to Unknown Soldiers. Date of dedication is unknown.

Born in Cork, Ireland, Michael Crowe (1849-1883) emigrated to New York as a young man and enlisted in the U.S. Army in 1867. Initially Private Crowe served with the 34th Infantry as a wagoneer, then he transferred to the 7th Cavalry just before the Great Sioux War of 1876 in which Sioux and Cheyenne Indian tribes engaged federal troops to preserve their culture and lands in the Black Hills. On June 25-26, the 7th U.S. Cavalry, under the command of Lt. Col. George Armstrong Custer, took the offensive. In the infamous Battle of Little Bighorn, Custer and one-third of his men died. Crowe survived and remained in the army until his death in 1883. Pvt. Crowe was buried in the post cemetery at Fort Yates (ND), which was decommissioned in 1903; in 1908 his remains were reinterred in Keokuk National Cemetery (Section H, Site 796).

More than half of VA's national cemeteries originated with the Civil War and many are closed to some burials. Other sites were established to serve World War veterans and they continue to expand. Historic themes related with NCA's cemeteries and soldiers' lots vary, but visitors should understand "Why is it here?" NCA began by installing interpretive signs, or waysides, at more than 100 properties to observe the Civil War Sesquicentennial (2011-2015). Please follow the links below to see the interpretive signs for Keokuk National Cemetery.