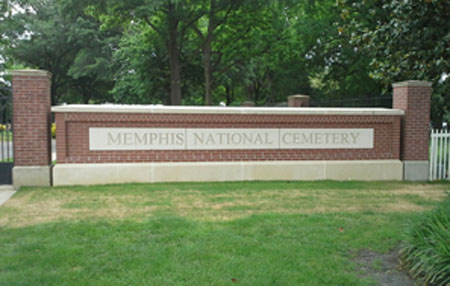 Entrance of the Memphis National Cemetery.

The cemetery is located in Shelby County, Memphis, Tennessee, in the northeastern part of the city.

Cemetery policies are conspicuously posted at the main entrance to the cemetery.

Floral arrangements accompanying the casket or urn at the time of burial will be placed on the completed grave. Natural cut flowers may be placed on graves at any time of the year.

Memphis originated as a campground of the Chickasaw nation. The first European explorer, Hernando De Soto, arrived in 1541 and claimed the territory for Spain. More than a century later, in 1682, the French would also claim the land on behalf of King Louis XIV. It was not until 1797 that the United States took possession of the territory and erected Fort Adams. In 1818, the Chickasaw signed a treaty granting much of what is West Tennessee to the United States. A year later, three Nashville speculators founded the city of Memphis: John Overton, James Winchester and Andrew Jackson, future president of the United States.

Once Memphis fell under Union control, it became a convenient location to care for the sick and wounded troops flooding in from surrounding areas. General hospitals capable of caring for thousands of men at a time were set up in and around the city. A board of officers who purchased 32 acres northeast of the city chose the cemetery site. It was originally known as Mississippi River National Cemetery. At the end of the war, burials included reinterments from camps and hospitals throughout the region.

Memphis has the second-largest group of unknowns interred in any national cemetery. The large quantity of unknowns may be attributed to the long interval between battlefield burial and reinterment at Memphis National Cemetery. Often, the crude wood markers that identified original burials had been removed or deteriorated to the point where they were no longer legible. As soldiers were not required to carry personal identification, it was often difficult to determine the identity of the remains.

Memphis National Cemetery is also the burial place of the victims of one of the nation's most tragic maritime disasters—the explosion of the USS Sultana. On April 23, 1865, after undergoing boiler repairs, the vessel had picked up a number of Union prisoners of war released from Andersonville prison in Georgia and Cahaba prison in Alabama. The captain, a part owner of the vessel, was paid $5 a head for enlisted men and $10 for officers, so he did not baulk when the steamer was overloaded with passengers. The USS Sultana was certified to carry 376 passengers, but it carried well over 2,000 soldiers anxious to return home.

The steamer left Vicksburg and reached Memphis on the evening of April 26, where the passengers heard the news of President Lincoln's assassination. From Memphis, the ship stopped at a coaling station on the Arkansas side of the river, bound for Cairo, Ill. About 2 a.m. a boiler exploded and the blast toppled the smokestack and cut the deck in two. Many men were killed instantly by the fire and steam, others began going over the side. Many of the wounded were put over the side to avoid the inferno, only to drown miles away. Only about 800 persons survived.

The Illinois Monument is a granite-and-bronze sarcophagus commissioned by the state of Illinois. Dedicated in 1929, it depicts a soldier in repose.

More than half of VA's national cemeteries originated with the Civil War and many are closed to some burials. Other sites were established to serve World War veterans and they continue to expand. Historic themes related with NCA's cemeteries and soldiers' lots vary, but visitors should understand "Why is it here?" NCA began by installing interpretive signs, or waysides, at more than 100 properties to observe the Civil War Sesquicentennial (2011-2015). Please follow the links below to see the interpretive signs for Memphis National Cemetery.