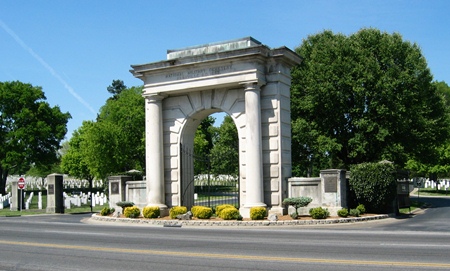 Grave Location:
The grave location of your loved one is furnished on the map included in the burial document folder. There is a gravesite locator at the administration building to assist visitors who may not know the location of the gravesite.

Grounds Maintenance:
Immediately after each interment, the grave is filled and leveled. As soon as the headstone/marker is set, the site will be seeded. Until growing conditions are favorable and turf has been established, burial areas may be substandard in appearance. A new grave requires repeated renovation because the soil continues to sink after a burial. Matters that appear to need immediate corrective action should be brought to the attention of the cemetery director.

Fresh cut flowers may be placed on graves at any time. Metal containers, other than permanent types, are available in boxes at the grave locators placed at the front and rear of the facility. The flower containers will be removed from the grave when the flowers become unsightly, and the containers will be replaced in the boxes for reuse.

Christmas wreaths, grave blankets and other seasonal adornments may be placed on graves from Dec. 1 through Jan. 10, they will be removed by Jan. 10. They may not be secured to headstones or markers. In observance of Memorial Day, flowers will not be permitted on the graves from the Thursday before Memorial Day to the first Friday in June. Digging is not permitted on the graves at any time.

It is suggested that artificial arrangements be marked so the donor can later be identified, if needed. Wind sometimes moves arrangements off the gravesites, and labeling them will help our employees to relocate them.

The national cemetery staff will decorate all graves prior to Memorial Day with small flags. These flags will be removed immediately after Memorial Day and are not permitted on graves at any other time.

Nashville National Cemetery is located in Madison, Tenn., in Davidson County approximately six miles northeast of Nashville's city center. The tracks of the Louisville & Nashville Railroad bisect the cemetery. An easement for the right of way was granted to the railroad in perpetuity in 1912.

Most of the land for Nashville National Cemetery was acquired shortly after the Civil War. In July 1866, 45 acres were transferred to the United States from Morton B. Howell, master of the Chancery Court of Nashville, in accordance with the decree of the court. During the first few months of 1867, another 17 acres were conveyed in the same manner. The final portion, about 1-1/2 acres, was purchased by the United States in 1879 from J. Watts Judson.

The original interments were the remains of soldiers removed from temporary burial grounds around Nashville's general hospitals, as well as the Civil War battlefields at Franklin and Gallatin, Tenn., and Bowling Green and Cave City, Ky. There are 4,141 unknowns interred at Nashville National Cemetery.

The stone wall around the cemetery and the limestone archway at the entrance were both constructed in 1870. At one time, rumors held that the remains of three Union soldiers were entombed at the top of the archway, but there is no evidence to support this claim. The present lodge, the third constructed at the cemetery, was built near the site of the original lodge and was completed in 1931.

Nashville National Cemetery was listed in the National Register of Historic Places in 1996.

Monuments and Memorials
Nashville National Cemetery is home to one of five monumental masonry archways that originally served as the formal entrance to national cemeteries found in the South. Three are managed by NCA: Marietta, Ga., built 1883; Chattanooga, Tenn., built ca. 1880; and Nashville, Tenn., built ca. 1870. These Roman-inspired structures are approximately 35 feet high with Doric columns, a pair of ornamental iron gates, and inscriptions above. The two other memorial arches are found at Arlington National Cemetery, built 1879, and Vicksburg National Cemetery, ca. 1880, properties managed by the Department of Defense and National Park Service, respectively.

Corporal John Carr (Indian Wars). He received the Medal of Honor while serving in the U.S. Army, Company G, 8th U.S. Cavalry, for actions in the Chiricahua Mountains, Arizona Territory, October 29, 1869. Carr died in 1891 and is buried in Section KK, Site 16550.

Private Charles P. Cantrell (Spanish-American War). He received the Medal of Honor while serving in the U.S. Army, Company F, 10th U.S. Infantry, for actions at Santiago, Cuba, July 1, 1898. Cantrell died in 1948 and is buried in Section 1, Site 132.

One of the oldest private markers in the cemetery is a spire located in Section M, Site 16234, which was dedicated in memory of James Leonard of the 1st Kansas Battery. He was killed by guerrillas on Jan. 23, 1864 and interred on Jan. 27, 1864.

Erastus Milo Cravath (1833-1900) was born in New York and his father was active in the abolition movement, politics and, reportedly, in the Underground Railroad. He graduated from Oberlin College's School of Theology in 1857; in 1860 he went on to earn a graduate degree in divinity and he married. In 1863 Cravath enlisted in the Union Army during the Civil War, serving as chaplain in the 101st Ohio Infantry, which saw action in Tennessee. After he mustered out in 1865, Reverend Cravath worked as a field agent for the American Missionary Association, which helped establish Fisk University in Nashville as a liberal arts school. He was president of the university for 25 years and dedicated his career to the education of African Americans. Cravath established the Fisk Jubilee Singers and traveled abroad with them raising awareness and funds for the school. Cravath is buried in Section MM, Site 16694.

Colonel James W. Lawless of the Kentucky Cavalry was buried in Section MM., Site 10662 on June 25, 1899. Colonel Lawless was born in Ireland and came to the United States at the age of 16.

Colonel Edward S. Jones, Commander of the 3rd Pennsylvania Cavalry, was also the founder of the Department of Tennessee and Georgia Grand Army of the Republic and served as Commander for many years. He was interred in Section MM, Site 16520 in November 1866.

There are so many men and women interred here who were decorated for their bravery in action that it is impossible to list them all. The American flag is proudly flown 24 hours a day as a symbol of our diligence to ensure that the consecrated grounds of this cemetery will remain a living trust in remembrance of the men and women who are at eternal rest.

More than half of VA's national cemeteries originated with the Civil War and many are closed to some burials. Other sites were established to serve World War veterans and they continue to expand. Historic themes related with NCA's cemeteries and soldiers' lots vary, but visitors should understand "Why is it here?" NCA began by installing interpretive signs, or waysides, at more than 100 properties to observe the Civil War Sesquicentennial (2011-2015). Please follow the links below to see the interpretive signs for Nashville National Cemetery.