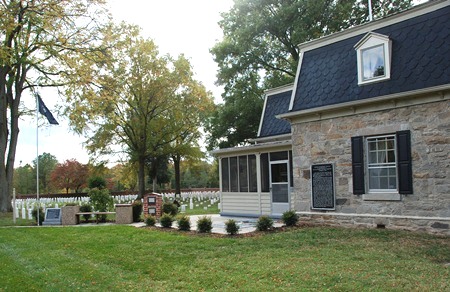 Fort Harrison National Cemetery is closed to new interments. The only interments that are being accepted are subsequent interments for veterans or eligible family members in an existing gravesite. Periodically however, burial space may become available due to a canceled reservation or when a disinterment has been completed. When either of these two scenarios occurs, the gravesite is made available to another eligible veteran on a first-come, first-served basis. Since there is no way to know in advance when a gravesite may become available, please contact the cemetery at the time of need to inquire whether space is available.

Military Funeral Honors
Either the family or funeral director must make arrangements for military funeral honors.

Fort Harrison National Cemetery is located in Henrico County, Va., seven miles south of Richmond. It is a small cemetery of 1.6 acres, which owes its existence to circumstances of the Civil War. After the Battle of Cold Harbor in the summer of 1864, which secured the Union’s northern front during its Richmond campaign, General Ulysses S. Grant marched southeast in an effort to cut off the Confederate troops. To prevent General Robert E. Lee from shifting troops around Richmond, the Union made a surprise attack on Fort Harrison, a strategic Confederate stronghold overlooking the James River. Union soldiers captured it on Sept. 29, 1864. Confederate attempts to retake Fort Harrison the next day were unsuccessful and the fort remained under Union control until the evacuation of Richmond in April 1865. During this period, it was temporarily renamed Fort Burnham in honor of Union General Hiram Burnham, who was killed at Chapin’s Farm during the federal attack on Fort Harrison.

At the end of the war, a site near Fort Harrison was appropriated for use as a cemetery. This national cemetery contains the original interments of Union soldiers who died on the battlefields of Forts Harrison, and Gilmer, and from some 40 locations within a five-mile area surrounding the cemetery. The number of unknown dead at Fort Harrison far exceeds the known dead. As of July 1876, 239 of 814 interments were known, while 575 were unknown, including four Confederate prisoners of war.

The cemetery remains a picturesque walled site with a standard, Victorian stone lodge. Fort Harrison National Cemetery was placed on the National Register of Historic Places on Aug. 10, 1995.

Private George A. Buchanan (Civil War). He received the Medal of Honor while serving in the U.S. Army, Company G, 148th New York Infantry, for actions at Chapin's Farm, Virginia, September 29,1864. Buchanan died in October 1864 and is buried in Section A, Site 224.

More than half of VA's national cemeteries originated with the Civil War and many are closed to some burials. Other sites were established to serve World War veterans and they continue to expand. Historic themes related with NCA's cemeteries and soldiers' lots vary, but visitors should understand "Why is it here?" NCA began by installing interpretive signs, or waysides, at more than 100 properties to observe the Civil War Sesquicentennial (2011-2015). Please follow the links below to see the interpretive signs for ​Fort Harrison National Cemetery.