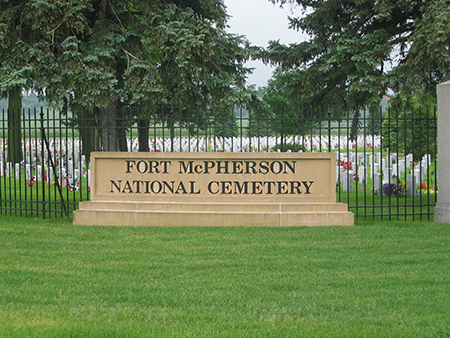 The cemetery is located on south spur 56A, four miles south of Maxwell, or two miles south of exit 190 on I-80. The nearest commercial airport is Lee Bird Field, 11 miles west of Maxwell on Highway 30. Access to 56A is gained from Highway 30 through Maxwell or from I-80, exit 190.

Grave Location: At the time of interment, we will provide a packet to the next of kin that includes a map of the cemetery with the grave location information. To locate graves of others who are buried here, please visit our public information center where you will find both automated and printed grave locators. To locate gravesites of veterans elsewhere, please visit the VA locator at https://gravelocator.cem.va.gov/. To locate gravesites of service members buried overseas, visit the American Battle Monuments Commission at http://www.abmc.gov.

The Department of Veterans Affairs does not provide military funeral honors and, while our staff is always willing to assist families in any way possible, the Department of Defense is responsible for providing military funeral honors. Additional information may be found at www.militaryfuneralhonors.osd.mil/hnrs/owa/director.show_select or by writing to the following address:

Department of Defense
Directorate for Public Inquiry and Analysis
Room 3A750 The Pentagon
Washington, DC 20301-1400

Up to three floral arrangements accompanying the casket or urn at the time of burial will be placed on the completed grave. Natural cut flowers may be placed on graves at any time of the year. They will be removed when they become unsightly or when it becomes necessary to facilitate cemetery operations such as mowing.

Christmas wreaths not to exceed 18 inches, floral blankets not to exceed 2 feet x 3 feet and other seasonal adornments may be placed on graves from December 1st through January 20. They may not be secured to headstones or markers.

Items removed from graves remain the property of the donor but are under the custodianship of the cemetery. If not retrieved by the donor within 30 days, they are then governed by the rules for disposal of federal property.

Built in 1863, Fort McPherson was established to ensure peace along the western frontier between the immigrants traveling along the Oregon Trail and the Native American inhabitants. The troops originally stationed at the post provided military protection from hostile Native Americans during the construction of the railroad.

To meet the burial needs of the soldiers stationed at the post, a cemetery was established early in its history. The old post burial ground was later moved to southwest of the post and some 50 remains were moved to this location.

Establishment of the 20-acre Fort McPherson National Cemetery in 1873 afforded the space to relocate remains from the cemeteries abandoned when the number of settlers decreased. Burial records testify that life on the frontier was full of hardships and dangers similar to battlefield camps during times of war.

Monuments and Memorials
The cemetery has a digital carillon system that was donated by the American Veterans, Inc (AMVETS) Department of Nebraska, in partnership with the AMVETS National Foundation.  The  carillon rings during the week to mark the time of day and plays selected devotional music on the weekend.

Sergeant George Jordan (Indian Wars). George Jordan, born about 1850 in Tennessee, enlisted in the U.S. Army in Nashville in 1866. Illiterate at the time, he learned to read and write while in service. Private Jordan transferred to the 9th Cavalry in 1870 and, posted to the Indian Territories, he fought hostile Apache and Sioux tribes. He was promoted to corporal in 1874. In 1890 Sergeant Jordan received the Medal of Honor for holding ground against greater numbers of the enemy in 1880 and 1881. He was the first African American so recognized in two decades. After retiring in April 1897 Jordan remained in Nebraska and, as a landowner, lobbied for the right to vote. In fall 1904 he sought medical attention at the Fort Robinson hospital, but was denied admission; he died that October. Jordan was buried at Fort Robinson and in 1947 his remains were transferred to Fort McPherson National Cemetery, Section F, Site 1131.

Private Daniel H. Miller (Indian Wars). He received the Medal of Honor while serving in the U.S. Army, Company F, 3rd U.S. Cavalry, for actions in the Whetstone Mountains, Arizona Territory, May 5, 1871. Miller died in 1874 and is buried in Section A, Site 380.

Sergeant Emanuel Stance (Indian Wars). Emanuel Stance was born in Louisiana in 1848 and he enlisted in the U.S. Army in 1866. Stance joined Troop F, 9th Cavalry, and spent most of his career on active frontier duty in the Southwest. Sergeant Stance received the Medal of Honor in May 1870 for unquestioned courage. However, he had a volatile personality and drove his men hard. Stance was demoted to private and restored to rank several times. In 1885 Troop F was posted at Fort Robinson, Nebraska. There, Stance was murdered on Christmas Day 1887, likely by his own men. In 1947, his remains were transferred from Fort Robinson to Fort McPherson National Cemetery, Section F, Site 1040.

Born of Oglala-Lakota Indian and French decent, Baptiste “Little Bat” Garnier was a scout for the U.S. Cavalry during the Indian Wars. His reputation grew as he tracked in what many believed to be impossible conditions. His skill earned him the nickname “Chief of Fort Robinson Scouts.” Garnier was shot and killed by a saloon keeper on December 16, 1900. In 1947, Garnier’s remains were disinterred from Fort Robinson, Nebraska, and buried in Fort McPherson National Cemetery (Section S, Site 5900).

Fort McPherson National Cemetery has served as the final resting place for American men and women who have served their country at many different times in many wars throughout the years. In some instances positive identification has been impossible due to the circumstances of the deaths. There are 81 group burials at Fort McPherson National Cemetery, which represent 350 Americans who gave the supreme sacrifice.

In section A, graves 384-389 contain the remains of six members of Company F, 3rd U.S. Cavalry: Edward Doe, Louis Cohn, Theodore Froendle, Dennis Mahony, Daniel Taylor and William Mars, who were drowned on May 31, 1873 in a flash flood which swept through their campsite on Blackwood Creek in the Republican River Valley.

Pvt. Cyrus Fox, 7th Iowa Infantry, was the last surviving Union veteran of the Civil War in Lincoln County, Nebraska. Pvt. Fox, who died in 1942, served under General McPherson for whom the cemetery is named (Section C, Site 1270).”

An impressive white marble monument marks the group burial of 28 enlisted soldiers who were killed in an encounter with the Sioux on August 19, 1854 near Fort Laramie, Wyoming Territory. The incident, commonly known as the Grattan Massacre after Lt. John L. Grattan who led the soldiers, is generally considered by historians to be the opening salvo in a 36 year period of intermittent hostilities between the U.S. and the Sioux Nation, ending with the massacre at Wounded Knee, South Dakota in 1890. Lt. Grattan is interred at Fort Leavenworth National Cemetery in Kansas.

More than half of VA's national cemeteries originated with the Civil War and many are closed to some burials. Other sites were established to serve World War veterans and they continue to expand. Historic themes related with NCA's cemeteries and soldiers' lots vary, but visitors should understand "Why is it here?" NCA began by installing interpretive signs, or waysides, at more than 100 properties to observe the Civil War Sesquicentennial (2011-2015). Please follow the links below to see the interpretive signs for Fort McPherson National Cemetery.