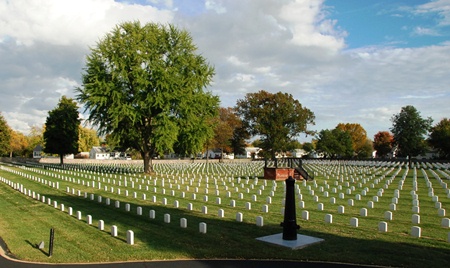 Richmond National Cemetery is closed to new interments. The only interments that are being accepted are subsequent interments for veterans or eligible family members in an existing gravesite. Periodically however, burial space may become available due to a canceled reservation or when a disinterment has been completed. When either of these two scenarios occurs, the gravesite is made available to another eligible veteran on a first-come, first-served basis. Since there is no way to know in advance when a gravesite may become available, please contact the cemetery at the time of need to inquire whether space is available.

Richmond National Cemetery is located in Henrico County, Va., about three miles east of the state capital. The cemetery lies just within the fortification lines constructed by the Confederate army during its defense of Richmond during the Civil War. Three of the cemetery’s 10 acres were purchased in July 1867 from William Slater; additional acreage was subsequently purchased in 1868 and 1906.

The first burials at Richmond National Cemetery were reinterments from Oakwood and Hollywood cemeteries in Richmond, the cemetery at Belle Island Confederate Prison, the battlefields of Cold Harbor and Seven Pines, and from locations in Chesterfield and Hanover counties, Va.

Richmond National Cemetery was listed on the National Register of Historic Places in 1995.

Monuments and Memorials
This cemetery contains no monuments or memorials.

Joseph Anthony Baar (1947-1968) was born in Virginia and he graduated from Highland Springs High School, Richmond, before joining the U.S. Navy. Fireman Baar was one of 99 sailors onboard the nuclear submarine, USS Scorpion, when she disappeared in May 1968. The wreckage of the submarine was found off the coast of the Azores in October that year; the 12 officers and 87 crewmen perished. The cause of the disaster is not known. A memorial service for Baar was held in June 1968. In May 2018, the navy observed the fiftieth anniversary of the loss of the Scorpion with a ceremony attended by the descendants of the lost crew. Baar is memorialized in Richmond National Cemetery (Section 4A).

More than half of VA's national cemeteries originated with the Civil War and many are closed to some burials. Other sites were established to serve World War veterans and they continue to expand. Historic themes related with NCA's cemeteries and soldiers' lots vary, but visitors should understand "Why is it here?" NCA began by installing interpretive signs, or waysides, at more than 100 properties to observe the Civil War Sesquicentennial (2011-2015). Please follow the links below to see the interpretive signs for Richmond National Cemetery.