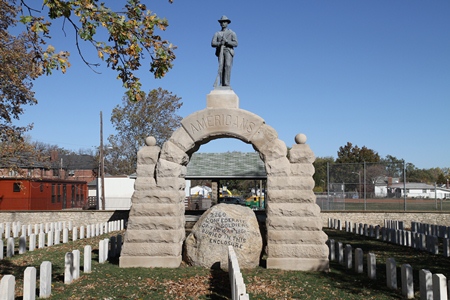 From Dayton take Interstate 70 East and take Wilson Road exit (west of Columbus). Make a left onto Wilson. Follow Wilson Road for 1-2 miles to Sullivant Avenue. Turn left on Sullivant. Cemetery will be one mile on the left.

This soldiers' lot is overseen by Dayton National Cemetery.

Camp Chase shifted from a training camp for Union Army recruits to a prisoner-of-war camp early in the war. The facility was named after Salmon P. Chase, Treasury Secretary under President Abraham Lincoln, and former governor of Ohio. The first inmates at Camp Chase were chiefly political and military prisoners from Kentucky and Western Virginia allegedly loyal to the Confederacy. Union victories at Fort Donaldson, Tennessee, on Feb. 16, 1862, and at Mississippi River Island No. 10, on April 8, 1862, brought an influx of prisoners. All of the officers taken at these battles were moved to Camp Chase, save for generals and field officers, who were sent to Fort Warren in Boston Harbor.

The establishment of the Confederate Stockade on Johnson's Island in Lake Erie led to the transfer of most of the officers to the new prison. Subsequently, enlisted men and non-commissioned officers made up the bulk of the Confederate soldiers confined at Camp Chase. By 1863 Camp Chase held 8,000 men, the peak of the prison population. Similar to many prisons in the north, Camp Chase was ravaged by disease; during late 1864, a smallpox epidemic resulted in many deaths.

Prior to the establishment of the cemetery at Camp Chase, the Confederate dead were interred in the city cemetery of Columbus. Their remains were re-interred in the prison cemetery after its opening. In addition, the remains of 31 Confederate soldiers who died at Camp Dennison, near Cincinnati, were removed to Camp Chase Cemetery shortly after the cessation of the Civil War.

Officially, there is an estimate of 2,168 remains in 2,122 gravesites in Camp Chase Confederate Cemetery. However, this does not match the inscription on the Boulder monument.

The Camp Chase site, including the Confederate Cemetery, was listed on the National Register of Historic Places in 1973.

Monuments and Memorials
There are two monuments in Camp Chase Confederate Cemetery. The first depicts a bronze figure of a Confederate Civil War soldier standing atop a granite arch, his rifle held vertically in front of him, with both hands resting on the top of the barrel. Originally the memorial consisted of a wooden arch inscribed with the word AMERICANS, but in 1902 the wooden arch was replaced with this 17' tall stone memorial.

The second monument is a 3' tall boulder underneath the stone arch. Installed in 1897, the inscription reads: "2260 Confederate Soldiers of the war 1861-1865 buried in this enclosure."

More than half of VA's national cemeteries originated with the Civil War and many are closed to some burials. Other sites were established to serve World War veterans and they continue to expand. Historic themes related with NCA's cemeteries and soldiers' lots vary, but visitors should understand "Why is it here?" NCA began by installing interpretive signs, or waysides, at more than 100 properties to observe the Civil War Sesquicentennial (2011-2015). Please follow the links below to see the interpretive signs for Camp Chase Confederate Cemetery.