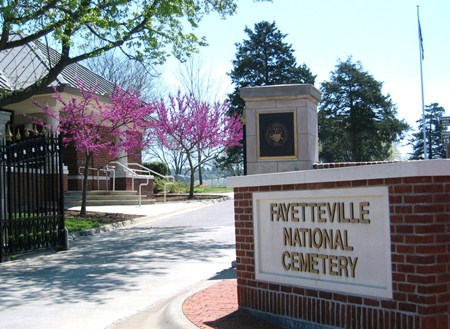 This cemetery is listed on the National Register of Historic Places and the Civil War Discovery Trail.

Artificial flowers will be permitted on graves during periods when their presence will not interfere with grounds maintenance. Artificial flowers are allowed during the period of November 1 through February 28.

During Christmas Season, Christmas wreaths, grave floral blankets, and potted plants will be permitted commencing December 1 and allowed to remain on the grave through January 20. Floral blankets may not exceed two feet by three feet in size.

Permanent plantings, statues, vigil lights, shepherd's hooks, monument saddles, breakable objects and similar items are not permitted on the graves. The Department of Veterans Affairs does not permit adornments that are considered offensive, inconsistent with the dignity of the cemetery or considered hazardous to cemetery personnel. For example, items incorporating beads or wires may become entangled in mowers or other equipment and cause injury.

Permanent flower containers are no longer authorized for placement in national cemeteries.

Disposal of permanent items removed from graves will be governed by the rules of disposal of federal property.

Fayetteville National Cemetery is located on the south side of Fayetteville, AR, about one mile southwest of the old courthouse. Although Frank Pierce, a hunter and trapper, first visited what became the Fayetteville area in 1819, the town was not officially settled until 1828. Within a year, however, residents had built a courthouse and a post office and by 1835 it was officially designated a town. Subsequently, Fayetteville was surveyed, divided into lots and sold at public auction and by 1841, had a population of around four hundred people.

By the beginning of the Civil War, Fayetteville had become a prosperous community. One Union soldier described it as "a beautiful little hamlet nestling among the foothills of the Ozark range...the chief education center of the state, the home of culture, refinement and that inborn hospitality so characteristic of the South." On April 18,1863, this tranquility was interrupted by the fierce Battle of Fayetteville. Hoping to reverse the South's waning fortunes, Confederate General William Cabell led 900 cavalry north from Ozark to attack federal forces occupying Fayetteville. The initial strike surprised most of the Union soldiers, some of who were enjoying a dance at a private home several miles outside of town, and others who were asleep. The federal forces were able to quickly recover and, primarily due to superior weapons, pushed back the Confederate charge.

In 1867, the first five acres for the national cemetery were purchased from local residents David Walker and Stephen K. Stone. The original layout of the cemetery, according to a sketch, is of an outer circle surrounding a six-pointed star with diamonds between the points of the star and a flagpole in the center. There were eighteen sections with an estimated capacity of 1,800 graves. During World War II, the layout was revised and five sections were added.

The first burials were the remains of Union soldiers disinterred from local Civil War battlefields such as Pea Ridge, Prairie Grove and Elk Horn Tavern. Interments were originally made with the headstone and inscription facing the flagpole. An inspection report dated May 1871 states there were 1,210 interments in the cemetery, "the greater portion being unknown white soldiers." When the new sections were added in the mid-20th century cemetery, the placement of headstones was altered so that the inscriptions face the interred remains.

In 1989, the Regional National Cemetery Improvement Corporation, a group of citizens, veterans, and officials of the city of Fayetteville and the state of Arkansas, formed to raise funds to purchase land for the expansion of the cemetery. On January 26, 1990, the Secretary of Veterans Affairs accepted their donation of three acres of land adjacent to the cemetery.

Fayetteville National Cemetery was placed on the National Register of Historic Places on July 28, 1999 and later added to the Civil War Discovery Trail.

Monuments and Memorials
A carillon was donated by the American Veterans as part of their international living-memorial program, which began shortly after World War II.

The Revolutionary War Soldier Memorial and 1st Marine Division memorials were installed during the 1990s.

A Purple Heart Memorial was dedicated in 2000 in honor of all Purple Heart recipients interred at the cemetery.

Sergeant First Class Clarence B. Craft (World War II). He received the Medal of Honor while serving in the U.S. Army, Company G, 382nd Infantry, 96th Infantry Division, for actions on Hen Hill, Okinawa, Ryukyu Islands, May 31, 1945. Craft died in 2002 and is buried in Section 17, Site 120.

Other Burials
James C. Putnam, an original founder of the Veterans of Foreign Wars and the first National President of the VFW. (Section 15, Site 54)

More than half of VA's national cemeteries originated with the Civil War and many are closed to some burials. Other sites were established to serve World War veterans and they continue to expand. Historic themes related with NCA's cemeteries and soldiers' lots vary, but visitors should understand "Why is it here?" NCA began by installing interpretive signs, or waysides, at more than 100 properties to observe the Civil War Sesquicentennial (2011-2015). Please follow the links below to see the interpretive signs for Fayetteville National Cemetery.