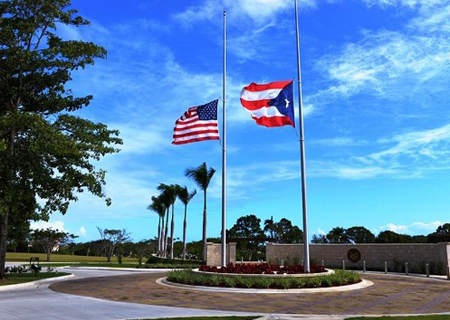 The cemetery is located approximately 1.5 miles Northwest of Bayamon and about 13 miles from San Juan. From Luis Muñoz Marin International Airport, take Baldorioty De Castro Avenue (West toward San Juan on state road 26), stay on the route to Bayamon (state freeway 22), and continue to Exit 13, Avenida Comerio, (state road 167). At the end of the ramp, turn left, continue under the bypass, at the third traffic light, make a right turn, continue to first traffic light, turn left and the cemetery will be on your left.

Welcome to Puerto Rico National Cemetery. We hope you find peace amid these quiet and beautiful grounds and visit us again.

Families often contact us during a difficult time - after the loss of a loved one.

We are here to make the burial process as comfortable as possible. We encourage veterans and their families to talk with us in advance for information or about any questions or concerns.

When the time comes, we will ensure the committal service and any other requests are handled respectfully. We pledge to honor the dignity and memory of each person and to provide excellent service to family and friends during this difficult time.

Puerto Rico National Cemetery became a national cemetery on July 12, 1948. The cemetery serves over 150,000 veterans in Puerto Rico, US Virgin Islands, the Caribbean Region, and Central and South America. Situated on 108.2 acres of which 77.31 are being developed or have been developed, the cemetery accommodates casketed and cremated remains. Over 1,900 burials are conducted each year. The cemetery has the only Memorial Program Service Marker Processing Center site located in a national cemetery and outside of the United States. This is the only national cemetery outside of the United States. In 1962, the remains of those interred on all other five military cemeteries on the island were transferred here.

Our cemetery floral regulations exist only to reflect the honor and respect we hold for our Nation's Veterans and their loved ones, by preserving the dignity and solemnity of their final resting place.

We welcome and encourage fresh-cut flowers throughout the year and provide flower containers for gravesite display. Items left at the grave must be floral in nature and may not stand taller 18 inches. Other items, to include hazardous materials, glass, metal, toys, candles, balloons and flags are not permitted. Unauthorized items will be removed. Flowers will be removed when they become unsightly, for mowing and maintenance, or if damaged by weather or wildlife. Due to the open nature of the grounds, we cannot guarantee against theft, vandalism or the effects of nature.

All flowers will be removed:

During the Holiday season, (December 15 through January 10) potted plants, artificial flowers, wreaths (less than 18 inches in diameter) and grave blankets (less than 2 X 3 feet) are permitted. During Easter and Memorial Day articles may be placed on gravesites up to one week before the holiday. The cemetery staff will remove items 10 days after the holiday. For Mother’s Day and Father’s Day, we will remove the items the next week.

Unauthorized items which have been removed from gravesites will be kept in a holding area for two weeks. Please check with cemetery office for location of holding area.

The cemetery is not responsible for the loss or deterioration of potted plants, vases or flowers. Installing of permanent floral vases are not permitted.

In order to preserve the dignity and honor of our Veterans’ final resting place, please observe the following rules of behavior while visiting the cemetery grounds:

We thank you in advance for providing the respect our Veterans are due by observing the above listed rules. Our Nation's Heroes, some of whom gave their lives for this country, deserve no less than an honorable and pristine landscape to make their final rest.

The Puerto Rico National Cemetery is located on the north side of the island in Bayamon, Puerto Rico, and is approximately 13 miles from San Juan, the capital. The cemetery serves as an American presence on the island and many distinguished Puerto Ricans who served in the U.S. military are interred there.

The 108.2-acre cemetery was dedicated on Veteran’s Day in 1949 and it is the only national cemetery located in Puerto Rico. According to El Diario, the local newspaper, the dedication was attended by both local and military officials such as Luis Munoz-Marin, the Governor of Puerto Rico, and Major General Herman Feldman, the Quartermaster of the U.S. Army. In his remarks during the dedication, Feldman noted that, "practically every family in Puerto Rico had a representative in uniform during World War II." Since its dedication, Puerto Rico National Cemetery has been a shrine to Puerto Ricans who served in the armed forces.

The cemetery was listed on the National Register of Historic Places on Sept. 26, 1983.

Private First Class Fernando Luis Garcia-Ledesma (Korea). Fernando Luis Garcia-Ledesma, native of Puerto Rico, joined the U.S. Marine Corps on September 19, 1951. He served in Company I, 3rd Battalion, 5th Marines, 1st Marine Division. On September 5, 1952, less than a year in service, a wounded Garcia-Ledesma was under heavy attack from enemy forces while attempting to secure weapons. Without regard for personal safety he threw himself on a grenade and saved a comrade. Private First Class Garcia-Ledesma received the Medal of Honor posthumously on October 25, 1953. He is memorialized in Section MB, Site 3.

Sergeant Major Juan Enrique Negron-Martinez (Korea). Juan Enrique Negron-Martinez, native of Puerto Rico, enlisted in the U.S. Army in March 1948 and served in Company L, 65th Infantry Regiment, 3d Infantry Division. The 65th Infantry is known as the Borinqueneers, after the soldiers’ Puerto Rican heritage. On April 28, 1951, Sergeant Major Negron-Martinez took the most vulnerable position while fighting the enemy in Kalma-Eri, Korea. When his company began to withdraw, he continued his assault while the company organized and launched a counterattack. Negron-Martinez received numerous medals for his service and stayed in the army until March 1971. Negron-Martinez was awarded the Medal of Honor on March 18, 2014, posthumously. He died March 29, 1996, and is buried in Section J, Site 3180.

Captain Euripides Rubio, Jr. (Vietnam). Euripides Rubio, Jr., native of Puerto Rico, enlisted in the U.S. Army on March 18, 1959, and was a communications officer with Headquarters Company, 28th Infantry, 1st Infantry Division. On November 8, 1966, in Tay Ninh Province, Captain Rubio and his comrades were heavily attacked by enemy forces. Although injured twice, he assumed command and redirected an air strike before dying of his wounds, for which Rubio, Jr., received the Medal of Honor. He is buried in Section HSA, Site 5.

Diana Beatriz Borrero de Padro was born in 1946. She enlisted in the Army in 1978 and served for four years. Specialist Technician Padro served at Fort Hood, TX, and at Fort Clayton, Panama. In 2001, she worked as a civilian accountant for the Department of the Army. She was killed in the September 11 terrorist attack on the Pentagon, and was buried in Puerto Rico National Cemetery on December 2, 2001 (Section E, Site 2247).

As a recently commissioned lieutenant in the U.S. Army Medical Corps, Col. Ashford accompanied a military expedition to Puerto Rico in 1898. Serving as the medical officer in the general military hospital in Ponce, Puerto Rico, he was the first to describe and successfully treat North American hookworm in 1899. He was a tireless clinician and conducted an exhaustive study of the anemia caused by hookworm infestation, which was responsible for as many as 12,000 deaths a year. From 1903-1904, he organized and conducted a parasite treatment campaign, which cured approximately 300,000 persons (one-third of the Puerto Rico population) and reduced the death rate from this anemia by 90 percent.

Captain Ashford was a founding member of the Puerto Rico Anemia Commission and, by special authority of the Secretary of War, served on the Commission from 1904-1906. In 1911, his proposal for an Institute of Tropical Medicine in Puerto Rico was approved by the legislature. After serving as a commander of the Army Medical Department's First Division during the First World War, Colonel Ashford was assigned to San Juan and campaigned for the development of "a real school of tropical medicine in the American tropics". The School of Tropical Medicine in San Juan was formally dedicated in 1925. After a 30-year Army career, Dr. Ashford assumed a full time faculty position at the School and continued his interest in tropical medicine. His writings include: Anemia in Puerto Rico, 1904; and uncinariasis in Puerto Rico, 1911.

Modesto Cartagena is the most decorated Hispanic soldier to serve in the Korean War. Cartagena enlisted in the U.S. Army in 1942 and was assigned to the all-Puerto Rican 65th Infantry Regiment, nicknamed the Borinqueneers (derivation of Borinquen, the island name used by original inhabitants, the Taino Indians). He fought in Europe during World War II, earning Bronze and Silver stars. During the Korean War, SGT FC Cartagena saved the lives of his unit by charging into enemy fire and “single-handedly" knocking out enemy emplacements before being wounded. This action earned him the Distinguished Service Cross. The Legislative Assembly of Puerto Rico awarded him its Military Medal of Honor for his notable career. The Borinqueneers were also honored with the Congressional Gold Medal in 2014 for bravery in battle, becoming the first Hispanic military unit to receive the award. Cartagena died in 2010. (Section P, Site 1864).

Elmy Luis Matta was born in Puerto Rico, in 1921. One of six children, he attended grammar school and enlisted in the army during World War II. 1st Lieutenant Matta also served in Korea, where he commanded Company F, 2nd Battalion, 8th Cavalry, 1st Cavalry Division. On August 3, 1950, he led an assault on an enemy road block and was killed in action. Matta received the Distinguished Service Cross for his actions that day as well as the Purple Heart. He was buried in Puerto Rico National Cemetery on July 18, 1951 (Section A, Site 41).