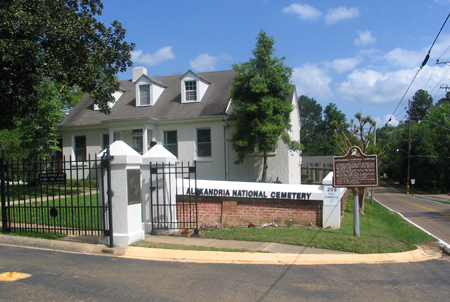 Visitation Hours: Open Monday thru Friday from 8:00 a.m. to sunset.

Alexandria National Cemetery is closed to new interments. The only interments that are being accepted are subsequent interments for veterans or eligible family members in an existing gravesite. Periodically however, burial space may become available due to a canceled reservation or when a disinterment has been completed. When either of these two scenarios occurs, the gravesite is made available to another eligible veteran on a first-come, first-served basis. Since there is no way to know in advance when a gravesite may become available, please contact the cemetery at the time of need to inquire whether space is available.

From Esler Regional Airport sign, take Highway 28 west approximately 10 miles. Go under the Alexandria Expressway and get in the left turn lane. Take the ramp onto the Alexandria Expressway and from the expressway take the first exit on the right staying in the right lane. Turn right at the stop sign onto Melrose Street. Follow Melrose over the railroad tracks and turn right at red light onto Shamrock Street. Take Shamrock approximately three blocks to the cemetery. The cemetery is on the right.

The cemetery, rectangular in shape, is located in Rapides Parish near Alexandria, Louisiana.

Artificial flowers and potted plants will be permitted on graves during periods when their presence will not interfere with grounds maintenance. The cemetery director, in coordination with the network office, determines these periods for each cemetery depending on climate and other factors. As a general rule, artificial flowers and potted plants will be allowed on graves for a period extending 10 days before through 10 days after Easter Sunday and Memorial Day.

Alexandria National Cemetery is located in the community of Pineville, Rapides Parish, La. In 1804, under the new U.S. Territorial government, Rapides became one of the 12 parishes into which the Territory of New Orleans (later the State of Louisiana) was divided and, by 1805, a crude settlement had developed at the site below the rapids named Alexandria. When Abraham Lincoln was elected president in fall 1860, the people of Alexandria and Pineville saw the handwriting on the wall. On Jan. 26, 1861, the citizens of Louisiana voted for secession and swiftly committed to joining the Confederacy.

Ships appeared at the mouth of the Mississippi River determined to go upriver and capture New Orleans in May 1862. Within a year, Rapides Parish citizens were shocked when they realized their homes, the roads leading through Alexandria parish and other crossroads villages of the parish might become part of the battlefield.

Between 1863 and early 1864, the area was invaded twice. Plantations were laid waste, houses burned, fences torn down, trees cut for firewood and sugarhouses and barns burned. Both armies lived off the land, taking away food, livestock and poultry. The final destruction of Alexandria occurred on May 13, 1864, when Alexandria was burned to the ground by Union troops.

After the war, federal troops moved into the region to begin the process of reconstruction. In 1867, an eight-acre plot was appropriated from local resident François Poussin for the establishment of a national cemetery for deceased Union soldiers who died in the region. Approximately a decade later, a suit was filed by Poussin’s heirs and the United States was ordered to pay his descendents $1,200 for title to the property. Bodies were removed from the surrounding towns such as Mount Pleasant, Cheneyville and Yellow Bayou and reinterred in Alexandria. Later, remains from Fort Brown, Texas, were reinterred at the national cemetery when the fort was no longer deemed necessary. Alexandria (LA) National Cemetery was placed on the National Register of Historic Places in 1997.

Monuments and Memorials
The 1911 granite Memorial to Unknowns marks the burial of 1,537 unknown Federal soldiers who were removed from the Brownsville National Cemetery and re-interred at Alexandria National Cemetery.

Another 1911 granite Memorial to Unknowns marks the burial of 16 unknown federal soldiers who were removed from the Fort Ringgold Post Cemetery (Texas) and re-interred at Alexandria National Cemetery.

The remains of 25 unknown soldiers from post and private cemeteries near Fort Jessup, La., are also interred in one grave and it's marked with a white government marker.

Other Burials
There are 57 Buffalo Soldiers interred at the Alexandria National Cemetery. They represent the following units: 24th Infantry, 10th Calvary, and the 9th Calvary and are interred in Sections A, B, C, and R.

Major Jacob Brown, for whom Fort Brown, Texas, was named, is buried in Section B, Site 1. He died from wounds received during a skirmish with Mexican soldiers in 1846.

Roscoe Monroe Merrick was born in December 1928 in Kansas, shortly after his father died; as a teen he was adopted by his stepfather and wrestled in high school. Seaman Second Class Brumbaugh joined the U.S. Navy at 17 and served aboard the USS Nereus in 1946-1947. After his tour, Brumbaugh returned to wrestling as a professional. Promotors invited him to Tennessee where he pinned his biggest opponent – segregation. Brumbaugh, known as "Sputnik Monroe," used his popularity to force integration of sporting events in Memphis's Ellis Auditorium. Outside the ring, Brumbaugh was arrested for interracial socializing on Beale Street; undeterred, he chose black attorney Russell Sugarman to represent him. In the 1970s, he and a black wrestling partner introduced tag team showmanship to Memphis and the duo confronted racial tension through their wrestling performances. Brumbaugh died November 3, 2006, and is buried at Alexandria National Cemetery (Section C, Site 77C).

Texas-born Charles S. Stroup enlisted in the U.S. Army in 1917 and served during World War I. Private First Class Stroup completed his tour in March 1919. He married later that year and the couple had two children in the 1920s. Stroup supported his family as a watchmaker. After his wife’s death in 1929, the young widower returned to his parents’ house in Greenville, Texas. By 1942, Stroup was employed by the Quartermaster Corps in San Antonio as a civilian patrolman at Fort Sam Houston. Stroup then embarked on a career as a superintendent of national cemeteries: from 1946 to 1962, he oversaw the properties at Port Hudson (LA), Alexandria (LA), and Fort Leavenworth (KS). Stroup died July 15, 1965, and is buried in Alexandria (LA) National Cemetery (Section E, Site 27).

More than half of VA's national cemeteries originated with the Civil War and many are closed to some burials. Other sites were established to serve World War veterans and they continue to expand. Historic themes related with NCA's cemeteries and soldiers' lots vary, but visitors should understand "Why is it here?" NCA began by installing interpretive signs, or waysides, at more than 100 properties to observe the Civil War Sesquicentennial (2011-2015). Please follow the links below to see the interpretive signs for Alexandria National Cemetery.