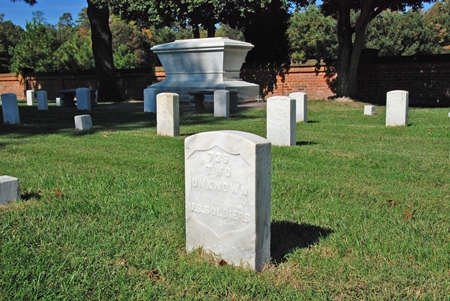 A headstone marking two unknown Civil War soldiers with the Tomb of the Unknown Soldier in the background at Cold Harbor National Cemetery.

Cold Harbor National Cemetery is closed to new interments. The only interments that are being accepted are subsequent interments for veterans or eligible family members in an existing gravesite. Periodically however, burial space may become available due to a canceled reservation or when a disinterment has been completed. When either of these two scenarios occurs, the gravesite is made available to another eligible veteran on a first-come, first-served basis. Since there is no way to know in advance when a gravesite may become available, please contact the cemetery at the time of need to inquire whether space is available.

Cemetery is located on Virginia State Highway 156, about seven miles east of Mechanicsville, Va., Route 156 entered from Route 360 at Mechanicsville. Cemetery may also be reached from Interstate 64, exiting at Highland Springs exchange to Nine Mile Road, then right (south) for about one mile to State Highway 156 at Southern Railroad crossing. Turn left (north) on Highway 156. Cemetery is located approximately seven miles from this point. Cemetery directional signs are posted en route.

The Hampton National Cemetery manages this cemetery. You may contact the director at the number listed above.

Cold Harbor National Cemetery, established in 1866, is located on the site of the Battle of Cold Harbor, a clash that would be General Robert E. Lee's "last great battle in the field," and the only one Union General Ulysses S. Grant would regret. It is one of six Civil War-era cemeteries maintained by the Department of Veterans Affairs in the Richmond, Va., area. All these national cemeteries are historically linked to the Union assault on the southern capital: Seven Pines, Richmond, Glendale, City Point and Fort Harrison.

The 1.4-acre Cold Harbor Cemetery is preserved in a relatively rural context, partly due to neighboring lands that are part of the discontiguous Richmond National Battlefield Park, which is managed by the National Park Service. Across the road is the Garthright house, which served as a Union field hospital from June 3-12, 1864. The Battle of Cold Harbor (or Gaines Hill) occurred in June 1864, although cemetery burials were collected here from a 22-mile area.

The layout is typical for small, older cemeteries, that of a nearly perfect square with two 10'-wide bisecting paths and a central flagpole. Before, the permanent masonry structures were constructed, the keeper resided in a white "wooden cottage" surrounded by a white picket fence and Osage orange hedge that kept animals from disturbing the graves. Now, the cemetery features a standard masonry Second Empire lodge designed by Quartermaster General Montgomery C. Meigs and a paneled brick enclosure wall. These were both constructed in 1871. By this date, just over $18,000 had been spent on the cemetery.

In the early 20th century, service structures including tool, well and oil houses were built and rebuilt. Civil Works Administration laborers did much of this construction during the 1930s.

During the late 19th century, Cold Harbor was designated a third-class cemetery, a rating based on size and activity (by comparison, Richmond National Cemetery was rated first-class). Acquisition of the land by the U.S. government was formally completed in 1870 for $200, but the next year additional border acreage was purchased for about $300. One of the first superintendents at the cemetery, Augustus Barry, is the only Medal of Honor recipient buried here. Cold Harbor National Cemetery was listed on the National Register of Historic Places in 1995.

Monuments and Memorials
The Tomb of the Unknown Soldier, built in 1877, is a 5-foot high marble sarcophagus erected by the U.S. government at a cost of $2,151. It commemorates 889 unknown Union dead who were buried in nearby trench graves located on the battlefields of Mechanicsville, Savage-Station, and Gaines Mills.

The Pennsylvania Monument, built in 1909, was erected by the Commonwealth of Pennsylvania to commemorate the losses of its regiments that fought at Cold Harbor in 1864. The dedication ceremony, 45 years later lasted six days and was attended by 690 of 937 surviving veterans of these troops and commonwealth officials. A memorial commission was established in 1907, which set a limit of $5,000 for the cost to build the memorial. Architect J. Henry Brown of Richmond designed the more than 30-foot tall granite shaft topped by a soldier standing at parade rest.

The 8th New York Heavy Artillery Monument was erected in 1909 by the state of New York to honor the 219 members of this regiment who died as a result of the Battle of Cold Harbor. The granite block features a bronze tablet on which the names of the dead are listed.

One inverted cannon was installed by 1871 bearing a bronze plaque that identifies the location of the cemetery and number of dead interred there.

More than half of VA's national cemeteries originated with the Civil War and many are closed to some burials. Other sites were established to serve World War veterans and they continue to expand. Historic themes related with NCA's cemeteries and soldiers' lots vary, but visitors should understand "Why is it here?" NCA began by installing interpretive signs, or waysides, at more than 100 properties to observe the Civil War Sesquicentennial (2011-2015). Please follow the links below to see the interpretive signs for Cold Harbor National Cemetery.