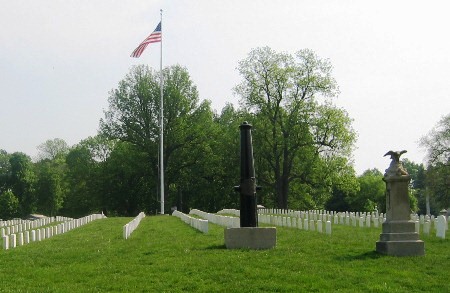 Crown Hill Columbarium Annex is a new 15-acre Department of Veteran Affairs (VA) national cemetery. This cemetery will serve the needs of more than 250,000 Veterans and eligible family members within a 75-mile radius for the next 100 years. The columbarium will only accommodate above-ground burial of cremated remains; Veterans and eligible dependents desiring in-ground burial of casketed or cremated remains may opt for the nearest open VA national cemetery, which is Marion National Cemetery approximately 75 miles away. This cemetery is under the supervision of Dayton National Cemetery.

The historic national cemetery, opened in 1866, has been closed to new interments since 1959.

No object should be attached to a niche cover. All flowers, wreaths, decorations, etc. should be placed at the base of the columbarium beneath the niches.

Artificial flowers may only be placed at the columbarium from October 10th through April 15th.

Plantings will not be permitted at the columbarium at any time. Potted plants will only be permitted 10 days before and 10 days after Easter Sunday and Memorial Day.

Christmas decorations are permitted during the Christmas season commencing December 1st and will be removed after January 20th each year.

Floral items will be removed from the columbarium as soon as they become withered, faded or unsightly.

Permanent plantings, statues, battery or solar powered items, balloons, breakable objects and other commemorative items are not permitted at any time.

The Department of Veterans Affairs does not permit adornments that are considered offensive, inconsistent with dignity of the cemetery or that present a safety hazard.

Monuments and Memorials
The Women's Relief Corps No. 44, auxiliary to Grand Army of the Republic (GAR) Post 369, Department of Indiana, erected a limestone monument here to the unknown dead. Carved by Indianapolis stonecutter James F. Needler with an eagle, draped flag, and cannon, its dedication was a special addition to the usual Memorial Day program in 1889.