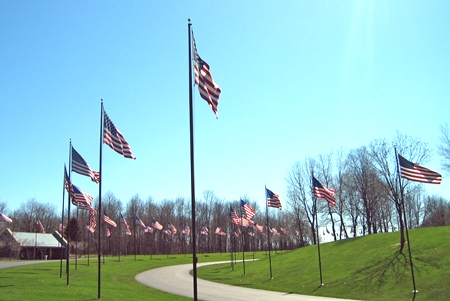 COVID-19 Mask Requirements
Beginning July 30, 2021, all Federal employees, onsite contractors, and visitors, regardless of vaccination status, must wear a mask inside Federal buildings located in areas of "substantial" or "high" community transmission. Masks must cover the nose and mouth, fit snuggly around the nose and chin with no large gaps around the sides of the face and adhere to CDC and OSHA guidance.

Generally, masks do not need to be worn outdoors. However, masks should be worn in outdoor shared spaces when physical distancing cannot be maintained for unvaccinated individuals. Even fully vaccinated people may consider wearing a mask in crowded outdoor areas or when in close contact with others who are not fully vaccinated in areas of the country with high numbers of COVID-19 cases: CDC COVID Data Tracker.

Military Funeral Honors
Full military funeral honors are offered to every veteran interred at Fort Custer. This includes a rifle salute, playing of taps, folding of the flag and presentation of the flag to the next-of-kin. Funeral Home Directors or the Next of Kin are responsible to contact the Branch of Service, (Army, Navy, Air Force, Marine Corps, and Coast Guard) the Veteran served to request and schedule Military Honors, (folding and presenting the flag to the next of kin). Fort Custer National Cemetery has 5 different honor guard squads (a different Squad each day of the week) who will perform the rifle salute and taps portion of military honors. Full Military Honors are available to be scheduled during the hours of 9:30 a.m. through 3:00 p.m. (except 12:30 p.m.) at half hour intervals. Refer to the Military Funeral Honors page for more information.