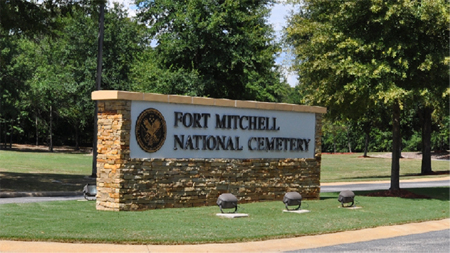 Plastic vases are available at the cemetery for public use. They are in metal boxes in front of each burial section with the floral policy printed on the box. These vases have a plastic spike to hold them in place in the ground.

Floral arrangements accompanying the casket or urn at the time of burial will be placed on the completed grave. We recommend that expensive baskets and living plants be taken home following the committal service and ask that no more than four (4) wreaths be left for placement on the new grave site, or one, 2' x 3' floral grave blanket.

Natural cut flowers may be placed on graves at any time of the year. They will be removed when they become unsightly or when it becomes necessary to facilitate cemetery operations such as mowing. A sweep for unsightly flowers is generally conducted every 1st and 3rd Thursday.

Artificial flowers and potted plants will be permitted on graves during periods when their presence will not interfere with grounds maintenance. This is generally April 1 through October 1; however, weather dictates ground maintenance schedules. As a general rule, artificial flowers and potted plants will be allowed on graves for a period extending 10 days before through 10 days after Easter Sunday and Memorial Day. Disposal dates of holiday flowers, wreaths, and ornaments is dependent on weather conditions.

Christmas wreaths, grave blankets no larger than 2' x 3', and other seasonal adornments may be placed on graves from December 1 through January 1. They may not be secured to headstones or markers. Disposal dates of holiday flowers, wreaths, and ornaments is dependent on weather conditions.

Permanent plantings, balloons, statues, vigil lights, breakable objects and similar items are not permitted on the graves. Nothing that is breakable, extends above, attaches to, or could possible stain the headstone is authorized. The Department of Veterans Affairs does not permit adornments that are considered offensive, inconsistent with the dignity of the cemetery or considered hazardous to cemetery personnel. For example, items incorporating beads and wires may become entangled in mowers or other equipment and cause injury.

Be aware that deer and other wild life frequently eat fresh flowers and displace artificial flowers after tasting them and finding them to be artificial. Eaten and displaced floral arrangements are discarded.

Permanent flower containers are not permitted on gravesites at this National Cemetery. Attempts to paint, stain, mark, attach adhesive, tape, glue, or decals, is vandalism of Federal property.

Fort Mitchell is located south of Phenix City in Alabama, adjacent to the state-owned and operated Fort Mitchell Park. The Georgia Militia originally constructed Fort Mitchell in order to sustain a military presence in the area during the Creek War of 1813 to 1814. Shortly after the fort's completion, the Georgia Militia launched an attack against the British at Tuckabatchie and Hothlewali. The militia was ambushed and driven back to Fort Mitchell by a combined force of Creeks and British. Thereafter, until 1825, a small force continued to garrison at the fort.

From 1817 to 1825, Fort Mitchell gradually emerged as a center of commerce for trade with Native Americans. In 1817, a trading house, or factory, was established where produced goods were available to local tribes at prices below what they could otherwise afford. In 1818, a post office was added to the newly extended Federal Road that crossed through Fort Mitchell from Augusta, GA, and westward into the Alabama frontier.

In 1821, an Indian agency was created at Fort Mitchell, and Colonel John Crowell was appointed agent to the Creeks. While Crowell managed the agency, his brother, Thomas, ran the tavern, which later served as an officer's quarters.

Fort Mitchell became central to the protection of Native Americans as settlers consistently violated the Creek territory as defined under terms of the 1814 Treaty of Fort Jackson. In response to Native American protests, a new fort was constructed and occupied by the 4th U.S. Infantry in summer 1825, and it remained garrisoned almost continually through 1840. The second fort encompassed the first, and while much larger, was similar in design.

In 1831, a group of white settlers invaded the Indian community of Ola Ufalal (now Eufaula), evicted the Creeks, burned their houses, and built their own settlement. The U.S. marshal protested the settlers' actions, and when defied, the commandant at Fort Mitchell dispatched a company to demand the surrender and evacuation of the town. The residents complied and retreated across the Chattahoochee River.

President Andrew Jackson was committed to a policy of removing Native Americans, however, and was not eager to use force against settlers who were supported by the laws of Georgia and Alabama. For every ejection of a trespasser evacuated by troops at Fort Mitchell, 10 intruders would cross the river and enter Creek territory.

The hopelessness of the military's position was reflected in the celebrated Hardeman Owen killing. Owen had planned but failed to murder the U.S. marshal. Troops at Fort Mitchell were called out to capture Owen, and in the ensuing melee he was killed. Georgia authorities charged the trooper who fired the fatal shot with murder and demanded the Army hand him over. The commandant refused. Tensions ran high and almost erupted into open warfare. In an attempt to settle the dispute, Francis Scott Key was dispatched by the administration to investigate the affair. He took up residence at Fort Mitchell and composed a report on the condition of the Creeks and the cause of the recent turmoil. He charged that the evils perpetrated on the Native Americans were caused by the weakness of the U.S. government in facing the aggressive actions of the settlers. Key went on to negotiate a settlement, which, after he returned to Washington, was rarely honored.

Creek desperation reached a crisis point in spring 1836. Under the leadership of Chief Eneah-Mathla, an estimated 1,500 warriors attacked the settlements. General Winfield Scott was ordered to intervene and succeeded in overcoming the attack. By July 1836, an estimated 1,600 Creek people were concentrated at Fort Mitchell in preparation for a forced expulsion West. Approximately 2,000 to 3,000 were eventually marched from Fort Mitchell to Montgomery, "shedding tears and making the most bitter wailings." This route is known as the Trail of Tears.

In late 1980s, the old post cemetery at Fort Mitchell was officially identified as the location for a national cemetery in Federal Region IV, to serve veterans residing in North Carolina, South Carolina, Georgia, Florida, Alabama, Tennessee and Mississippi. In May 1987, the 280-acre national cemetery opened.

Sergeant Matthew Leonard (Vietnam). Matthew Leonard was born November 26, 1929, in Alabama. He enlisted in the U.S. Army in Birmingham about 1949. Sergeant Leonard served in Korea and Vietnam. He was killed in action on February 28, 1967, when his platoon came under attack. Leonard organized a defense, protected the wounded, galvanized his men, and charged the enemy position. Although injured, he destroyed the enemy and propped himself against a tree to continue the fight. He died there. He received the Medal of Honor for bravery and risk of life beyond the call of duty. Initially interred in Birmingham's Shadow Lawn Cemetery, his remains were moved to Fort Mitchell National Cemetery in 2000, Section 14, Site 27.