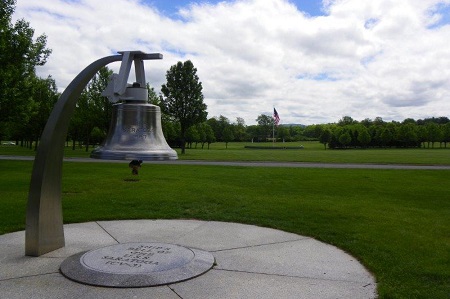 To volunteer at the national cemetery, please complete VA Form 10-7055 and fax it to the cemetery at the number above.

Cemetery Honor Guard
The Gerald B. H. Solomon Saratoga National Cemetery has an Honor Guard Association, which consists of five squads of 12-18 volunteers each. The principal duty of the Honor Guard is to ensure that every veteran receives a proper military burial service. This service is available at no charge to all eligible veterans. Cemetery Honor Guard and Military Funeral Honors can work together. This consist of a rifle salute, flag presentation and the playing of Taps. Cemetery Honor Guard should be arranged through the funeral home.

Floral arrangements accompanying the casket or urn at the time of burial will be placed on the completed grave. Natural cut flowers may be placed on graves at any time of the year. They will be removed when they become unsightly or when it becomes necessary to facilitate cemetery operations such as mowing. Floral pick up is the second and fourth Tuesday of each month.

Potted plants of any size and permanent vases are not permitted.

Artificial flowers are permitted on gravesites from October 10 through April 15 and the 10 day period before and after Easter, and are subject to floral pick ups when they become unsightly or to facilitate cemetery operations.

Christmas Wreaths, grave blankets and other seasonal arrangements may be placed on graves beginning December 1 and will be picked up by January 20 (weather conditions permitting).

Permanent plantings, statues, vigil lights, attachments to headstones/markers, flag holders, flags, breakable objects and similar items are not permitted on the graves. The Department of Veterans Affairs does not permit adornments that are considered offensive, inconsistent with the dignity of the cemetery or considered hazardous to cemetery personnel. For example, items incorporating beads or wires may become entangled in mowers or other equipment and cause injury.

More than 1.4 million veterans live in New York and more than 225,000 reside in the Albany/Saratoga area. The first phase of construction, encompassing 60 acres of the 351-acre cemetery, included 5,000 gravesites, 2,000 lawn crypts, 1,500 columbaria niches and 700 garden niches for cremated remains. At full capacity, Solomon-Saratoga can provide burial space for 175,500 veterans and eligible dependents.

On Jan. 24, 2002, President George W. Bush signed legislation renaming Saratoga National Cemetery as the Gerald B. H. Solomon Saratoga National Cemetery. Congressman Solomon was known as the champion of veterans' causes. Among his accomplishments, he spearheaded the effort to create the cabinet-level Department of Veterans Affairs and successfully led a drive to establish the national cemetery in which he is now interred.

Monuments and Memorials
The ship’s bell from the USS Saratoga, CV-3, was installed as a memorial at the cemetery in 1999. The USS Saratoga was launched in 1925 and spent 20 years at sea, including action during World War II. It was taken out of service and destroyed in 1946. New York Congressman Dean P. Taylor requested the bell in 1946. It was first displayed at Saratoga Spring’s Veterans of Foreign Wars (VFW) Memorial Home, dedicated on Veteran’s Day in 1949. The bell was later restored and permanently mounted at the Gerald B.H. Solomon Saratoga National Cemetery.

An American gray granite memorial was erected in 2001 to honor veterans from Saratoga County, N.Y. The monument features two granite slabs inscribed with approximately 980 names of individuals who gave their lives for their country. A granite obelisk is at the forefront of the monument.

A pyramidal black-mist granite memorial for Congressman Gerald B.H. Solomon, who was instrumental in the national cemetery’s establishment and a proponent of veteran causes, was erected in 2002, the year the cemetery was renamed in his honor.

A granite and bronze memorial was erected in honor of U.S. submariner veterans on Oct. 19, 2002.

The cemetery also has a walkway that features a number of memorials erected by various veterans and fraternal organizations in honor of events and fallen comrades.

The American Veterans (AMVETS) donated a carillon in 1999.

Sergeant Thomas A. Baker (World War II). He received the Medal of Honor posthumously for service in the U.S. Army, Company A, 105th Infantry, 27th Infantry Division, in recognition of gallantry and intrepidity at the risk of his life at Saipan, Mariana Islands, June 19-July 7, 1944. Baker died July 7, 1944, and is buried in Section 8, Site 530.

Specialist Fourth Class Raymond R. Wright (Vietnam). He received the Medal of Honor while serving in the U.S. Army, Company A, 3rd Battalion, 60th Infantry, 9th Infantry Division, for actions in Ap Bac Zone, Republic of Vietnam, May 2, 1967. Wright died in 1999 and is buried in Section 7, Site 1035.