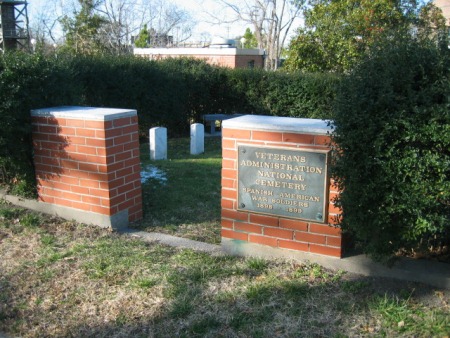 Hampton National Cemetery (VAMC) is closed to new interments. The only interments that are being accepted are subsequent interments for veterans or eligible family members in an existing gravesite. Periodically however, burial space may become available due to a canceled reservation or when a disinterment has been completed. When either of these two scenarios occurs, the gravesite is made available to another eligible veteran on a first-come, first-served basis. Since there is no way to know in advance when a gravesite may become available, please contact the cemetery at the time of need to inquire whether space is available.

This small parcel of land, less than one-fifth acre, is located on the grounds of the Hampton Veterans Affairs Medical Center complex in Hampton, Va. Composed of 22 graves aligned in three rows, it is the smallest cemetery overseen by VA.

Hampton National Cemetery (VAMC) was established in 1898 on the grounds of the Southern Branch of the National Home for Volunteer Soldiers and Sailors as an emergency measure during a Yellow Fever epidemic at the station. All men who died during the quarantine were to be buried here, regardless of the cause of death. At the onset of the epidemic, a rigid quarantine was enforced at the station and no one was allowed to leave or enter. The outbreak was contained and proved to be less severe than feared, however, with 43 documented cases. Twenty-two remains were interred here between July 30 and August 15, 1899. The men hailed mostly from New York and Pennsylvania, and included a blacksmith, carpenter, butcher and farmer.

More than half of VA's national cemeteries originated with the Civil War and many are closed to some burials. Other sites were established to serve World War veterans and they continue to expand. Historic themes related with NCA's cemeteries and soldiers' lots vary, but visitors should understand "Why is it here?" NCA began by installing interpretive signs, or waysides, at more than 100 properties to observe the Civil War Sesquicentennial (2011-2015). Please follow the links below to see the interpretive signs for Hampton VAMC National Cemetery.