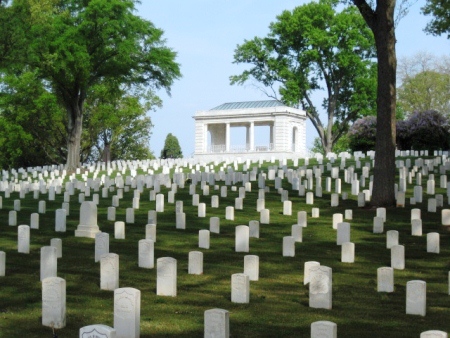 Marietta National Cemetery is closed to new interments. The only interments that are being accepted are subsequent interments for veterans or eligible family members in an existing gravesite. Periodically however, burial space may become available due to a canceled reservation or when a disinterment has been completed. When either of these two scenarios occurs, the gravesite is made available to another eligible veteran on a first-come, first-served basis. Since there is no way to know in advance when a gravesite may become available, please contact the cemetery at the time of need to inquire whether space is available.

The cemetery is located in downtown Marietta. From Hartsfield International Airport, take Interstate 75 North to North Marietta Parkway (Exit 265). Turn left at traffic light and proceed to Cole Street approximately one mile and turn left. Continue on Cole Street for four blocks. Cemetery is at the corner of Cole Street and Washington Avenue.

This cemetery is administered by Georgia National Cemetery located in Canton, GA.

Fresh cut flowers may be placed on a grave at any time, but are recommended during the spring and summer months. Metal flower containers are provided and are located at the cemetery entrance. The flower containers will be removed from the grave when the flowers become unsightly. During the mowing season all floral items will be removed on the 1st and 3rd Thursday of every month.

During the Christmas holiday season, Christmas wreaths, grave floral blankets and other such floral arrangements will be permitted commencing December and are allowed to remain on a grave through January 20 of each year. Grave floral blankets may not be larger in size than two by three feet.

Floral items and other types of decorations are not permitted to be secured to a headstone.

Permanent planting, statues, vigil lights, breakable objects of any kind, and similar commemorative items are not permitted on graves at any time. These and other hazardous objects will be removed and disposed of by cemetery personnel whenever found on a grave.

Permanent flower containers are only authorized in old burial sections. The Government is not responsible for the safeguarding, maintenance, replacement or return of the container.

Please consult the Director for clarification of any regulation, which is unclear.

During the Civil War, forces under the command of General William Tecumseh Sherman moved in and occupied the town. For the next five months, federal troops held the city under siege. In November 1864, troops commanded by Union General Hugh Kilpatrick set the town on fire before embarking on their infamous "March to the Sea."

Originally known as the "Marietta and Atlanta National Cemetery," the Marietta National Cemetery was established in 1866 to provide a suitable resting place for the nearly 10,000 Union dead from Sherman's Atlanta Campaign. Henry Cole, a local merchant who remained loyal to the Union throughout the war, offered land for a burial ground for both Union and Confederate dead. His hope was that by honoring those who had fallen together, others might learn to live in peace. Unfortunately, both sides clung to their bitterness and neither North nor South would accept Cole's offer toward reconciliation. When this effort failed, 24 acres were offered to General George H. Thomas for use of a national cemetery. In 1867 a second offer of land by Cole was accepted and a subsequent purchase of additional acreage in 1870 brought the cemetery to its present size of a little over 23 acres.

The cemetery site was, at one time, the proposed location of the capital of the Confederate States of America. The same Henry Cole who had attempted to donate his land for the national cemetery had refused an offer of $50,000 for the property because he "expected to put it to a better purpose." In recognition of Cole's gift, the government made express provision that a burial plat be set-aside for members of his family. Cole died April 18,1875, and was buried in what is now called the Cole Plot.

Daniel Webster Cole, son of the land donor, lived for many years in the family home across the street from the cemetery. A construction engineer, he drew the first map of the cemetery, which was later the basis for official layouts. The original sections of the cemetery were arranged in concentric circles around a flagstaff with paths radiating through the circles. The first interments were the remains of soldiers who had been buried where they fell. A granite memorial arch at the cemetery gate is inscribed: "Here rest the remains of 10,312 Officers and Soldiers who died in defense of the Union 1861–1865." Marietta National Cemetery was laid out by Union Army Chaplain Thomas B. Van Horne, who also laid out the Chattanooga National Cemetery. One of the national cemeteries constructed between 1861–1869, the design for Marietta National Cemetery was the most ornate and elaborate of its era.

Marietta National Cemetery was placed on the National Register of Historic Places on September 18, 1998.

Monuments and Memorials
Marietta National Cemetery is home to one of five monumental masonry archways that originally served as the formal entrance to national cemeteries found in the South. Three are managed by NCA: Marietta, GA, built 1883; Chattanooga, TN, built ca.1880; and Nashville, TN, built ca.1870. These Roman-inspired structures are approximately 35 feet high with Doric columns, a pair of ornamental iron gates, and inscriptions above. The two other memorial arches are found at Arlington National Cemetery, built 1879, and Vicksburg National Cemetery, ca. 1880, properties managed by the Department of Defense and National Park Service, respectively.

A marble obelisk monument dedicated in honor of 20th Army Corps comrades was erected in May 1870.

The Wisconsin Monument honors 405 sons of the "badger state" who died in the Battle of Atlanta during the Civil War and are buried nearby. The GAR conceived of the monument and the state legislature approved $5,000 to procure it. The shaft of Wisconsin pink granite inscribed with regimental information is topped, appropriately, by a three-dimensional life-size bronze badger. The Fitzhugh Lee Camp 4, Spanish-American War Veterans, hosted the Memorial Day dedication on May 31, 1926, which included a parade of aging former Union and Confederate soldiers.

Private Dennis B. Buckley (Civil War). He received the Medal of Honor posthumously for service in the U.S. Army, Company G, 136th New York Infantry, in recognition of actions at Peach Tree Creek, Georgia, July 20, 1864. He died that day and is buried in Section G, Site 6686.

Corporal Lee Hugh Phillips (Korea). He received the Medal of Honor while serving in the U.S. Marine Corps, Company E, 2nd Battalion, 7th Marines, 1st Marine Division, in recognition of great personal valor and risk of life above and beyond the call of duty in Korea, November 4, 1950. He was killed in action on November 27, 1950, during the Battle of Chosin Reservoir and is memorialized in Section MB, Site 8.

Other Burials
John Clark, who distinguished himself as a soldier and civil servant, fought in the Revolutionary War and rose to the rank of major general. He served in the House of Representatives 1801–1803, Georgia Senate 1803–1804.

More than half of VA's national cemeteries originated with the Civil War and many are closed to some burials. Other sites were established to serve World War veterans and they continue to expand. Historic themes related with NCA's cemeteries and soldiers' lots vary, but visitors should understand "Why is it here?" NCA began by installing interpretive signs, or waysides, at more than 100 properties to observe the Civil War Sesquicentennial (2011-2015). Please follow the links below to see the interpretive signs for Marietta National Cemetery.