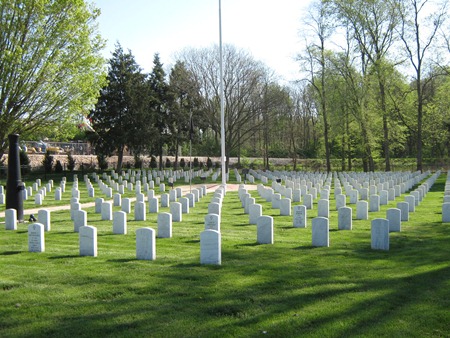 Quincy National Cemetery is closed to new interments. The only interments that are being accepted are subsequent interments for veterans or eligible family members in an existing gravesite. Periodically however, burial space may become available due to a canceled reservation or when a disinterment has been completed. When either of these two scenarios occurs, the gravesite is made available to another eligible veteran on a first-come, first-served basis. Since there is no way to know in advance when a gravesite may become available, please contact the cemetery at the time of need to inquire whether space is available.

The nearest commercial airport is the Quincy, Ill., Airport. From the airport, turn right onto Highway 104 to Quincy. Follow Highway 104 (Broadway Street) west to 36th Street. Turn left on 36th Street and travel south to Maine Street. Turn left on Maine Street and travel east 1/4 mile. The cemetery entrance is on the left side of the street. The cemetery is in Adams County.

Flowers and Containers: Fresh cut flowers may be placed on the gravesite at any time. Temporary flower containers are provided for your convenience and are the property of the cemetery. Please do not remove these containers from the cemetery grounds. Under no circumstances will items be tied, wired, glued, or otherwise attached to the headstone or marker. Permanent flower containers are no longer permitted.

Unauthorized Decorations: The following items are not permitted on the gravesite: Potted plants (except as above), statues, permanent plantings, vigil lights, breakable items (i.e., glass/ceramic vases), balloons, toys, stuffed animals, shepherd's hooks or similar devices, U. S. Flags (except on Memorial Day weekend), and other similar commemorative items or markers.

Perpetual Care: Guidelines provide for grounds maintenance, cutting the grass and trimming around the headstones/markers, and all areas of the Cemetery on a weekly basis. This includes the removal and disposal of unauthorized grave decorations and artificial arrangements (except during periods specified above). Fresh cut floral arrangements will be removed from the gravesite and disposed.

The Quincy National Cemetery originated as a Civil War-era soldiers’ lot within the Woodland Cemetery in Quincy, Illinois. Burials began as early as 1861, but title to the soldiers’ lot was not transferred until 1870 when the City of Quincy donated the quarter-acre parcel of land within Woodland Cemetery to the U.S. Government. In March 1873, 4 gun monuments and 64 shot pieces (cannonballs) were ordered to be placed as decorative objects at the soldiers’ lot. The gun monuments came from the New York Arsenal: the shot from the Allegheny Arsenal in Pennsylvania. In the spring of 1882, new government-issued marble headstones were erected at the graves of the 221 Union soldiers interred in the lot. The soldiers’ lot was elevated to the status of a national cemetery by virtue of Army General Orders No. 84 on July 24, 1882.

The first superintendent assigned to manage the new national cemetery in Quincy was Martin Easley, a disabled Civil War veteran who served with the 21st Regiment, Company K, of the Missouri Volunteers. Easley’s certificate of disability stated that he suffered from "partial paralysis of the upper extremities, the result of variola [smallpox] contracted in the service." Easley was strongly recommended to the Army by the John Wood chapter of the Grand Army of the Republic (GAR) and was appointed superintendent for Quincy National Cemetery on October 20, 1882. Easley’s strong GAR endorsement came at a high price, though, and he soon found himself at the center of a scandal. Based upon charges made against Easley, the War Department launched an investigation and found that Easley "had received the endorsement of the [GAR] post for his appointment upon the condition that he was to pay the Post fund the whole of his annual salary ($720), except $200.00." As a result, Easley’s appointment was cancelled on Jan. 30, 1883—barely three months after his appointment--and care for the cemetery was contracted out at a cost of $25.00 per year. On Dec. 12, 1887, the Honorable G.A. Anderson [U.S. House of Representatives] reported "that there is no necessity for a Superintendent at Quincy, Ills., nor at any other of the small cemeteries, similarly situated."

By 1890, the Quincy National Cemetery was described as a lot measuring 92 feet by 124 feet within Woodland Cemetery, "enclosed by a dressed limestone curbing on 3 sides and by a picket board fence and an osage orange hedge 5 feet 6 inches high on the fourth or north side. There were 243 interments with 217 headstones provided by the government, 13 provided by friends, and 13 recent interments with stones."

The first superintendent to oversee the soldiers’ lot at the new location in the Quincy Graceland Cemetery was T. Chester Poling. Poling was appointed as "authorized caretaker, or acting superintendent, of the Soldiers’ Lot, Quincy Graceland Cemetery, Quincy, Illinois, and his compensation for these services [was] fixed at the rate of $100, per annum, payable quarterly, effective July 1, 1924."

In 1936, the 0.45 acre soldiers’ lot was officially designated as Quincy National Cemetery and has remained a national cemetery since that time. According to a plat of the cemetery drawn in 1936, the site included three gun monuments, a flagpole, a flower urn, an ordnance tablet, and three "concrete monuments" on three corners of the lot. At an unknown later date, a fence was erected around the cemetery’s perimeter. The site never had a superintendent’s lodge or other outbuildings constructed on it.

During 1949, a survey of the cemetery was conducted and revealed that mistakes occurred in the erection of the perimeter fence. A portion of the government’s land was not fenced, while a portion of the Quincy Graceland’s property inadvertently was fenced. In 1953, it took an act of Congress, Public Law 116, to correct the boundaries to suitable satisfaction of both property owners.

Since the mid-20th century, modern changes including new roadways and residential developments were constructed which dissected various parcels of the Quincy Graceland Cemetery. The Quincy National Cemetery now appears as an independent and free-standing cemetery. The cemetery was listed on the National Register of Historic Places on May 7, 2011.

More than half of VA's national cemeteries originated with the Civil War and many are closed to some burials. Other sites were established to serve World War veterans and they continue to expand. Historic themes related with NCA's cemeteries and soldiers' lots vary, but visitors should understand "Why is it here?" NCA began by installing interpretive signs, or waysides, at more than 100 properties to observe the Civil War Sesquicentennial (2011-2015). Please follow the links below to see the interpretive signs for Quincy National Cemetery.