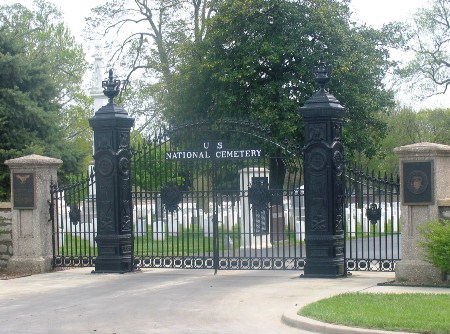 The cemetery is located on the south side of Springfield, one block north of Battlefield Mall. From the Municipal Airport, travel Kearney Street for six miles to Glenstone Avenue. Turn right (south) on Glenstone, proceed four miles to Seminole Street, turn right on Seminole. Travel one block to the cemetery entrance.

Grave Location
The grave location of your loved one is furnished on the map included in the burial document folder. There is a grave locator in front of the Maintenence Building adjacent to the visitor parking area to assist weekend visitors who may not know the location of the gravesite.

Grounds Maintenance
Immediately after each interment, the grave is filled and leveled. As soon as the headstone/marker is set, the site will be seeded. Until growing conditions are favorable and turf has been established, burial areas may be substandard in appearance. Because the soil continues to sink after a burial, a new grave requires repeated renovation. Matters that appear to need immediate corrective action should be brought to the attention of the Cemetery Director.

Fresh cut flowers may be placed on graves at any time. Metal temporary flower containers are permitted.

Artificial flowers may be placed on graves only during the period of Oct. 10 through April 15.

Christmas wreaths or blankets are permitted on graves during the Christmas season commencing Dec. 1 and will be removed after Jan. 20 each year. Grave floral blankets may not exceed two by three feet in size.

Floral items will be removed from graves as soon as they become withered, faded, or unsightly.

Statues, vigil lights, glass objects of any nature and any other type of commemorative items are not permitted on graves at any time.

Floral items and other types of decorations will not be secured to headstones or markers.

Permanent flower containers are not authorized for placement in new national cemeteries or in new sections of existing cemeteries.

All graves will be decorated with small flags by the national cemetery staff prior to Memorial Day. These flags will be removed immediately after Memorial Day and are not permitted on graves at any other time.

It is suggested that artificial arrangements be marked so that the donor can later identify them, if needed. Wind sometimes will move arrangements off of the gravesites and this will help our employees to relocate them.

Springfield National Cemetery is located on what was once the Kickapoo Prairie in Green County, Mo.

Settlers began arriving in southwest Missouri in 1822, making their way north up the James River and its tributaries. But it was only after removal of the Kickapoo and Delaware Indians in 1830 that permanent settlement became possible. John Polk Campbell is credited as the founder of Springfield. He arrived with his brother Madison in 1829, and upon finding a viable water supply carved his initials on an ash tree to establish his claim. Other settlers arrived almost daily and it was not long before a settlement developed, complete with stores, mills, a school and post office. By 1838 the town had been officially incorporated.

In 1861, Springfield was the site of the Missouri State Convention to determine its future as part of the Union. The governor favored secession. Delegates urged approval of the Crittendon Resolutions (then before Congress), which would have legalized slavery where it already existed, and would let new states decide their own rights and would reimburse slave owners for losses caused by abolitionist raids. Delegates ultimately decided against secession and opposed any military action by either side; but if the federal government declared war on the South, they would join the Confederate ranks.

The Battle of Wilson Creek, the first major Civil War engagement west of the Mississippi River, was fought in Springfield on Aug. 10, 1861, and involved about 5,400 Union troops and 12,000 Confederates. Although the battle was a Confederate victory, the South failed to capitalize on its success; it led to greater federal military activity in Missouri and set the stage for the Battle of Pea Ridge in March 1862.

Many men who died at the Battle of Wilson Creek would eventually be buried at Springfield National Cemetery, established in 1867 when the city purchased five acres for a burial plot. In 1911, the Confederate Cemetery Association (CCA) donated six acres, two of which were enclosed by a stone wall. Along with the land came the provision that burials would be restricted to men who died serving the Confederacy. Through a series of amendments to this provision in 1948, 1957 and 1984, all eligible veterans are now permitted in this portion of the cemetery. An 1871 cemetery inspection report recorded 832 known and 689 unknown interments in the cemetery. It continued, “A very worthless superintendent was in charge last year, and the cemetery was sadly neglected. This year it has been put in good order.”

Springfield National Cemetery was listed on the National Register of Historic Places in 1999.

Monuments and Memorials
The U.S. government erected a marble pillar in 1888 in memory of Brig. Gen. Nathaniel Lyon, a Union officer during the Civil War.

On Aug. 10, 1901, a monument in the form of a bronze figure was dedicated in honor of Missouri soldiers and Gen. Sterling Price, a Confederate officer during the Civil War. The sculptor was Chevalier Trentanove of Italy. The United Confederate Veterans of Missouri sponsored the monument.

The Union Memorial, also known as the T.J. Bailey monument, was erected in 1907. A lone infantry soldier stands atop its pedestal.

A small granite marker was dedicated Sept. 27, 1958, in honor of the unknown Confederate dead who fell in the Battle of Wilson’s Creek.

A small granite slab marks the location of a time capsule that was buried by the Lakes Counties 4H clubs during the Bicentennial in 1976. The time capsule will be opened on America’s tri-centennial.

The Battle of Wilson Creek Memorial is a bronze tablet mounted on the rostrum. The memorial commemorates 501 Confederate soldiers who died of wounds or sickness at the Battles of Wilson Creek and Springfield.

A granite and bronze monument erected in honor of Pearl Harbor survivors was dedicated on Aug. 8, 1992.

The Sons and Daughters of the American Revolution memorial is a granite monument dedicated in memory of patriots of the Continental Army or militia that gave their lives during the Revolutionary War. The memorial was installed in 1999.

Sergeant Harrison Collins (Civil War). He received the Medal of Honor while serving in the U.S. Army, Company A, 1st Tennessee Cavalry, for actions at Richland Creek, Tennessee, December 24, 1864. Collins died in 1890 and is buried in Section 26, Site 1357B.

Captain Patrick Pentzer (Civil War). He received the Medal of Honor while serving in the U.S. Army, Company C, 97th Illinois Infantry, for actions at Blakely, Alabama, April 9, 1865. Pentzer died in 1901 and is buried in Section 24, Site 1696.

Pharmacist’s Mate Third Class Jack Williams (World War II). He received the Medal of Honor posthumously for service in the U.S. Naval Reserves with the 3d Battalion, 28th Marines, 5th Marine Division, in recognition of self-sacrificing administration of first aid to others during the occupation of Iwo Jima, Volcano Islands, March 3, 1945. Williams is buried in Section 30, Site 2375.

Chief Pharmacist Fred H. McGuire (Philippines, 1911). He received the Medal of Honor while serving in the U.S. Navy, for actions while attached to the U.S.S. Pampanga on the island of Basilan, Philippine Islands, September 24, 1911. McGuire died in 1958 and is buried in Section 29, Site 332.

Other Burials
The following Buffalo Soldiers are buried at the cemetery:

Other notable burials in the cemetery include:

Born in New York on August 28, 1842, Malinda Pratt married Lucien Gibbs and had two children before he enlisted in the Army in July 1863. Gibbs served in the 147 New York Infantry, and died of disease in November. After his death, she filed for pension relief (1864) and served as a nurse at Emory Hospital in Washington, D.C. In November 1883, she married veteran soldier Wanton Moon, and they lived in Iowa before settling in Springfield, Missouri. Wanton Moon died in 1916; Malinda remained in Springfield until her death December 7, 1926. The McCroskey Woman's Relief Corps No. 22, auxiliary to the Grand Army of the Republic, arranged her funeral. Moon is buried at Springfield National Cemetery (Section 1, Site 1a).

More than half of VA's national cemeteries originated with the Civil War and many are closed to some burials. Other sites were established to serve World War veterans and they continue to expand. Historic themes related with NCA's cemeteries and soldiers' lots vary, but visitors should understand "Why is it here?" NCA began by installing interpretive signs, or waysides, at more than 100 properties to observe the Civil War Sesquicentennial (2011-2015). Please follow the links below to see the interpretive signs for Springfield National Cemetery.