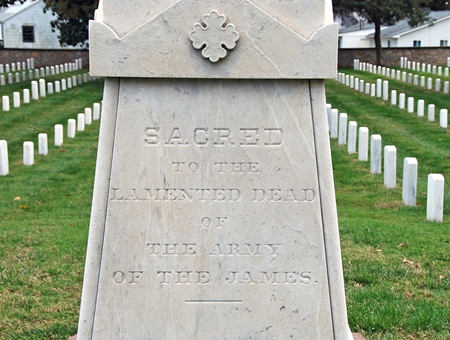 Detail of the Army of the James monument.

City Point National Cemetery is closed to new interments. The only interments that are being accepted are subsequent interments for veterans or eligible family members in an existing gravesite. Periodically however, burial space may become available due to a canceled reservation or when a disinterment has been completed. When either of these two scenarios occurs, the gravesite is made available to another eligible veteran on a first-come, first-served basis. Since there is no way to know in advance when a gravesite may become available, please contact the cemetery at the time of need to inquire whether space is available.

The Hampton National Cemetery manages this cemetery. You may contact the director at the number listed above.

City Point National Cemetery is located in the historical district of Hopewell, Virginia. The cemetery received its name from the town City Point which was in Prince George County before being annexed by the City of Hopewell in 1923. At the confluence of the James and Appomattox rivers, City Point was a vital transportation center for railroads such as the Norfolk and Petersburg Railroad, and was a well-established inland port on the James River and Kanawha Canal at the onset of the Civil War. City Point's transportation advantages and proximity to Richmond, the longest-enduring capital of the Confederacy, led Union General Ulysses S. Grant to establish a supply depot for his army here.

In the last year of the Civil War, Union troops, artillery and all manner of supplies were amassed at City Point in preparation for Grant's final assaults to capture Petersburg-another key communications center-and Richmond. From June 1864 until April 1865, the relentless Union advances and the Confederate's stubborn and often-desperate defense tactics resulted in many wounded and dead who were transported to City Point and other regional hospitals. Seven hospitals in City Point administered most of the care for the injured and mortally wounded.

Casualties were originally interred in burial grounds near the hospitals, and later they were reinterred at City Point National Cemetery. Through the years, additional burial sites from various Civil War battles have been discovered as local construction projects, such as subdivision development and road widening were made near the cemetery. Many of these remains-both Union and Confederate-were reinterred at City Point National Cemetery. Unlike other Civil War-era national cemeteries in the Richmond area, here the number of known interments exceeds unknowns. Reinterments include remains from another City Point burial ground, Point of Rocks cemetery (Chesterfield County), and Harrison's Landing (Charles City County). City Point National Cemetery was listed on the National Register of Historic Places in 1995.

According to an 1871 report, the superintendent's lodge at that time was a "small wooden cottage, in poor condition" and the cemetery lot was enclosed by a wooden picket fence. Sometime afterward, City Point became one of many early national cemeteries with sturdy Victorian superintendent lodges constructed according to a design by U.S. Quartermaster General Montgomery C. Meigs.

In 1922, four late-19th century buildings stood on the cemetery grounds: the superintendent's lodge; a four-room brick outbuilding that served as a wagon shed, coalhouse, stable, and workshop; a well house; and a public restroom. During 1928, the original Meigs lodge and all other structures were demolished. By December 1928, construction of a new Dutch Colonial style superintendent's lodge and service outbuilding had been completed. The cemetery is enclosed by a 19th century uncoursed fieldstone wall and wrought-iron gates. City Point National Cemetery was listed on the National Register of Historic Places in 1995.

Albany native Levi Kankapot, enlisted in the U.S. Army’s Second New York Heavy Artillery on March 3, 1862, during the Civil War. He was killed June 16, 1864, the second day of the siege of Petersburg, Virginia. Pvt. Kankapot was a member of the Mohican Nation’s Stockbridge tribe, and wrote about the tribe’s leadership and claim to 600 acres of ancestral land in New York. Pvt. Kankapot is buried in City Point National Cemetery, where he shares a headstone with E. L. Warren (Section C, Site 2099).