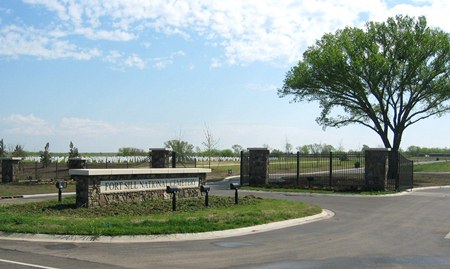 From Lawton Airport: Travel north on 11th Street to Lee Boulevard. Go east on Lee Boulevard to Interstate 44. Take Interstate 44 towards Oklahoma City. Take Exit 46 (last free exit) to Elgin. Follow the road approximately four miles straight across and over the train tracks, pass Doleses's Rock/Stone quarry and continue to Porter Hill at the four-way intersection (blinking light). Turn right on Highway 277 North (Meers/Porter Hill Road). Approximately two miles (at the top of the hill) turn right onto Jake Dunn Road and travel approximately one mile to the cemetery’s main entrance, which will be on the left.

Fort Sill National Cemetery has a Columbarium and offers families the option for cremated remains to be placed in-ground or in the columbarium.

The cemetery also has a designated Scattering Garden for scattering ashes with eligibility to place a memorial marker in the Memorial Section.

A Memorial Walkway in honor of America’s veterans is displayed with various memorial monuments donated by several organizations.

A Memorial Section is designated on cemetery grounds to honor veterans and their families whose remains have never been recovered, who were buried at sea, donated to science, or ashes scattered.

A Public Information Center (PIC) is available for visitors to obtain information from the volunteer staff, or to look up grave locations from an automated KIOSK. The KIOSK and instructions for operation are located outside the PIC, across from the public restrooms. The KIOSK generates a map with the name and grave location of the decedent. The PIC is the location where all funeral processions meet with their family, clergy, and cemetery representative before proceeding to the designated shelter for their service.

The cemetery is situated on land that was once Indian Territory. A military reservation was staked out in January 1869 by Maj. Gen. Philip H. Sheridan and was formally established as Camp Wichita the following month. Sheridan later renamed the garrison as Fort Sill in honor of fellow West Point classmate, Brigadier General Joshua W. Sill, who died in the Battle of Stones’ River during the Civil War. Fort Sill's mission was one of law enforcement for the expanding American frontier. The arrival of the Quohada Comanches to Fort Sill in June 1875 marked the end of Indian warfare of the south Plains.

In the 1890s, Apache Chief Geronimo and 341 other Apache prisoners of war were brought to Fort Sill by the government. Geronimo was granted permission to travel briefly with Pawnee Bill's Wild West Show and also visited with President Theodore Roosevelt. Geronimo died of pneumonia at Fort Sill on Feb. 17, 1909, at the age of 83 and is buried in the post cemetery at Fort Sill. Lt. Hugh L. Scott instructed the remaining Apache prisoners of war on how to build houses, raise crops and herd cattle. Many spent the remainder of their lives at Fort Sill.

The last Native American lands in Oklahoma opened for settlement in 1901 and 29,000 homesteaders registered at Fort Sill for the land lottery during July. On August 6 of that year, the town of Lawton sprang up and quickly grew to become the third-largest city in Oklahoma. As of 2005, Lawton currently is the fourth largest city in Oklahoma, having fallen behind Norman in the last census. With the disappearance of the frontier, the mission of Fort Sill gradually changed from cavalry to field artillery. The first artillery battery arrived at Fort Sill in 1902 and the last cavalry regiment departed in May 1907.

The School of Fire for the Field Artillery was founded at Fort Sill in 1911 and continues to operate today as the world-renowned U.S. Army Field Artillery School. In 2007, the Fort Bliss Air Defense was added to Fort Sill, they both operate under one umbrella called the Fires Center of Excellence. At various times, Fort Sill has also served as home to the Infantry School of Musketry, the School for Aerial Observers, the Air Service Flying School and the Army Aviation School. Today the U.S. Army Field Artillery Center at Fort Sill remains the only active Army installation to continuously serve the Southern Plains since the Indian Wars.

Evelyn B. (Urich) Einfeldt was born in Kansas in 1922. She graduated from high school early, but opportunities remained scarce in the Depression. Einfeldt stayed with relatives in Iowa and found a job in a defense plant. In eight months she was a line leader. She joined the Navy in 1943 and with other WAVES (Women Accepted for Volunteer Emergency Service) trained at Hunter College (NY) and Washington, D.C. WAVE Petty Officer Einfeldt worked in Dayton (OH) assembling the BOMBE, a machine used to decode German and Japanese transmissions used during World War II. By the end of the conflict, WAVES represented 2.5 percent of U.S. Navy personnel. The women were discharged in 1947 and the BOMBE project was classified until the end of the 20th century. In 1996, Einfeldt was recognized as Oklahoma's female veteran of the year. She died April 26, 2006 (Section 33, Site 73).

On April 28, 2006, Technical Sgt Alfred Wesley Hill's remains were laid to rest at the Fort Sill National Cemetery. TSgt Hill was missing in action for 62 years. He and eight crewmembers were onboard the B-24 bomber that disappeared after leaving Dobodura, New Guinea on an armed reconnaissance mission flying over Kavieng, New Ireland. He was last reported alive near Morobe Province, New Guinea on November 5, 1943. Remnants of all nine crewmen were found, identified, and returned to their families.