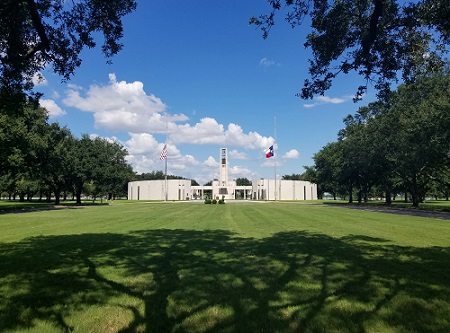 Cemetery is located 15 miles northwest of downtown Houston. From Bush Intercontinental Airport take John F. Kennedy Blvd. South to Beltway 8. Turn right onto Beltway 8 West and exit at Ella. Follow the feeder road West to the third traffic light, and turn left on Veterans Memorial Drive. Proceed to the first traffic light and turn left on T.C. Jester. The cemetery entrance will be on your right.

Military Funeral Honors
Military funeral honors for veterans and service members are provided by the Department of Defense at no cost to the family. The funeral director will contact the appropriate Military Service or an authorized provider such as a Veterans Service Organization to arrange for the funeral honors detail. Several Veterans Service Organizations have established ceremonial teams which regularly provide military funeral honors at Houston National Cemetery. Please contact your funeral director or call Houston National Cemetery for more information.

Artificial flowers may be placed on graves from December 15 through January 20.

Christmas wreaths or grave blankets are permitted on graves during the Christmas season and will be removed not later than January 20. Grave floral blankets may not be larger than two by three feet.

Dogs and pets are not allowed in the National Cemetery, unless they are licensed service dogs.

Picnicking, tailgating, exercise activities and loitering are not allowed in the national cemetery.

The Houston Veterans Administration Cemetery was dedicated Dec. 7, 1965. It was the only government cemetery constructed in the United States during the 1960s.

The present-day Houston National Cemetery was the largest of its kind at the time of construction. Designed entirely by VA staff, it was also the only new VA cemetery not located on the grounds of a VA hospital. Prior to Houston’s opening, the last VA cemetery established was at Eagle Point VA Medical Center, Ore., in 1952. The largest VA cemeteries at the time were in Los Angeles at 114.47 acres, and Leavenworth, Kan., at 113.15 acres. At 419.2 acres, the Houston facility was slightly smaller than the 450 acres or so of Arlington National Cemetery, to which it was compared.

Houston became a national cemetery in 1973 after the passage of the National Cemetery Act.

In 2017, the Houston National Cemetery was listed in the National Register of Historical Places.

Monuments and Memorials
The Hemicycle at Houston National Cemetery is its largest memorial and the most visible structure on the landscape. It is the only NCA-managed hemicycle memorial and is one of only three known hemicycles located in national cemeteries. The others are located at Arlington National Cemetery, Va., operated by the U.S. Army, and at Manila American Cemetery and Memorial in the Philippines, operated by the American Battle Monuments Commission.

At the keystone, or center, of the hemicycle are the chapel, carillon and speaker’s stand. David Parsons, a professor of art at Rice University, sculpted a 20' x 6' bas relief of three interlocking forms — a fallen soldier supported by two comrades. The sculpture, made of crushed quartz, was installed at the chapel entrance in 1965. The 75-foot tower, 305-bell, Schulmerich "Americana" carillon was dedicated May 30, 1970.

Sergeant Major Macario Garcia (World War II). Macario Garcia, native of Mexico, enlisted in the U.S. Army on November 11, 1942. He was a staff sergeant with Company B, 22nd Infantry Regiment, 4th Infantry Division, until October 8, 1945. On November 27, 1944, near Grosshau, Germany, a wounded Garcia single-handedly destroyed two enemy machinegun emplacements. He received the Medal of Honor on August 23, 1945. Garcia worked as a counselor with the Veterans Administration for twenty-five years, until his death on December 24, 1972. He is buried in Section HA, Site 1.

First Lieutenant Raymond L. Knight (World War II). He received the Medal of Honor posthumously for service in the U.S. Army Air Corps in recognition of actions in a series of missions in the Northern Po Valley, Italy, and self-sacrifice trying to fly his shattered aircraft to its home field. Knight crashed and was killed on April 25, 1945. His remains were reinterred on April 25, 1992, in Section H-B, Site 11.

First Sergeant David H. McNerney (Vietnam). He received the Medal of Honor while serving in the U.S. Army, Company A, 1st Battalion, 8th Infantry, 4th Infantry Division, for actions at Polei Doc, Republic of Vietnam, March 22, 1967. McNerney died in 2010 and is buried in Section H-A, Site 4.

Other Burials
The most renowned veteran buried in the cemetery is the late Honorable Albert Thomas, United States Congressman from Texas. Congressman Thomas served as a Lieutenant in the U.S. Army during World War I, and served almost 30 years in the U.S. House of Representatives. He was instrumental in getting this cemetery established by Congress. "Congressman Albert," as his many friends knew him, died in Washington, D.C., on Feb. 15, 1966, and was buried in the mall area of the Houston National Cemetery, on Feb. 18, 1966.

Hazel Juanita Shofner (1918-1966) was born in Texas and for most of her life made Houston home. She graduated from Northside High School in 1937 and joined the war effort in September 1943. She was the first woman from the city to enlist in the U.S. Navy reserve corps or WAVES (Women Accepted for Volunteer Emergency Service). Shofner served from 1943 to 1948 and attained the rank of chief yeoman. Her career began at Gulfport, Missisippi, in November 1943 and finished at the Naval Training Center, Great Lakes, Illinois. As a civilian, she returned to Houston and married Everett Murray Wilson, also a veteran of the U.S. Navy. They raised two children there and she worked for the police department in the data-processing bureau. Hazel Shofner Wilson died February 16 and was the first woman buried in Houston National Cemetery (Section C, Site 59).