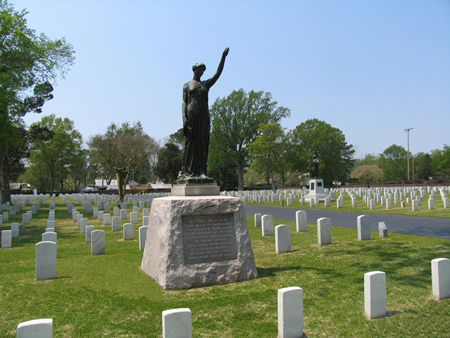 New Bern National Cemetery is closed to new interments. The only interments that are being accepted are subsequent interments for veterans or eligible family members in an existing gravesite. Periodically however, burial space may become available due to a canceled reservation or when a disinterment has been completed. When either of these two scenarios occurs, the gravesite is made available to another eligible veteran on a first-come, first-served basis. Since there is no way to know in advance when a gravesite may become available, please contact the cemetery at the time of need to inquire whether space is available.

Cemetery is located one mile northwest of Tryon Place and Broad Street. Travel west on Broad Street (U.S. 70 Business) then right onto George Street. Continue to National Avenue to the cemetery.

Some telephone numbers which may be helpful in obtaining military funeral honors are:

New Bern National Cemetery is located in New Bern, Craven County, N.C. Founded in 1710, New Bern is the second-oldest city in the state, founded by German and Swiss adventurers whose commander was from city of the same name in Switzerland. Prior to the American Revolution, Royal Gov. William Tryon made this seaport his colonial capitol and commissioned the construction of Tryon Palace in 1770.

Although there was some dissension within the state regarding secession, North Carolina chose to leave the Union on May 20, 1861. Ultimately, it supplied more men and materials to the Confederate cause than any other southern state. It also suffered the largest number of losses. New Bern was captured early in the war. By August 1861, the Union army had secured the Pamlico Sound inlets after defeating the Confederate forces and taking Forts Clark and Hatteras. By winter 1862, Gen. A.E. Burnside and Commodore L.M. Goldsborough had seized the Confederate positions on Roanoke Island and New Berne (as it was originally spelled). Union control of the inner coastal position tightened the blockade of the North Carolina coast, but the state held out until April 26, 1865, when Gen. Joseph Johnston surrendered the last major Confederate army to Gen. William T. Sherman near Durham, N.C.

New Bern National Cemetery was officially established Feb. 1, 1867. Many of the burials at New Bern are reinterments of remains from the surrounding area, including Beaufort, Hatteras and locations along the coast. Over 1,000 unknowns are buried in a separate section.

New Bern National Cemetery was listed on the National Register of Historic Places in 1997.

Monuments and Memorials
The granite New Jersey Monument was erected by that state in 1905. It is dedicated to the memory of the 9th New Jersey Regiment Volunteer Infantry.

The Massachusetts Monument is a granite memorial erected by the commonwealth in 1908 in memory of Massachusetts’s soldiers and sailors who died in North Carolina during the Civil War.

The Connecticut Monument was erected by that state in 1908. The memorial was dedicated to the memory of Connecticut men who died of yellow fever during the Civil War, as well as those who fell in action by 1865.

The Rhode Island Monument is composed of a granite base topped by a bronze figure. Dedicated Oct. 6, 1909, it was donated by the state of Rhode Island in honor of its volunteers who died in North Carolina during the Civil War. The monument was designed and sculpted by William W. Manatt of Providence, R.I.

More than half of VA's national cemeteries originated with the Civil War and many are closed to some burials. Other sites were established to serve World War veterans and they continue to expand. Historic themes related with NCA's cemeteries and soldiers' lots vary, but visitors should understand "Why is it here?" NCA began by installing interpretive signs, or waysides, at more than 100 properties to observe the Civil War Sesquicentennial (2011-2015). Please follow the links below to see the interpretive signs for New Bern National Cemetery.