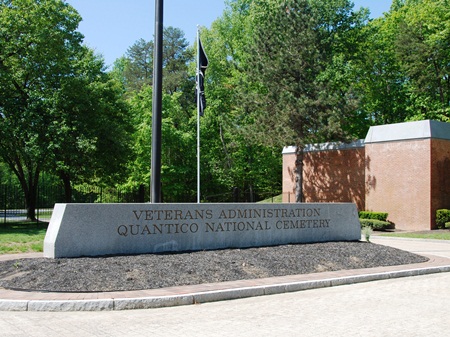 Other Burials
In 1945, Second Lieutenant Frederick Branch became the first African-American officer in the U.S. Marine Corps. Born in North Carolina, in 1922, he graduated from Temple University in 1947 with a degree in physics. Branch developed the science program for Philadelphia's Murrell Dobbins High School and taught for 35 years, but World War II interrupted his education. Branch fought in the South Pacific in 1943, followed by officer training. He served in Korea but resigned in 1955 due to limited opportunities for advancement. Captain Branch was recognized for his role in desegregation of the armed forces. The U.S. Senate passed a resolution honoring his landmark commission in 1995, he received an NAACP award, and a building at Quantico's Officer Candidate School is named for him. Branch died April 10, 2005, and is buried in Quantico National Cemetery (Section 17, Site 472).

Creadell J. Haley (1916–2000) was born in Oklahoma, where she and a brother were raised by an aunt and uncle. Haley graduated from Quincy High School in 1936 and enlisted in the Women's Army Air Corps (WAAC) in 1942. Her mechanical aptitude led to an opportunity to train as an aviation cadet. At the end of World War II, Haley was discharged at the rank of sergeant and continued her training as a pilot. She took her first solo flight in 1946. Sergeant Haley was the first woman, and only African-American, from Adams County, OK, to serve in the WAAC. This pioneer aviatrix became a Baha'i missionary to South America and composed hymns for her faith. She died November 2 in Washington, DC, and is buried in Quantico National Cemetery (Section 5, Site 258).

Jack Hawkins was born in Texas on October 25, 1916, and graduated from the Naval Academy in 1939. He was with the Fourth Marines in the Philippines in the opening phase of WWII and was taken prisoner by the Japanese during the Battle of Corregidor in May 1942. After eleven months of captivity he escaped and joined a guerrilla force, earning the Distinguished Service Cross. In the Korean War he led a Marine battalion during the Inchon Landing and at the Chosin Reservoir and earned a Silver Star. He was promoted to full colonel in 1955 and instructed amphibious landings at Quantico. His background led to his selection to train and plan the failed April 1961 Bay of Pigs Invasion for the CIA. He retired from active duty in 1965. He died May 17, 2013 and is interred in Section 22, Site 603.

General Lewis William Walt, assistant commandant of the Marine Corps from 1968–1971, had a career that spanned over 35 years and he served through three major wars. General Walt was awarded two Navy Crosses, one Silver Star, and two Purple Hearts. He was interred on May 11, 2000, in Section 17, Site 51 B.