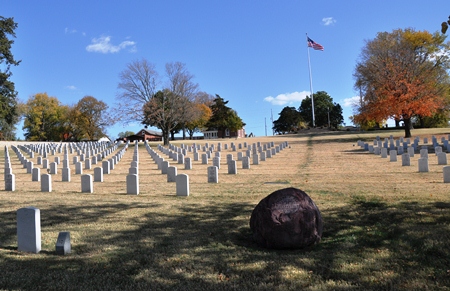 Military Funeral Honors
Additional or supplemental military funeral honors may include a funeral detail from members of the Veterans of Foreign Wars, American Legion or Disabled American Veterans. Also available is a Kansas National Guard unit stationed at Fort Scott and an ROTC unit from Nevada, Mo. Please contact the cemetery for further information.

Fort Scott National Cemetery is located on the eastern outskirts of the city of Fort Scott, Kansas. Fort Scott is located midway between Fort Leavenworth, Kansas, and Fort Gibson, Oklahoma, on the route historically known as the Military Road. The fort at Fort Scott was established in 1842 and named for Lieutenant General Winfield Scott, then, General-in-Chief of the U.S. Army. The fort’s primary purpose was to maintain a three-way peace among Native American tribes forcibly relocated from Florida and the East, local tribes, and incoming white settlers. Troops guarded caravans on the Santa Fe Trail and patrolled the vast frontier territory.

Roots of the American Civil War began with the Missouri Compromise in 1820 and, afterwards, in the new Kansas territory. In addition to wars and uprising with Native Americans in the waning Indian Territory, Fort Leavenworth served to protect citizens determined to settle in the Kansas territory. During the late 1840s and throughout the 1850s, Kansas was plagued by violent skirmishes between pro-slavery and "free state" proponents. Kansas became an official U.S. territory in May 1854 with the Kansas-Nebraska Act and as the dream of statehood was kindled, the fiery debate over whether Kansas would enter the Union as a "free" or "slave" state ignited more violence and bloodshed.

By 1853, boundaries of the American frontier extended farther west and the need for a military garrison at Fort Scott diminished. In 1855, the government abandoned the post, sold the lumber and auctioned off the buildings. In 1857 and 1858, the Army was ordered to quiet civilian unrest related to the violent struggles over Kansas’ future: was Kansas to enter the Union as either a free or a slave state? Kansas became the 34th state when it entered the Union on Jan. 29, 1861. Four months later, the official outbreak of the Civil War took place at Fort Sumter, South Carolina.

With the outbreak of the Civil War, Fort Scott was rebuilt and it once again became an important military post. The fort served as a concentration center for troops and a large storage facility for supplies intended for the use of Union soldiers fighting in the South. The 1st Kansas Colored Infantry, one of the Union Army’s African-American regiments, was assigned to Fort Scott in 1863. The unit took part in five engagements and suffered more casualties than any other Kansas regiment. For a short period after the Civil War, the Army continued to use the fort as a base to monitor and handle the movements of displaced Native Americans to the western territories. However, as new military posts were established farther west, Fort Scott was again abandoned in 1873--this time permanently.

During the 1840s, the Army established a cemetery on the west side of town to accommodate the burial of soldiers who died while stationed at the Fort Scott garrison. In 1861, town officers and citizens of Fort Scott purchased approximately four acres southeast of the old post for use as a community burying ground. Since the cemetery was controlled by the Presbyterian Church, it was known as the Presbyterian Graveyard. After the start of the Civil War, the new cemetery was used for the interment of soldiers stationed at Fort Scott. When Congress approved the creation of national cemeteries in 1862, the cemetery became one of 14 national cemeteries to be designated or established as such that year. On Nov. 15, 1862, the Presbyterian Graveyard and an adjoining tract owned by the Town Company were designated as Fort Scott National Cemetery.

After the war’s end in 1865, the remains of those buried in the old military cemetery, as well as other soldiers buried in the vicinity, in Missouri and Kansas, were re-interred at Fort Scott National Cemetery. Following the close of the Indian Wars and resettlement of Native Americans, the Army closed or consolidated many of its small military outposts in the West. As a result, between 1885 and 1907, the federal government vacated numerous military post cemeteries, such as Fort Lincoln, Kansas, and re-interred the remains at Fort Scott National Cemetery.

Eugene Fitch Ware, a noted Kansas poet, is buried in Grave 1 in the heart-shaped section of the cemetery. Ware was a Connecticut native who moved to Ft. Scott at the age of 26 in 1867 and spent the remainder of his life in Kansas. Ware served in the 7th Iowa Cavalry during the Civil War and was based at Ft. Scott. After the war, he entered the bar and practiced law at Ft. Scott and became active in Kansas politics. Ware achieved fame as a poet writing under the pseudonym, "Ironquill." He was a prolific poet and some of his most famous works include "The Washerwoman’s Song" and "John Brown." A large native sandstone boulder marks Ware’s grave. The natural beauty of this boulder impressed Ware and one of his final requests was that it be used as his grave marker. Also interred at Fort Scott National Cemetery are the remains of 16 Native American soldiers--all privates in the Indian Regiments of the Union Army who served as invaluable scouts.

Fort Scott National Cemetery was listed on the National Register of Historic Places in 1999.

Monuments and Memorials
A granite monument was erected in 1984 in memory of the 1st Kansas Colored Volunteer Infantry. The soldiers were stationed at Fort Scott during the Civil War.

The Veterans Memorial was dedicated in 1993.

A memorial in honor of combat infantrymen was erected by the Combat Infantrymen’s Association in 2003.

More than half of VA's national cemeteries originated with the Civil War and many are closed to some burials. Other sites were established to serve World War veterans and they continue to expand. Historic themes related with NCA's cemeteries and soldiers' lots vary, but visitors should understand "Why is it here?" NCA began by installing interpretive signs, or waysides, at more than 100 properties to observe the Civil War Sesquicentennial (2011-2015). Please follow the links below to see the interpretive signs for Fort Scott National Cemetery.