Welcome to the National Cemetery Administration! 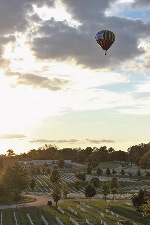 We are happy you are joining us in serving our Nation's Veterans! The National Cemetery Administration (NCA) is dedicated to honoring Veterans and their families with final resting places in national shrines and with lasting tributes that commemorate their service and sacrifice to our Nation.

You are joining an organization that has distinguished itself for its focus on Veterans and their families. In 2019 and for the seventh consecutive time, NCA was ranked first in customer satisfaction among the nation's top corporations and federal agencies in an independent survey conducted by the CFI Group using the methodology of the American Customer Satisfaction Index (ACSI). NCA's customer satisfaction index score of 97 (previous score was 96) was the highest ACSI score in either the private or public sector, reflecting high marks for the respectfulness of our staff and the trust that families have in us for the service and support we provide.

We are dedicated to supporting you in your professional journey as you begin your new position with NCA. This Welcome Portal will help you navigate through the onboarding process by following the steps outlined below.

The information that follows is for individuals who have already received a tentative offer of employment from the NCA HR Center.


Before You Report to Work

Your supervisor will contact you about a week before you start work to answer any questions you may have and ensure you have everything you need. If you don't hear from your supervisor by that time, please contact the NCA Human Resources Center (HRC) point of contact at the specific telephone number listed in your offer letter. The general HRC telephone number is (317) 916-3660.

Before you can start work, you must complete certain actions and the required employment forms as described below. Some of these forms can be completed on the USA Staffing Onboarding site. Other forms can be completed and printed from this Welcome Portal. If you have difficulty using these sites or you have any questions or concerns, please call the NCA Human Resources Center for assistance.

By now, you should have been fingerprinted and completed the forms that you were required to submit through the USA Staffing Onboarding site. If your job requires you to pass a pre-employment physical and a drug test, you should have successfully completed them. Once all of these requirements have been successfully completed, you will receive your final offer letter from the HR Center.

You now have your final offer letter and your starting date. It's time to prepare for your new job!

Your next steps are to: 1) apply for your PIV card, the photo ID card that allows you access to VA facilities and to your computer and 2) complete any remaining employment forms, as described below.

The PIV Card is the photo ID card that you will wear in order to gain access to Government facilities, and it is also used to access a government computer. Your supervisor will advise you of the nearest VA facility that can process your PIV card and the procedures you must follow.

VA Privacy and Information Security Awareness and Rules of Behavior

Please contact the HR Specialist listed in your offer letter, if you have questions about your security forms or about your employment forms. General contact information for NCA's Human Resource Center (HRC) is:


About the National Cemetery Administration

The Mission
NCA honors Veterans and their eligible family members with final resting places in national shrines and with lasting tributes that commemorate their service and sacrifice to our Nation.

Over 74% of NCA employees are Veterans. We consider the support we provide to Veterans and their families to be a sacred trust.

We work to publicize eligibility for burial benefits to Veterans and their families. Burial benefits include a gravesite in any VA national cemetery with available space, or a VA-funded state/tribal cemetery; the opening and closing of the grave; grave liner; government headstone or marker; perpetual care of the grave; a burial flag; and Presidential Memorial certificates at no cost to the family.

The history of the National Cemetery Administration dates back to the Civil War and grew out of President Abraham Lincoln's determination "to care for him who shall have borne the battle and for his widow, and his orphan." The history and development of National Cemeteries is described below. As our country has experienced additional wars and as the role of women has expanded in our military, today we remain determined to care for those who shall have borne the battle and their families and survivors.

The History and Development of National Cemeteries
The concept of a National Cemetery began in 1862 during the Civil War. The Army's long-established system for soldiers' burials was inadequate for the large-scale need of soldiers dying during that war. Military personnel were buried at the place of death, such as in a military post cemetery, or were transported to a private cemetery selected by the soldier's family. On September 11, 1861, the War Department directed that the Army's Quartermaster General be given responsibility for the burial of officers and enlisted soldiers. A register of all burials was to be kept and a wooden headboard placed at the head of each grave.

On July 17, 1862, Congress enacted legislation that authorized the President to purchase "cemetery grounds" to be used as national cemeteries "for soldiers who shall have died in the service of the country." Fourteen cemeteries were established that first year. By 1870, the remains of nearly 300,000 Union dead had been buried in 73 national cemeteries. Most of these cemeteries were located in the southeast, near the battlefields and campgrounds of the Civil War. After the war, Army crews scoured the countryside to locate the remains of soldiers who had died in battle. They were buried with honor in the new national cemeteries, which were enclosed by brick walls and entered by means of ornate gates. Tragically, however, the identities of nearly half of those who died in service to the Union and are buried in national cemeteries are unknown.

On February 22, 1867, Congress enacted the first National Cemetery Act. This was the first substantive legislation to provide funds and specific guidance for the national cemeteries. The Army appointed Superintendents to direct and oversee cemetery care. Congress passed several amendments to this law during the 1870s to accommodate the needs of aging Civil War Veterans. Forty-seven new National Cemeteries were added, many of them located beyond the sites of the Civil War battlefields. Improvements were made to existing properties that cemented their permanence in America's cultural landscape. Make-shift burial grounds created in the haste of war were supplanted by conscientious planning that created reverent national cemeteries. Durable marble headstones replaced the original wooden headboards.

In 1870, Quartermaster General Montgomery C. Meigs consulted with noted landscape architect, Frederick Law Olmsted, regarding the appearance of national cemeteries. Olmsted suggested that they be "studiously simple . . . the main object should be to establish permanent dignity and tranquility . . . a sacred grove - sacredness being expressed in the enclosing wall and in the perfect tranquility of the trees within." Perhaps as a result of Olmsted's recommendations, abundant and diverse trees, shrubs, and flower beds embellished the grounds of national cemeteries through the nineteenth century.

National cemeteries were supervised largely by Army Quartermaster staff until the 1870s when Congress authorized the hiring of Veterans to serve as national cemetery superintendents.

All honorably discharged Veterans became eligible for burial in national cemeteries in 1873.

The years from 1930 to 1950 marked the second significant period of change and expansion for the national cemetery system. The Army built seven new national cemeteries between the end of World War I and the beginning of World War II. Locations were based upon the first analysis of Veterans' demographic trends and were focused in and near urban centers. Construction was funded by the New Deal program and the work was supported by the Works Progress Administration (WPA). The Quartermaster Corps placed new importance on cemetery setting, landscape, and building design, following the trends of regionalized architecture on military bases.

In 1930, Congress established the Veterans Administration (VA). The VA assumed responsibility for the National Homes for Disabled Volunteer Soldiers (NHDVS) and cemeteries on those properties. The cemeteries were later designated as national cemeteries.

Although the eligibility for burial in a national cemetery was expanded, the Army adopted a "non-expansion" policy for the same properties and built no new national cemeteries after 1950.

In 1963, the VA broke ground on what would be its largest cemetery to date: the Houston Veterans' Cemetery in Texas. Eligibility criteria for burial there differed from the eligibility for burial in a national cemetery.

In January 1967, President Lyndon B. Johnson tasked the VA administrator to conduct a survey of all Veterans' programs, including national cemeteries managed by both the VA and the Army. On March 18, 1968, President Johnson and the Veteran Advisory Committee submitted their report to Congress. It contained recommendations 1) that the Army transfer its cemetery functions to VA; 2) that VA study methods for convenient burials; 3) the VA administrator establish uniform burial eligibility criteria. The result would be that most national cemeteries would be transferred out of the Army.

The 1973 Act mandated permanent establishment of an Advisor Committee on Cemeteries and Memorials, responsible for selection of cemetery sites, erection of memorials, and ensuring adequacy of burial benefits. This committee directed the VA administrator to conduct a study and develop criteria for operating a national cemetery network within the VA and to acquire land to meet the recommended the criteria as the network grew. The resulting study recommended expanding the network through construction of regional national cemeteries in each of the 10 Standard Federal Regions and creating a grant program to expand state Veterans' cemeteries.

The Veterans' Benefits Improvement and Health Care Authorization Act of 1986 required that the VA conduct a demographic study to identify geographic areas within the U.S. where the greatest burial needs for Veterans existed. The 1987 study identified the top ten areas. The National Cemetery System (NCS) continued to grow through land transfers and through new construction. The VA worked closely with the states to determine whether to align a state cemetery to the VA or from the VA to the state.

By 1994, the VA conducted another future burial needs assessment and updated its 1987 study. Demand was anticipated to be greatest to serve the aging Veterans of World War II and the Korean and Vietnam Wars. Additional cemeteries were constructed between 1992 and 2001.

The Veterans Programs Enhancement Act of 1998 was signed into law on November 11, 1998. It officially designated the National Cemetery System as the National Cemetery Administration (NCA) and elevated the position from director to the Under Secretary of Veterans Affairs for Memorial Affairs. It further extended eligibility for burial in a national cemetery.

The Veterans Millennium Health Care and Benefits Act, which became law on November 30, 1999, ordered the VA to undertake additional studies on future burial needs and mandated six new national cemeteries which were built from 2005 through 2007. On November 11, 2003, Congress authorized the establishment of six new national cemeteries through the National Cemetery Expansion Act of 2003, and they were opened in 2009 and 2010. The Veteran's Benefits Act of 2003, enacted on December 16, 2003, extended eligibility for burial benefits and permanently authorized the NCA's Cemetery Grants Program.

Seventeen new millennium-era national cemeteries were constructed in the period between 1997 and 2010, marking the fifth significant period of growth and development for America's national cemeteries and the largest expansion period, in total acreage, since the Civil War era. 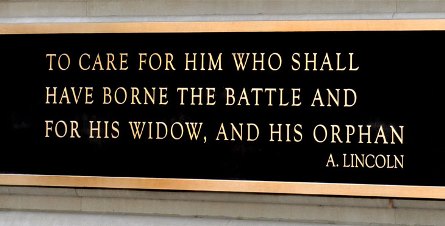