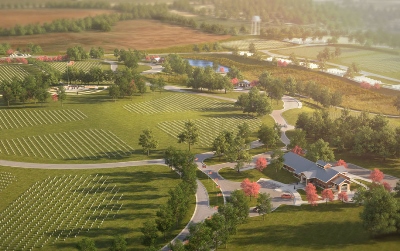 Every day of the year from sunrise to sunset.

If traveling from Iowa take Interstate 80 west to S 144th Street/ Hwy 50 and turn south. Continue 2.1 miles to Schram Road and turn left/east. The main entrance to the cemetery is 1/8 of a mile on the left from 144th Street/Hwy 50.

The 236-acre cemetery in Sarpy County, Nebraska will serve the burial needs of more than 112,000 Veterans in the cemetery's service area for the next 100 years. This cemetery is the second Department of Veterans Affairs (VA) national cemetery in the State of Nebraska.

Cemetery floral policies are conspicuously posted and readily visible to the public. Floral arrangements accompanying the casket or urn at the time of burial will be placed on the completed grave. Natural cut flowers maybe be placed on graves at any time of the year. They will be removed when they become unsightly. Metal, plastic and temporary flowers containers are permitted. Glass containers are not allowed.

Artificial flowers may be placed on graves during the period of October 10th through March 15th. Potted plants are permitted on graves 10 days before and 10 days following Easter Sunday. Memorial day decorations will be removed from graves 7 days following the holiday. Please note we do allow you to place artificial flowers during the Memorial Day week as an exception to the policy.

Christmas wreaths, and grave blankets are permitted on the graves during the Christmas season. They will be removed no later than January 10th of each year. Grave floral blankets may not be larger than 2'X3'.

Adornments that are considered offensive, inconsistent with the dignity of the cemetery or considered hazardous to cemetery personnel are not permitted.

Floral items and other decorations will not be secured to headstones or markers.

Cemetery personnel will remove floral items from the graves as soon as they become faded and unsightly.

The Department of Veterans Affairs purchased the property in 2012 for $6.2 million.

​​Missourian Melvin Carl Anderson was born in 1912 and by 1930 his family moved to Omaha, Nebraska. When the United States entered World War II, he enlisted in the army. In November 1944, Sergeant Anderson was part of Co. C, 803rd Tank Destroyer Battalion, supporting the fighting near Grosshau, Germany. Two tank destroyers and six tanks were destroyed, including Anderson's. On December 21, 1944, Anderson was categorized as killed in action and his name was inscribed on the Wall of the Missing, Netherlands American Cemetery. He was awarded a Bronze Star and Purple Heart with Oak Leaf Cluster, posthumously. U.S. investigators later found the remnants of a tank destroyer near Grosshau; it contained unknown remains that were interred at Rhone American Cemetery. New DNA technologies have allowed the Defense POW/MIS Accounting Agency to identify remains such as those of Anderson. He was reburied in Omaha National Cemetery on October 12, 2018.

Born in 1925, Jean Annette Briggs grew up in Bury St. Edmunds, Suffolk County, England. One of three girls, she was a talented artist who attended school in Cambridge. In 1943, at 18, she joined the Royal Navy and her family believed she drove a bus during World War II. Briggs actually operated a BOMBE machine, used to decode German military messages, and worked for master codebreaker Alan Turing. The secret ULTRA project cracked Germany's ENIGMA code. Briggs married U.S. Army Air Corps pilot John Watters (1917-2018) after the war. He flew B-17s, and later the U.S. Air Force colonel served in Korea and Vietnam. The couple raised six children in Bellevue, Nebraska. Jean Briggs Watters died September 15, 2018, and was buried with British military honors. She is interred with her husband in Omaha National Cemetery (Section 3, Site 253).

Wilfred Louis Ebel (1930-2018) was the fifth director of what is now the National Cemetery Administration, from 1987-1989. The Nebraskan served in the U.S. Army during the Korean and Vietnam conflicts. Ebel received military commendations including the Legion of Merit and Distinguished Service, and he was inducted into the Senior Army Reserve Commanders Association Hall of Fame in 1995. As a civilian, he held appointments in the Nixon, Ford, Reagan, and Bush administrations. The Memorial Affairs program at VA became the National Cemetery System during his tenure. Ebel oversaw the development of Florida and Fort Mitchell (AL) national cemeteries, transfer of a state veteran cemetery into the National Memorial Cemetery of Arizona, and the opening of three state cemeteries. He remained connected to NCA until his death. Ebel died July 3, 2018, and is buried in Omaha National Cemetery (Section 1, Site 854).