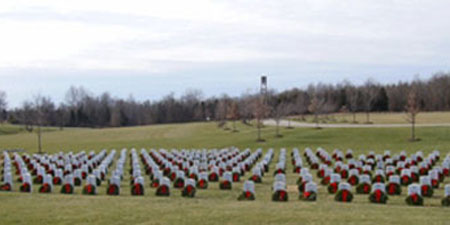 The U.S. Department of Veterans Affairs (VA) Veterans Cemetery Grants Program was established in 1978 to complement VA's national cemeteries. The program assists states, territories, and tribal governments in providing gravesites for Veterans in those areas where NCA cannot fully satisfy their burial needs.

Grants may be used only to establish, expand or improve Veterans cemeteries that are owned and operated by a state, territory or tribal government on trust land. Aid is granted only to states, U.S. territories and federally recognized tribal governments, not to private organizations, counties, cities or other government agencies.

VA can provide up to 100 percent of the development cost for an approved project. For establishment of new cemeteries, VA can provide for operating equipment as well. VA cannot pay for acquisition of land.

Cemeteries funded under the grant program must conform to the standards and guidelines pertaining to site selection, planning and construction prescribed by VA.

Cemeteries must be operated solely for the interment of service members who die on active duty, Veterans (as defined by federal law), and their eligible spouses and dependent children.

States, territories or tribal governments may impose residency requirements and other limitations to eligibility in addition to those imposed by federal law. State eligibility requirements, however, may not be less stringent than Federal requirements.

The administration, operation, and maintenance of a VA-supported state cemetery is solely the responsibility of the state, territory or tribal government.

VA is authorized to reimburse states "plot allowance" of up to $807.00 for expenses incurred in the burial of certain eligible Veteran.