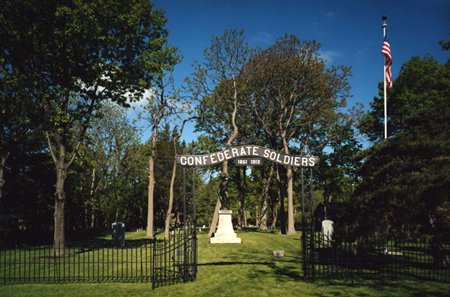 The Confederate Stockade Cemetery in Ohio.

This cemetery is overseen by Ohio Western Reserve National Cemetery.

Confederate Stockade Cemetery is located on Johnson's Island in Sandusky Bay, Ohio, approximately four miles from the city of Sandusky. The rectangular plot is enclosed with an iron fence, highlighted by an iron archway at the entrance closest to the water's edge.

From the early summer of 1862 until the end of the Civil War, Johnson's Island served as the primary stockade for Confederate Officers. Separating captured officers from enlisted men was based upon the view that officers were gentlemen, worthy of more humane conditions, and to prevent officers from organizing enlisted men to escape or to create disturbances.

The Confederacy continued to lose officers as the war progressed, contributing to the importance the officers imprisoned in the Confederate Stockade. In 1864, Confederate agents in Canada planned to liberate the prisoners on Johnson's Island by hijacking the U.S.S. Michigan from Sandusky Bay, and using the gunboat to overwhelm the prison guards. The plan was thwarted when word of the scheme was leaked to Union authorities. Afterward, federal forces constructed two additional fortifications on the island, Fort Hill and Fort Johnson, in case of another attempt. In addition, all generals and field-grade officers held at Johnson's Island were transferred to eastern prisons.

In the initial years following the Civil War, the federal government did not administer Confederate cemeteries. This policy changed in 1878, when Congress appropriated $1,500 for “care and protection of the Confederate cemetery on Johnson's Island, Ohio…provided that before any expenditure is made, the title of the land upon which the cemetery is located shall be transferred to the United States.” This marked the first time that the federal government appropriated funds to maintain a Confederate cemetery. Despite this act, the owner of the island, Mr. L.B. Johnson, refused to sell the land. In 1904, the United Daughters of the Confederacy purchased the cemetery from Mr. Johnson, eventually donating it to the U.S. government in 1931.

Monuments and Memorials
There are four memorials at Confederate Stockade Cemetery.

On June 8, 1910, the United Daughters of the Confederacy erected a statue, approximately 19' tall, to commemorate the Confederate dead. Sculpted by Moses Ezekiel, a graduate of the Virginia Military Institute and a Confederate veteran, the bronze figure titled “The Lookout” stands atop a granite base.

Installed in 1925, the granite and bronze Mack-Hauck memorial commemorates Alice Davenport Mack and Elizabeth Morrison Houck, two members of the United Daughters of the Confederacy who contributed to the preservation of the Confederate cemetery at Johnson's Island.

Also installed in 1925, the granite and bronze Mary Patton Hudson memorial commemorates the woman who spearheaded the effort of the United Daughters of the Confederacy to purchase Johnson's Island.

In 2003, the United Daughters of the Confederacy installed a pair of granite memorials commemorating Confederate POWs in a rededication ceremony. The memorials document the use of ground penetrating radar, through which a total of 267 individual remains were discovered in the cemetery.

More than half of VA's national cemeteries originated with the Civil War and many are closed to some burials. Other sites were established to serve World War veterans and they continue to expand. Historic themes related with NCA's cemeteries and soldiers' lots vary, but visitors should understand "Why is it here?" NCA began by installing interpretive signs, or waysides, at more than 100 properties to observe the Civil War Sesquicentennial (2011-2015). Please follow the links below to see the interpretive signs for Confederate Stockade Cemetery.