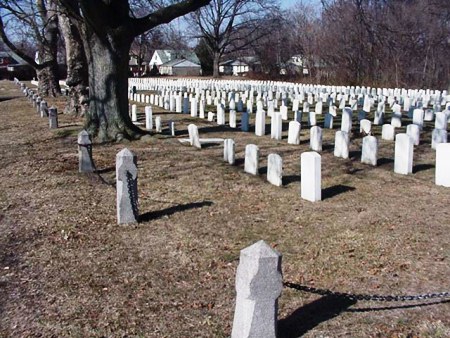 This government lot is closed to interments.

This soldiers' lot is overseen by the Washington Crossing National Cemetery.

Our cemetery floral and grounds policies exist only to reflect the honor and respect we hold for our Nation's Veterans, by preserving the dignity and solemnity of their final resting place.

Artificial flowers will be permitted from November 1 – April 1.

No permanent floral vases are permitted.

Potted plants will be permitted on graves one week before and one week after Easter Sunday and Memorial Day.

Holiday wreaths and grave blankets are permitted on graves from December 1 through January 10 and will be removed after January 20 of each year. Grave blankets shall be no larger than 2 x 3 feet.

The Department of Veterans Affairs does not permit adornments which might be considered offensive, inconsistent with the dignity of the cemetery, or considered hazardous to cemetery personnel. For example, items incorporating beads or wires which may become entangled in mowers or other equipment and cause injury. Unauthorized items will be removed immediately. Floral arrangements and other decorations may not be secured to the headstone.

Mount Moriah Cemetery was established by the Pennsylvania Legislature in 1855, one of several rural cemeteries developed in Philadelphia between 1845 and 1860. Located on the southwestern edge of the city, the private cemetery originally consisted of 54 acres. Over time it has grown to 380 acres spanning both sides of Cobbs Creek. Due to the massive size of the cemetery, many churches and other organizations have established smaller lots within its bounds. A majestic gatehouse provides entrance into to the cemetery. Designed by local architect Stephen D. Button in 1855, the Romanesque gatehouse is fabricated from brownstone.

Notable headstones in the cemetery include a granite marker constructed in the shape of the Civil War iron-clad ship, the USS Monitor. The headstone memorializes William Rowland, a sailor on the USS Minnesota, which was protected by the Monitor from the CSS Virginia (formerly the USS Merrimack) at the Battle of Hampton Roads.

For a time Mount Moriah Cemetery held the remains of Betsy Ross, reputed maker of the American flag. However, leading up to the local celebration of the 1976 Bicentennial, her remains were moved to Arch Street near the Betsy Ross house.

In the early 1870's, an African-American named Henry Jones purchased a lot in the cemetery. After his death, cemetery authorities turned away his funeral procession at the gate, on the basis of his race. A lawsuit was filed against the Mount Moriah Cemetery association on his behalf, and in 1876 the Supreme Court ruled in favor of Jones' right to burial in the cemetery.

Mount Moriah Naval Plot is associated with the U.S. Naval Asylum. The Naval Hospitals Act of 1811, passed through Congress with the help of Secretary of the Navy Paul Hamilton, established the U.S. Naval Asylum in Philadelphia. Architect William Strickland designed the main building, which was completed in 1833. Originally used as a naval hospital, in 1838 midshipmen began taking classes at the asylum.

With the 1845 opening of the Naval Academy in Annapolis, the asylum ceased serving as a school. In 1864 the federal government purchased a 10-acre site in Mount Moriah Cemetery for the re-interment of remains within the plot on the grounds of the Naval Asylum. More than 2,400 navy officers and sailors have been buried in Mount Moriah Naval Plot since the first interment on March 26, 1865. This lot is bordered by a low fence of chain-and-bollards, and contains many very old, non-standard headstones, as well as a naval anchor on a concrete base.

The National Cemetery Administration has jurisdiction over this section of the cemetery as well as the Soldiers' Lot.

Fireman John Laverty (Civil War). He received the Medal of Honor twice while serving in the U.S. Navy: first on board the U.S.S. Wyalusing for participation in a plan to destroy the ram Albemarle in the Roanoke River, May 24, 1864, and second for actions on board the U.S.S. Alaska following a rupture of the vessel’s stop-valve chamber, Callao Bay, Peru, September 14, 1881. Laverty’s service during the Civil War, and first Medal of Honor commendation, was under the name Lafferty. He died in 1903 and is buried in Section 3, Row 3, Site 17.

Other Burials
Jesse Duncan Elliott, a naval officer during the War of 1812, is buried in Mount Moriah Naval Plot. During the Battle of Lake Erie on September 10, 1813, Elliott served as the second in command to Captain Oliver Perry. When the British severely damaged the flagship of the Lake Erie fleet, the USS Lawrence, Elliott helped Perry transfer command to the USS Niagara. Elliott subsequently took command of the remaining ships in the fleet, and helped lead the Americans to victory in the battle. After the war, Elliott remained in the Navy until his death on December 10, 1845, at the Philadelphia Naval Yard.

Commodore Peter Turner is also interred in the naval plot. Turner served as the commander of the U.S. Naval Asylum in Philadelphia from 1863 to 1868, was commissioned as a Commodore in 1867, and died in 1871.