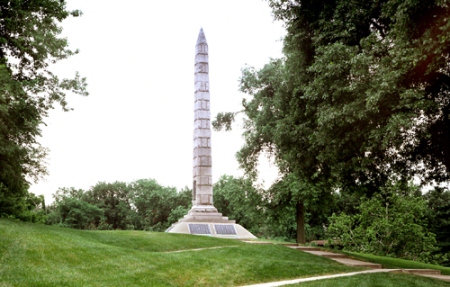 This cemetery is overseen by Jefferson Barracks National Cemetery.

Fresh cut flowers may be placed on graves at any time. Metal temporary flower containers are permitted.

Artificial flowers may be placed on graves only during the period of Oct. 10 through April 15.

Christmas wreaths or blankets are permitted on graves during the Christmas season commencing Dec. 1 and will be removed after Jan. 20 each year. Grave floral blankets may not exceed two by three feet in size.

Floral items will be removed from graves as soon as they become withered, faded, or unsightly.

During the lawn mowing and ground maintenance season all floral items will be removed from graves when unsightly.

Statues, vigil lights, glass objects of any nature and any other type of commemorative items are not permitted on graves at any time.

Floral items and other types of decorations will not be secured to headstones or markers.

Permanent flower containers are not authorized for placement in new national cemeteries or in new sections of existing cemeteries.

The national cemetery will decorate all graves prior to Memorial Day with small flags. These flags will be removed immediately after Memorial Day and are not permitted on graves at any other time.

It is suggested that artificial arrangements be marked so the donor can later identify, if needed. Wind sometimes will move arrangements off of the gravesites and this will help our employees to relocate them.

The prison building in Alton, Illinois, was constructed in 1833 to serve as the Illinois State Prison. Located in a low area close to the Mississippi River, the State of Illinois abandoned the prison in 1860 at the urging of social reformer Dorthea Dix, who complained about the unhealthy conditions there.

Soon after the outbreak of the Civil War, the federal government re-opened the facility as a Confederate prison. The maximum capacity of Alton prison was estimated at 800; in the last year of the war it held close to 1,900 Confederate prisoners.

As in many Confederate prisons, the inmate population was ravaged by disease, and over the course of the war smallpox claimed the lives of hundreds of prisoners. In an attempt to minimize the number of smallpox deaths, prison officials quarantined those stricken with the disease in a hospital on Tow Head Island, in the Mississippi River. Prisoners who died of smallpox were buried on the island itself. In the years after the Civil War, frequent flooding of the river eroded all of the grave markers. Today, the location of the smallpox hospital and the burials is unknown.

Confederates who died from causes other than smallpox were interred two miles north of Alton, in an area known as “Buck Inn.” This became the official prison burial ground, and today is the location of the North Alton Confederate Cemetery.

Monuments and Memorials
A Confederate monument erected by the United Daughters of the Confederacy in 1909 marks the collective graves of the soldiers. The names of 1,354 Confederate soldiers who died in the prison or on Tow Head Island are inscribed on six bronze plaques attached to the 58' high granite obelisk.

More than half of VA's national cemeteries originated with the Civil War and many are closed to some burials. Other sites were established to serve World War veterans and they continue to expand. Historic themes related with NCA's cemeteries and soldiers' lots vary, but visitors should understand "Why is it here?" NCA began by installing interpretive signs, or waysides, at more than 100 properties to observe the Civil War Sesquicentennial (2011-2015). Please follow the links below to see the interpretive signs for North Alton Confederate Cemetery.