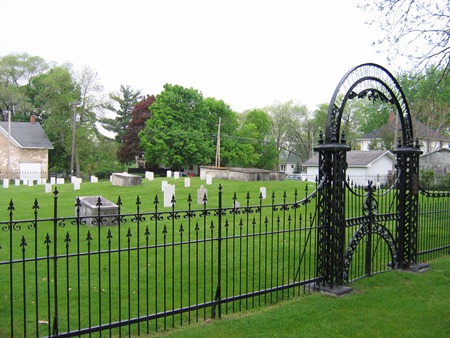 From the South: Take US-18 East then turn right on South Beaumont Road and the cemetery is on the left.

From the East: Take US-18 East then turn right on South Beaumont Road and the cemetery is on the left.

There is no office at this cemetery. It is overseen by Wood National Cemetery.

In the spring and summer of 1832, Black Hawk, leader of a band of Sauk and Fox Indians, clashed with U.S. forces in northern Illinois and southern Wisconsin, in a conflict now known as the Black Hawk War. After the Battle of Bad Axe in 1832, Black Hawk surrendered to the forces of Colonel Zachary Taylor and was imprisoned at Fort Crawford.

The soldiers' lot is located in block 13 of the Fort Crawford Cemetery. The first burials here were of the members of the 1st and 5th Infantry regiments stationed at the fort. The soldiers' lot includes eight above-ground box-tombs that were likely erected by the regiments. The United States received the title for the lot in 1866. There are approximately 64 interments in the 0.59-acre soldiers' lot, including the remains of four soldiers removed from the Protestant cemetery at Prairie du Chien.

Monuments and Memorials
The United Daughters of the Confederacy dedicated a bronze plaque to Jefferson Davis in August 1953 near the street entrance to the soldiers' lot. Lt. Jefferson Davis served briefly at Fort Crawford as a young man; later he became the president of the Confederate States of America. Fort Crawford is one of at least four sites that claim to be the setting of Davis' elopement with the daughter of Zachary Taylor.