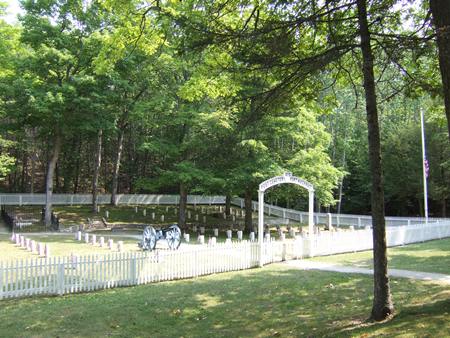 Directions from Bishop International Airport (Flint, MI): Go East on W Bristol Rd toward Torrey Rd; take the I-75 N / US 23 N ramp toward Saginaw. Stay on I-75 / US 23 N to mackinaw City, MI. In Mackinaw City take the ferry landing exit. Take the ferry (fee charged) to Mackinac Island. Cemetery is located behind the fort.

There is no office at this cemetery. It is overseen by Great Lakes National Cemetery.

Floral arrangements are not authorized at any time in the cemetery.

Located in the Straights of Mackinac, which connect Lake Michigan and Lake Huron, Mackinac Island played a significant role in early American history due to its strategic location. Control of the island changed hands numerous times leading up to and after the establishment of the American republic. The French first occupied Mackinac Island in the 17th century, surrendering it to the British after the French and Indian War. The British fortified the island toward the end of the Revolutionary War, yielding it to the United States in 1796. British forces recaptured the fort at the outbreak of the War of 1812, only to relinquish control to the Americans again at the cessation of the war.

In 1875, in response to the increasing popularity of Mackinac Island as a tourist destination, the federal government established Mackinac Island National Park. It was the second national park established in the United States, after Yellowstone National Park. With the close of Fort Mackinac in 1895, military operations on the island came to a halt, and the federal government ceded the park to the state of Michigan.

Throughout most of the 20th century, the state maintained the grounds, save for a period in the late 1930's, when the Civilian Conservation Corps, a New Deal work-relief program, landscaped and improved the cemetery. In 1990, the Department of Veterans Affairs assumed responsibility for the maintenance of the cemetery through an agreement with the state.

Today, the rectangular post cemetery is bounded by a white picket fence with a wooden archway marking the entrance. Of the approximately 108 burials in Fort Mackinac Post Cemetery, 69 are unknown. In addition to the soldiers and their families, six civilians are interred at the post cemetery.

Mackinac Island, Michigan, including Fort Mackinac Post Cemetery, was designated as a National Historic Landmark in 1960.