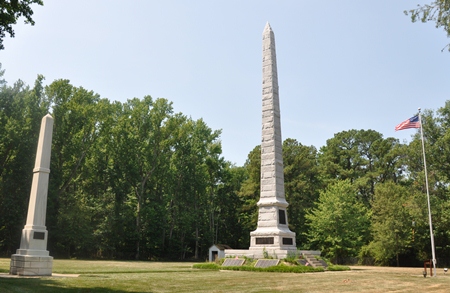 From Baltimore National Cemetery take 695 South to 97 South. Follow 97 South to 665 Riva Road. Follow 665 Riva Road to Route 2 South toward Solomons Island to Route 2-4 South. At Route 5 South make a left and travel approximately 20 miles and cemetery will be on the right.

This cemetery is overseen by Baltimore National Cemetery.

The placement of floral items is subject to the following conditions:

1. Fresh cut flowers may be placed at the monument at any time.

2. Floral items will be removed as soon as they become faded or unsightly.

3. Artificial flowers may be placed at the monument only during the period of October 10 through April 15.

4. Plantings are not permitted at any time. Potted plants will be permitted only during the period 10 days before and 10 days after Easter Sunday and Memorial Day.

5. Christmas wreaths are permitted on graves during the Christmas season and will be removed not later than January 20th of each year. Contact the cemetery staff for the exact date of the post-holiday cleanup.

6. During the lawn mowing and ground maintenance season (April – November), all floral items will be removed on the 2nd and 4th Friday of the month.

7. Balloons, statues, vigil lights (solar or battery powered), breakable (glass) objects of any nature, spinners, and similar/other commemorative items are not permitted at any time.

8. Floral items and other types of decorations will not be secured to or placed on the monuments.

Point Lookout Confederate Cemetery is located in Ridge, Maryland, approximately 80 miles south of Washington, D.C., at the mouth of the Potomac River. During the Civil War, the Union Army established a hospital on the site after General George McClellan's Peninsula Campaign failed to capture Richmond. Following the Battle of Gettysburg, the Union desperately needed a repository for Confederate soldiers in the region; as a consequence Point Lookout was transformed into a prison.

As in many Union prisons, the inmate population at Point Lookout ballooned as the war progressed. Between 1863 and 1865, more than 50,000 prisoners passed through the gates of Point Lookout. Many prisoners briefly stayed in Point Lookout before transferring to other prisons farther north. At various points over this period, the total population of Point Lookout reached 20,000 or more, double the intended capacity. Approximately 4,000 Confederates died at the site. Many of the inmates lived in tents instead of barracks, which contributed to the large number of deaths by exposure.

Confederate remains at Point Lookout are interred in a common grave. Originally, the soldiers were buried in two cemeteries near the prison camp. However, in 1870 the state of Maryland removed the remains to a more favorable site one-mile inland. After the transfer, the individual graves could not be identified; as a result the remains were buried in a common grave. In 1910, Maryland asked the federal government to assume care of the burial site and, toward that end, passed an act relinquishing all right, title, and interest in the cemetery.

Monuments and Memorials
In 1910, when the federal government began maintenance of this property, an 80' tall granite obelisk was erected marking the common grave. The monument includes 12 bronze tablets inscribed with the names and command of 3,382 known Confederate soldiers and sailors, and 44 civilians. Four of these tablets are attached to the base of the monument, and eight are on the grass mound supporting the monument. The Van Amridge Granite Company created the monument.

More than half of VA's national cemeteries originated with the Civil War and many are closed to some burials. Other sites were established to serve World War veterans and they continue to expand. Historic themes related with NCA's cemeteries and soldiers' lots vary, but visitors should understand "Why is it here?" NCA began by installing interpretive signs, or waysides, at more than 100 properties to observe the Civil War Sesquicentennial (2011-2015). Please follow the links below to see the interpretive signs for Point Lookout Confederate Cemetery.