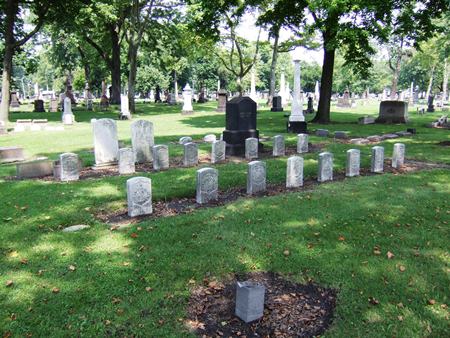 From the South (Columbus, Akron): Take Interstate 71 North towards Cleveland, Ohio. Merge onto Interstate 490 East via exit 247a. Turn left on East 55th Street for ½ mile. Turn right onto Woodland Avenue for ½ mile to cemetery.

The soldiers' lot is located in Section 10 and Section 14.

Woodland Cemetery is located in Cleveland, Ohio, on the east side of the Cuyahoga River. Founded in 1853, Woodland was one of many rural cemeteries built throughout the United States as part of the rural cemetery movement of the mid-19th century. The name “Woodland” came from an imaginative description of the city by Thomas Campbell, a Scottish poet who never visited Cleveland. The cemetery was laid out by Howard Daniels, a notable New York landscape architect who also designed Spring Hill Cemetery in Cincinnati and Druid Hill Park in Baltimore. For many years after its inception, Woodland served as Cleveland's largest public cemetery, as well as open space for a city lacking in parks. Streetcars ran regularly to Woodland Cemetery, which served as the final resting place for many prominent local citizens. Today the cemetery retains most of its original 60 acres and it is owned by the City of Cleveland.

Woodland Cemetery Soldiers' Lot is comprised of two separate parcels that the federal government purchased in 1868 for the Civil War dead. Section 14, lot 48, contains 16 graves in an area measuring 28 feet by 23 feet. Section 10, lots 59 and 60, contain 32 graves in an area 40 feet by 16 feet. The first interments were the remains of 27 Union soldiers removed from West Side Cemetery, Cleveland. There is an unrelated group of Civil War-era burials around the cemetery's central flagpole, but these are not administered by NCA.

Woodland Cemetery, including the soldiers' lot, was listed on the National Register of Historic Places in June 1986.

More than half of VA's national cemeteries originated with the Civil War and many are closed to some burials. Other sites were established to serve World War veterans and they continue to expand. Historic themes related with NCA's cemeteries and soldiers' lots vary, but visitors should understand "Why is it here?" NCA began by installing interpretive signs, or waysides, at more than 100 properties to observe the Civil War Sesquicentennial (2011-2015). Please follow the links below to see the interpretive signs for Woodland Soldiers' Lot.