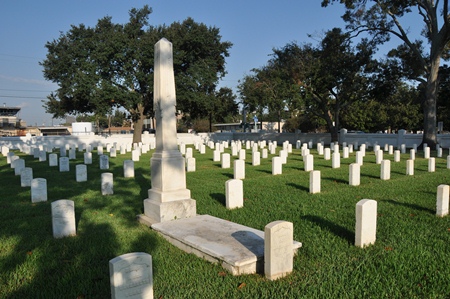 This cemetery is closed to new interments. However, space may be available in the same gravesite for eligible family members.

Baton Rouge National Cemetery is located in East Baton Rouge Parish within the city limits of Baton Rouge, La. Baton Rouge has been under the authority of seven different nations since its founding: France, England, Spain, West Florida Republic, Louisiana, Confederate States of America and the United States of America. French explorers discovered the area in the late 17th century. The local Native Americans referred to it as Istrouma or Red Stick, which translated into French is Baton Rouge. Explorers’ records describe large, reddened poles erected with fish and bear heads attached in sacrifice by local tribes, which may have designated boundaries between tribal hunting grounds.

In 1718, the French are alleged to have constructed a fort near here to protect travelers bound from New Orleans to northern outposts. In 1763, this area was transferred to England according to the Treaty of Paris and it was renamed New Richmond. A little more than 30 years later, in September 1779, the Spanish defeated the English at Fort Butte on Bayou Manchac and captured Baton Rouge. The territory remained under Spanish control until 1810 when approximately 1,000 local settlers declared themselves the independent West Florida Republic and overthrew Spanish colonial rule. On April 8, 1812, Louisiana was admitted into the Union, and five years later the city of Baton Rouge was incorporated.

Louisiana seceded from the Union in 1861 and became an independent republic for six weeks before joining the Confederacy. Union forces captured New Orleans in May 1862 without a battle, and subsequently, Union troops moved upriver to Baton Rouge. The Battle of Baton Rouge took place Aug. 5, 1862. After a brief skirmish, Union troops overwhelmed the small Confederate force and Baton Rouge remained under Union control for the duration of the war.

During the Civil War, soldiers and sailors were buried at the present site of Baton Rouge National Cemetery and, in 1867, it was designated a national cemetery. Remains were brought to Baton Rouge National Cemetery from the battlefields near Baton Rouge as well as the surrounding area, including Plaquemine, La., and Camden, Ark. At the end of the Civil war, it was reported that the government paid a bonus to anyone who discovered the grave of a Union soldier so that his remains could be reinterred in the national cemetery.

A “substantial wooden fence” enclosed the cemetery until 1878, when the government contracted with Michael and Bernard Jodd to build a brick wall around the cemetery. Unfortunately, before the wall was completed both men died in a yellow fever epidemic and were interred in the cemetery; local workmen completed the wall.

In 1886, the remains of Gen. Philemon Thomas were disinterred from the old Baton Rouge post cemetery and reinterred in the national cemetery. Thomas was born in Virginia in 1763 and died in Baton Rouge on Nov. 18, 1847. He fought in both the Revolutionary War and the War of 1812, and commanded the forces that captured the Spanish fort at Baton Rouge in 1810. Later in life, Thomas served in both the Kentucky and Louisiana legislatures and was twice elected to the U.S. Congress.

There are 20 large flat markers in Section 3. Many are cracked and the majority of the inscriptions have been worn away by the elements. Some of these markers were placed in other cemeteries as early as 1830 and the remains, along with the large markers, were moved to the Baton Rouge National Cemetery circa 1890. The decedents were both adults, as well as children of officers. Removal of a levee by the U.S. Army Engineers necessitated discontinuance of a cemetery known as the Old Post Cemetery of the Arsenal Grounds.

More than half of VA's national cemeteries originated with the Civil War and many are closed to some burials. Other sites were established to serve World War veterans and they continue to expand. Historic themes related with NCA's cemeteries and soldiers' lots vary, but visitors should understand "Why is it here?" NCA began by installing interpretive signs, or waysides, at more than 100 properties to observe the Civil War Sesquicentennial (2011-2015). Please follow the links below to see the interpretive signs for Baton Rouge National Cemetery.