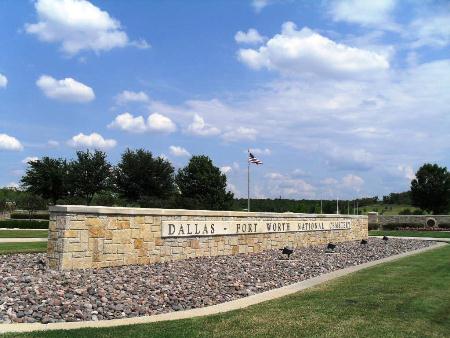 The Dallas-Fort Worth National Cemetery was dedicated and opened for burials on May 12, 2000. The cemetery is situated on a 638.5-acre parcel of land that overlooks picturesque Mountain Creek Lake. The gently rolling hills provide a pastoral setting for visitors as they proceed along the central boulevard to the small lake adjacent to the assembly area and committal shelters.

There are instances when you should contact the National Cemetery directly such as:

Burial space: Cremated remains may be placed in ground with a flat marker or in the above ground columbarium wall. The Dallas-Fort Worth National Cemetery recently completed the Phase II expansion project of an additional 53 developed acres; providing an additional 20,500 casketed burial sites and 4,000 columbarium niches.

General Information Kiosk: There are two locations. The Public Information Center Kiosk is available during visitation hours and the Administration Office Kiosk is available during business hours only. The Kiosk contains the names of veterans and their eligible dependents buried at the cemetery. The Kiosk will generate a printed map with the name of the decedent and their grave location

Please note that the Navy, Marines, and Coast Guard WILL NOT provide honors if they are not confirmed directly with the above offices. While our office works with the military honor details, we cannot tell them what to do and when to do it. Some of the branches are no longer offering "full" military honors for retirees. The military requirement is a two-man team, with folding of the flag and rendering of Taps. If you have a concern with this, please contact the military honor branch office directly. If you choose to use a private organization to support your family’s service, please contact them directly.

Floral arrangements accompanying the casket or urn at the time of burial will be placed on the completed grave. Please limit your gravesite arrangements to one arrangement for cremation sites and two arrangements for casketed sites.

January - December
Fresh cut flowers may be placed on gravesites throughout the year. They will be removed as soon as they become unsightly. Faded and unsightly floral items are removed daily from gravesites. Temporary floral containers are available for use.

October 1st – April 1st
Artificial flowers are acceptable only during this time and will be removed when they become unsightly.

December 1st - January 20th
Christmas wreaths and grave blankets are permitted only during this time and may not be larger than two (2) ft. by three (3) ft.

Potted plants will only be permitted on gravesites 10 days before and l0 days after Easter, Memorial Day, and Christmas.

Plantings are not permitted at any time.

Floral items and other types of decorations may not be secured or adhered to headstones, markers or niche covers at any time or they will be removed.

Statues, vigil lights, shepherd’s hooks, breakable objects of any nature, and similar commemorative items are not permitted on gravesites at any time.

During the growing seasons, all floral items will be removed from gravesites every two weeks; however, fresh flowers are removed as soon as they become unsightly.

Flowers may be placed directly on the ground or in a temporary floral container in front of the Columbarium or gravesite.

All items become U.S. Government property and will be disposed of accordingly. Please be aware that the National Cemetery is not responsible for maintaining, replacing and/or safeguarding items placed on gravesites.

Currently, more than 1.5 million veterans live in the state of Texas and approximately 460,000 reside in the cemetery's service area. The Dallas-Fort Worth National Cemetery has developed 152 acres of the 638-acre cemetery providing 85,778 casketed sites and 31,918 columbaria/garden niches for cremated remains. Fully developed, Dallas-Fort Worth National Cemetery will provide burial space for 280,000 eligible veterans and dependents.

Sergeant Candelario Garcia (Vietnam). Candelario Garcia, a native of Texas, enlisted in the U.S. Army in 1963, and was assigned to Company B, 1st Battalion, 2nd Infantry, 1st Brigade, 1st Infantry Division, also referred to as the Big Red One during the Vietnam War. On March 14, 2014, Sergeant Garcia received the Medal of Honor, posthumously, for conspicuous gallantry and intrepidity at the risk of his life above the call of duty. While acting as team leader, Garcia initiated an attempt to aid wounded comrades and opened himself to enemy fire. He eliminated two enemy machine-gun positions on December 8, 1968 near Lai Khe, Republic of Vietnam. Garcia died January 10, 2013, and is buried in Section 107, Site 209.

Private First Class William Blair Jr. was born in 1921 in Dallas. He served in the army, and it is said he was the youngest African American to serve as first sergeant in World War II. In 1946 he pitched on Negro League baseball teams the Indianapolis Clowns and Detroit Stars. In 1949, he founded Southwest Sports News, which published college athletics nationwide. Later it was reformatted to become Elite News, with a focus on political, social and economic topics important to the North Texas black community. For his athletic, journalistic, and civil rights accomplishments, the City of Dallas renamed Rochester Park "William 'Bill' Blair Jr. Park" in 2011. Blair donated his business papers and Negro League memorabilia to the University of Texas at Arlington. He died April 20, 2014, and is buried at Dallas-Fort Worth National Cemetery (Section 91, Site 585).

Bobbie Joe Cavnar was the 22-year-old pilot of the big four-engine Douglas C-54 that rescued a stranded crew of the wrecked B-29 "Kee Bird" from the far northwest tip of Greenland in February 1947. Cavnar landed his transport plane on a small frozen glacial lake near the wreck. He was awarded the Distinguished Flying Cross for his actions and personally congratulated by President Harry S. Truman. He retired from the Air Force as a Colonel in 1964. (Section 11, Site 99).

Gunner's Mate Third Class Glenn Edward McDuffie served in the Navy during World War II and he claimed to be the American sailor kissing a nurse in the famous Life magazine image "V-J Day in Times Square" by photographer Alfred Eisenstaedt. After the war McDuffie became a mail carrier and semi-professional baseball player. Several years before McDuffie died, Houston Police Department forensic artist Lois Gibson confirmed that McDuffie was the famous kissing sailor. He died March 9, 2014, and is buried at Dallas-Fort Worth National Cemetery (Section 178, Site 281).

Born in Lake City, Florida, George Allen Summerall, Jr., (1930-2013) was a gifted athlete. He played football, basketball, baseball, and tennis, and found success in all four sports during high school. Summerall played collegiate sports for the University of Arkansas and professional football for teams in Detroit, Chicago, and New York from 1952 to 1961. Summerall's athletic career was interrupted by military service after he enlisted in the U.S. Army in 1955. When he retired from the field, Summerall became a radio and television sports announcer and covered football as well as golf and tennis. For more than a decade, Summerall worked beside colorful former football coach John Madden as they defined the sport-broadcasting medium. When he died in Dallas, the army private and sports veteran was buried in Columbarium D, Court 1, Site D79.