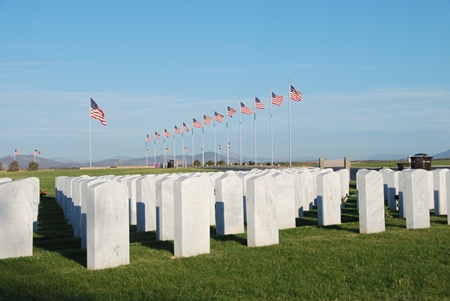 Fresh cut flowers may be placed on graves and in the gravel areas surrounding the Columbarium, Memorial Walls or Memorial Monuments at any time.

Cemetery furnished temporary flower containers are available and located throughout the cemetery in specially marked containers.

Floral pickup is the 1st and 3rd Wednesday of each month along with daily pick up of faded or unsightly arrangements.

Plantings will not be permitted on graves and in the gravel areas surrounding the Columbarium, Memorial Walls or Memorial Monuments at any time.

Potted plants will be permitted on graves and in the gravel areas surrounding Columbarium, Memorial Walls or Memorial Monuments five days before and five days after Easter Sunday and Memorial Day. During the winter season a Holiday wreath or plant is allowed from December 1 to January 15. Floral blankets are not authorized due to year round growing season.

To maintain the dignity of the cemetery, items such as candles, statues, glass of any kind, vigil lights, shepherd's hooks, wind chimes, pinwheels, balloons, memorabilia, or any item exceeding 24" inches in height are not permitted on graves and in the gravel areas surrounding the Columbarium, Memorial Walls or Memorial Monuments, at any time.

Items of any type will not be secured to Headstones, Niches, Memorial Markers or Memorial Monuments.