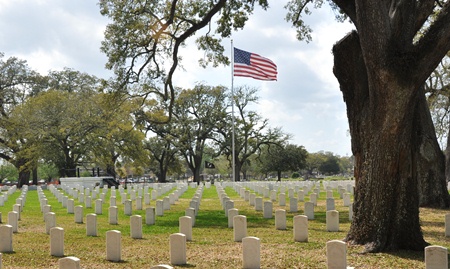 Mobile National Cemetery is closed to new interments. The only interments that are being accepted are subsequent interments for veterans or eligible family members in an existing gravesite. Periodically however, burial space may become available due to a canceled reservation or when a disinterment has been completed. When either of these two scenarios occurs, the gravesite is made available to another eligible veteran on a first-come, first-served basis. Since there is no way to know in advance when a gravesite may become available, please contact the cemetery at the time of need to inquire whether space is available.

Military Funeral Honors
Arrangements for military funeral honors are the responsibility of the funeral director or the family. The Barrancas Cemetery staff will provide the contact telephone numbers upon request.

Artificial flowers will be permitted on graves only during the period from Nov. 10 through March 15.

Potted plants will be permitted on graves only during the period extending 10 days before through 10 days after Easter Sunday, Memorial Day, Veterans Day and Christmas.

Christmas wreaths, grave blankets and other seasonal adornments may be placed on graves from Dec. 15 through Jan. 10.

Mobile National Cemetery was established in 1865 after the Port of Mobile fell into Union hands under the assault of Rear Admiral David Farragut during the Civil War.

Two years after defeating the Confederate fleet at Vicksburg, Farragut was summoned from his New York home to lead an attack on Mobile Bay, the last Confederate stronghold in the Gulf of Mexico. Mobile was not only protected by Fort Morgan and a fleet of wooden vessels, but also by the formidable confederate ship, the Tennessee and a field of explosive mines called torpedoes. Undaunted, Farragut readied his fleet for battle. Using a strategy that had worked before, he ordered his wooden ships lashed together in pairs, one large ship and one small ship. In this manner, if the larger frigate was disabled in battle, the smaller vessel could tow it to safety.

Farragut's fleet of wooden ships, along with four small ironclad monitors, began the attack on Mobile Bay early in the morning of Aug. 5, 1864. When the smoke of battle became so thick that he couldn't see, Farragut climbed the rigging of the Hartford and lashed himself near the top of the mainsail to get a better view. It wasn't long before the Tecumseh, one of the monitors leading the way, was struck by a torpedo and sank. In a state of confusion, the fleet came to a halt in front of the powerful guns of Fort Morgan. Realizing the fleet was reluctant to move forward due to the "infernal machines," Farragut rallied his men to victory, shouting: "Damn the torpedoes! Full speed ahead!"

The Union fleet steamed through the minefield, blasted Fort Morgan, and captured the Confederate ironclad Tennessee. Mobile Bay fell into Union hands in one of the most decisive naval victories of the Civil War.

When Union forces first took Mobile, they interred their casualties in portions of the city-owned Magnolia Cemetery, but following the Army's request for additional burial space, Mobile provided the Union troops with three acres. The first interments were remains from surrounding military sites and forts. An inspector's report of the cemetery, dated February 1871, states that of 841 burials only 124 were identified. In 1872, the Army ranked Mobile a first-class cemetery, a categorization probably based on size and activity; by 1876 it was reassessed as a second-class cemetery.

In addition to the number of Civil War dead, a number of Apache Indians are buried in Mobile National Cemetery. After Geronimo's surrender, members of the Apache nation were first sent to Florida, then transferred to Vernon Barracks. During their time at the barracks, 13 fell ill and were subsequently buried here, including Chappo, the son of the great Apache leader Geronimo.

Mobile National Cemetery was placed on the National Register of Historic Places in 1986.

Monuments and Memorials
The 76th Illinois Volunteer Infantry Regiment Monument was erected in 1892 by survivors of the Battle of Port Blakely, Ala., in honor of their fallen comrades.

The Confederate Fortification Monument marks the remains of an old Confederate breastwork. The granite monument was erected by the United Daughters of the Confederacy in 1940.

There are also 4 Confederate soldiers interred in the cemetery.

More than half of VA's national cemeteries originated with the Civil War and many are closed to some burials. Other sites were established to serve World War veterans and they continue to expand. Historic themes related with NCA's cemeteries and soldiers' lots vary, but visitors should understand "Why is it here?" NCA began by installing interpretive signs, or waysides, at more than 100 properties to observe the Civil War Sesquicentennial (2011-2015). Please follow the links below to see the interpretive signs for Mobile National Cemetery.