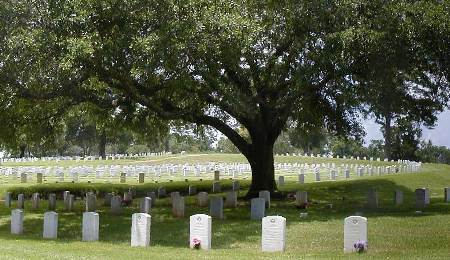 Last month, the US Army Corps of Engineers awarded a contract for the bluff stabilization project. As a safety precaution during construction, the cemetery's expansion side is closed to vehicle traffic.

Families can visit their loved one's graves by parking in front of the administration building on the cemetery's east side. Visitors are asked to use caution when crossing the street and be conscious of construction vehicles entering and exiting the cemetery.

The cemetery remains open for interments and committal services are held in the old committal shelter. No gravesites will be impacted during construction. The project is expected to be completed next summer.

Bluff Stabilization Project Update (May 2021)
NCA and US Army Corps of Engineers (USACE) have been working together to engineer a long-term bluff stabilization project at Natchez National Cemetery.

Due to the unprecedented rainfall this spring, USACE recently completed temporary mitigation efforts to reduce the risk of significant erosion along the bluff. Both organizations expect the award of a construction contract for the bluff stabilization project in mid-July.

No gravesites are impacted by the erosion, nor are any gravesites located near the recently placed mitigation measures. The immediate mitigation measures include tarps and sandbags placed along the bluff to direct rainfall toward the city's storm water drainage system. This should help significantly to reduce water soaking into the soil at the bluff's edge.

Additionally, as a preventative measure, the committal shelter has been closed along the bluff. Interments continue and committal services will be held in a temporary shelter in another part of the cemetery.

Landsman Wilson Brown (Civil War). Wilson Brown was born into slavery in 1841 at Natchez, Mississippi. During the Civil War, Brown escaped to the Navy gunboat U.S.S. Hartford and enlisted in 1863. Landsman Brown served until 1865, including on board the Hartford, and returned to Natchez at war's end. During the Battle of Mobile Bay (Alabama) on August 5, 1864, Brown was knocked unconscious in the ship's hold by a shell burst. He regained consciousness and returned to supplying cannon ammunition. Brown was awarded the Medal of Honor for bravery. He died in January 1900 and is buried in Section G, Site 3152.