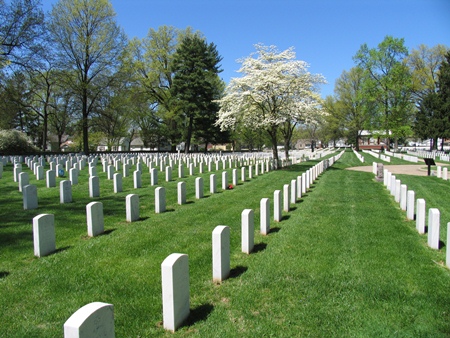 This cemetery is supervised by Zachary Taylor National Cemetery. They can be contacted at the number listed above.

New Albany National Cemetery is located New Albany, Ind., just across the Ohio River from Louisville, Ky. Founded just below the Falls of the Ohio, New Albany was first settled in the early 1800s by farmers who recognized the town’s potential as a transportation and ship-building hub. The first settlers in the region named the territory after the capital of their home state, New York. Prior to construction of the locks on the Louisville side of the river, New Albany was one of the largest cities in the Midwest due to its river location. Riverboat building and glass manufacturing were important industries. In 1858, Ashbel P. Willard, governor of Indiana and a New Albany resident, dedicated the Floyd County Fairground, and the following year the Indiana State Fair came to town. During the Civil War, the fairground was converted into Camp Noble where local regiments were mustered. New Albany became a strategic supply and training center for the Union troops fighting in the South, and a hospital center for the wounded being sent north, as well as part of the Underground Railroad for slaves escaping from the South.

New Albany National Cemetery was established in 1862 to accommodate the burial of soldiers posted at the training center. It was also intended for the reinterment of Union soldiers who died in local hospitals and were buried in nearby gravesites and soldier’s plots. Most of the reinterments came from West Virginia, Virginia, Kentucky and Indiana. The original 5.5 acres were purchased from Dr. Charles Bowman in early 1862. By November 1870, more than 2,000 known dead and 698 unknowns were buried at New Albany. According to a 1870s inspection report, the African-American men of the U.S. Colored Troops were buried in segregated sections from their fellow soldiers.

Today a suburban residential community envelops the cemetery, which was placed on the National Register of Historic Places in 1999.

More than half of VA's national cemeteries originated with the Civil War and many are closed to some burials. Other sites were established to serve World War veterans and they continue to expand. Historic themes related with NCA's cemeteries and soldiers' lots vary, but visitors should understand "Why is it here?" NCA began by installing interpretive signs, or waysides, at more than 100 properties to observe the Civil War Sesquicentennial (2011-2015). Please follow the links below to see the interpretive signs for New Albany National Cemetery.