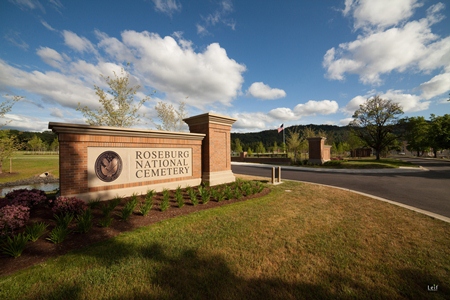 Directions to the Roseburg National Cemetery Annex located at 913 NW Garden Valley Blvd. are as follows: Heading North on I-5, take exit 124. Left at stoplight on Harvard. Right on Stewart Park Dr. Cross the bridge. Cemetery is on right.

Directions to the historic Roseburg National Cemetery located at 1770 Harvard Blvd. are as follows: Heading North on I-5, take exit 124. Left at stoplight on Harvard. Cemetery will be on your right.

The Eagle Point National Cemetery staff manages this cemetery. Please contact them at the number listed above.

The Roseburg National Cemetery Annex, including the new administrative office, is located at 913 NW Garden Valley Blvd. The Annex has space available to accommodate full casket interments and in-ground cremated interments. A scatter garden is also available. There is also a columbarium wall for urn placements at the Annex.

The historic section of Roseburg National Cemetery is located at 1770 Harvard Blvd. This location only has space available to accommodate subsequent interments.

Roseburg National Cemetery was established in 1897 to serve veterans residing at the Oregon State Soldiers’ home. The Oregon Soldiers’ Home itself opened in 1893 to "provide a home for honorably discharged soldiers, sailors and marines who had served in any wars in which the United States was engaged, or who served in the Indian Wars of Oregon, Washington or Idaho, provided they were or might become citizens of Oregon."

Major Joseph Raymond Giesel, who was white, was among the first officers to train African-American marines. He was awarded the Congressional Gold Medal in 2012 for his role at Montford Point, the segregated North Carolina facility where an estimated 20,000 black men trained from 1942-1949. The Marine Corps was white-only until 1942, when President Roosevelt directed that black soldiers be trained at Montford Point. Giesel served 21 years in the marines, in the Pacific Theater during World War II and in Korea in 1953. He died June 20, 2014, and is buried at Roseburg National Cemetery (Section 6, Site 131).