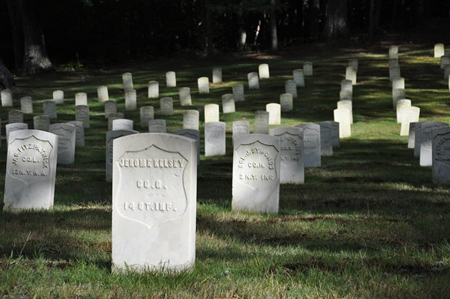 Office Hours: Please contact the Massachusetts National Cemetery at the number above Monday thru Friday - 8:00 a.m. to 4:30 p.m. for information.

Togus National Cemetery is closed to new interments. The only interments that are being accepted are subsequent interments for veterans or eligible family members in an existing gravesite. Periodically however, burial space may become available due to a canceled reservation or when a disinterment has been completed. When either of these two scenarios occurs, the gravesite is made available to another eligible veteran on a first-come, first-served basis. Since there is no way to know in advance when a gravesite may become available, please contact the cemetery at the time of need to inquire whether space is available.

Floral arrangements accompanying the casket or urn at the time of burial will be placed on the completed grave. Natural cut flowers may be placed on graves at any time of the year. They will be removed when they become unsightly or when it becomes necessary to facilitate cemetery operations such as mowing. Water is available at outside faucets from April 15 to Oct. 10.

The cemetery will provide temporary floral containers to the public for displaying floral arrangements. Containers such as pots, baskets, etc. are not authorized. Privately owned, permanent in-ground flower containers are not allowed.

Artificial flowers will be permitted on graves from Oct. 10 through April 15 and may be removed when their presence interferes with grounds maintenance.

Potted plants will be allowed on graves for a period extending 10 days before through 10 days after Easter Sunday.

Christmas wreaths, grave pillows (3x2) and other seasonal adornments may be placed on graves from Dec. 1 through Jan. 20. They may not be secured to headstones or markers.

Togus National Cemetery is located in Kennebec County, in the town of Chelsea, Maine, on the grounds of the Department of Veterans Affairs Medical and Regional Office Center.

The name Togus comes from the Native American name Worromontogus, which means mineral water. The Togus property was originally a summer resort called Togus Springs. It was owned and operated by Horace Beals, a wealthy granite merchant from Rockland, Maine, who hoped to establish a racing and resort community like Saratoga Springs, N.Y. He invested over $250,000 in a hotel, stables, bowling alley, farmhouse, bathhouse, driveways and racetrack. The untimely resort opened in 1859 but failed to generate business due to the Civil War. The resort, known locally as "Beals' Folly," closed in 1863. Beals died shortly after his business failed and the government obtained the property for $50,000. The spot was selected because of its isolation from large cities, well-known spring and bargain price tag.

In 1865, as the Civil War was drawing to a close, President Abraham Lincoln signed an act establishing the National Asylum (later changed to Home) for Disabled Volunteer Soldiers. The Eastern Branch at Togus was the first of these facilities to open, in November 1866.

The first veteran was admitted to Togus on Nov. 10, 1866. The home’s population remained below 400 until a building program began in 1868, which eventually provided accommodation for nearly 3,000 veterans. The facilities were organized much like a military camp with men living in barracks and wearing modified Army uniforms. Although a 100-bed hospital was completed in 1870, medical care at the home was limited, even by the standards of the day.

Togus was a relatively isolated location until 1890, when a narrow-gauge railroad from the Kennebec River in Randolph and an electric trolley line from Augusta were completed. These transportation improvements led to the home becoming a popular excursion destination for Sunday picnics. The grounds featured a zoo, hotel and theater that brought shows directly from Broadway. Band concerts were also held there regularly. The facility became part of the Veterans Administration (VA) in July 1930 when all agencies administering benefits to veterans were consolidated.

Eastern Branch - National Home for Disabled Volunteer Soldiers' Soldiers & Sailors Monument, 1889
The Soldiers and Sailors Monument was erected in 1889 at what was the north end of the cemetery (now West Cemetery) at Togus VAMC, historically the Eastern Branch - National Home for Disabled Volunteer Soldiers (NHDVS). All cemeteries affiliated with the eleven oldest NHDVS branches, designated national cemeteries in 1973, feature a prominent monument, typically an obelisk. Governor Luther Stephenson purportedly lamented that other Homes already had a monument, leading to this one being built at Togus by residents. No record has been found to indicate who among the 2,000 or so residents at time worked on the structure.

The 1890 National Home annual report described the monument as "very handsome in its rough simplicity, and is a source of pride to the men." The design was reputedly drawn by William Spaulding, a home resident and former marble worker from Philadelphia, PA; stonework may have been completed under the supervision of Jeremiah O'Brien, also a home member and formerly a noted stonecutter of Quincy, MA.

The three-tiered obelisk is approximately 26 feet tall and 11 feet square at the base, built of ashlar granite blocks about 1 foot high by 2 feet wide each. Four polished granite plaques are centered of each side of the upper base. The west face is inscribed: "In memory of the soldiers and sailors who fought for the Union." In 1922, National Home officials approved the replacement of the plaque on the east face "with a slab bearing an inscription showing dates of all wars in which those who served are entitled to membership in the National Home": "WAR WITH GREAT BRITAIN 1812–1815 / WAR WITH MEXICO 1846–1849 / WAR OF THE REBELLION 1861–1865 / WAR WITH SPAIN 1898–1899 / PHILLIPINE INSURRECTION 1898–1902 / WORLD WAR 1917–1918."

More than 120 years after its dedication, NCA conservators determined that the monument's inner core was so deteriorated that it had to be rebuilt. In June 2010, as masons began to dismantle the monument, they discovered a time capsule – a copper box which contained newspapers, NHDVS annual reports and photographs. With the box was a green glass bottle and the bowl of a smoking-pipe. The rebuilt monument features a new foundation and core. NCA rededicated the Soldiers and Sailors Monument on September 15, 2010, in a ceremony that included the placement of a new time capsule under the capstone.

Made of reinforced concrete with a white protective coating, the overall monument is 10 feet high and nearly 7 feet square at the base. The form is reminiscent of an altar: the tall base has corner posts that support a roof, which covers two angled marble plaques. The main plaque reads: "In Memory of the / Soldiers and Sailors / who served their country / in the War with Spain 1898 / Philippine Insurrection 1899–1902 / China Relief Expedition 1900 / Indian Campaigns."

Celtic Cross, ca. 1930
The Celtic Cross Monument is located in the Togus East Cemetery. Little is known about this structure—the designer, builder, and donor have not been identified—but it is believed to have been erected about 1930. Carved from a single piece of Hallowell granite, the large cross stands more than 13 feet tall and is tapered from base to top. It is mounted on a stepped granite base inscribed with "LET THEM REST IN PEACE."

Landsman John Preston (Civil War). He received the Medal of Honor while serving in the U.S. Army on board the U.S.S. Oneida during the Battle of Mobile Bay, Alabama, August 5, 1864. Preston died in 1885 and is buried in Section H, Site 456.

More than half of VA's national cemeteries originated with the Civil War and many are closed to some burials. Other sites were established to serve World War veterans and they continue to expand. Historic themes related with NCA's cemeteries and soldiers' lots vary, but visitors should understand "Why is it here?" NCA began by installing interpretive signs, or waysides, at more than 100 properties to observe the Civil War Sesquicentennial (2011-2015). Please follow the links below to see the interpretive signs for Togus National Cemetery.