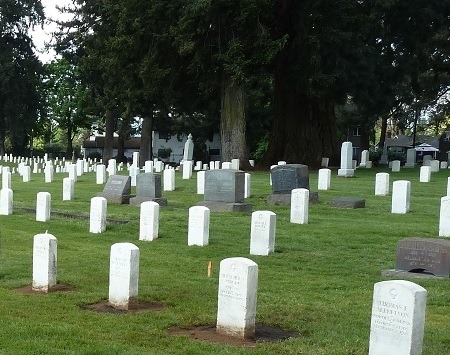 Visitation Hours: The cemetery is open to the public daily from dawn to dusk.

This cemetery has space available to accommodate cremated remains only.

From Portland International Airport: Head northwest on NE Airport Way to merge onto I-205 N. Take exit 27 toward Vancouver, keep left at the fork and merge onto WA-14 W. In approximately 5 miles, take I-5 N toward Seattle. Take exit Fourth Plain Blvd exit, proceed East approximately one block, and the cemetery will be on the left.

The office for the cemetery is located off-site. Willamette National Cemetery oversees this cemetery, please call 503-273-5250.

Please note there are no restroom facilities at the cemetery.

Holiday wreaths, grave pillows (2x2) and other seasonal adornments may be placed on graves from Dec. 7 through Jan. 5. They may not be secured to headstones or markers.

During the mowing season, arrangements are removed from gravesites on a weekly basis or when they become withered and unsightly.

Vancouver Barracks Post Cemetery became a VA National Cemetery on March 6, 2020, when it was transferred to NCA by the Department of the Army in fulfillment of Executive Order 13781 and the VA's own Agency Reform plan. It was the fifth cemetery transferred to the NCA by the Army since June 2019.

Vancouver Barracks was established in 1849 as the first U.S. Army post in the Pacific Northwest. It closed as an active post in 2011. The cemetery contains more than 1,500 occupied gravesites, including U.S. military personnel, civilians, foreign personnel, German and Italian POW's, Native Americans and Unknowns.

First Lieutenant William W. McCammon (American Civil War). He received the Medal of Honor while serving in the U.S. Army, Company E, 24th Missouri Infantry, for actions in Corinth, Miss., on Oct. 3, 1862. Citation: "While on duty as provost marshal, voluntarily assumed command of his company, then under fire, and so continued in command until the repulse and retreat of the enemy on the following day, the loss to this company during the battle being very great." McCammon died in 1903 and is buried in Section 4W, Grave 412.

Musician Herman Pfisterer (War with Spain). He received the Medal of Honor while serving in the U.S. Army, Company H, 21st Infantry, for actions in Santiago, Cuba, on July 1, 1898. Citation: "Gallantly assisted in the rescue of the wounded from in front of the lines and under heavy fire from the enemy." Pfisterer died in 1905 and is buried in Section 4E, Grave 448.

First Sargent Moses Williams (Indian War Campaigns). He received the Medal of Honor while serving in the U.S. Army, Company I, 9th U.S. Cavalry, for actions at foothills of the Cuchillo Negro Mountains, New Mexico, on Aug. 16, 1881. Citation: "Rallied a detachment, skillfully conducted a running fight of 3 or 4 hours, and by his coolness, bravery, and unflinching devotion to duty in standing by his commanding officer in an exposed position under a heavy fire from a large party of Indians saved the lives of at least three of his comrades." Williams died in 1899 and is buried in Section 8W, Grave 393.