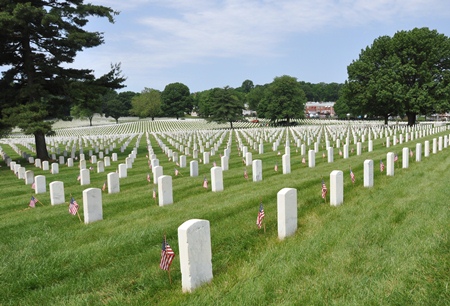 There is a KIOSK located on the side of the administration building to assist you in finding a gravesite. It contains the names of veterans and their eligible dependents buried at Annapolis, Baltimore and Loudon Park National Cemeteries. The KIOSK will generate a printed map with the name of the decedent and their grave location.

Annapolis, Loudon Park and Point Lookout cemeteries date back to the Civil War. Our sites at Congressional Cemetery date back to 1807.

The site occupied by Baltimore National Cemetery was an estate called Cloud Capped (or Cap), which occupied an elevated location adjacent to Frederick Road as early as 1750. The property was part of the holdings of the Baltimore Company and Charles Carroll of Carrollton. Residents apparently observed the attacking British fleet sailing toward Fort McHenry in 1814, and sent a messenger to warn the city. In 1890, when Blanchard and Susan Randall acquired the estate as a summer home, its 90 acres were studded with mature specimen trees including spreading beech, white pine, Norway spruce, chestnut and walnut. This early 19th century brick dwelling was enlarged and additions were made over the years.

Nearby, the diminutive 5.2-acre Loudon Park National Cemetery was at or approaching capacity, and additional burial space was needed. At the same time that the War Department was assessing 33 possible sites in the Baltimore area as an extension of Loudon Park, it was also seeking acreage in the New York City, Minneapolis-St. Paul, Minn., and El Paso, Texas, areas for new veterans' cemeteries. Once officials selected the gently rolling tract above Baltimore, Congress approved $100,000 for the project.

Conversion of the Cloud Capped estate to a national shrine was the responsibility of the War Department, with work accomplished under the Works Progress Administration (WPA), a Depression-era make-work program. The WPA undertook work at several national cemeteries during its lifetime in the 1930s and early 1940s. The Baltimore property — envisioned as Maryland's "Little Arlington" — was to accommodate 40,000 to 45,000 interments.

The government took possession of the 72.2-acre Cloud Capped in September 1936 at a cost of $95,000, provided in the Army Appropriations Act for fiscal year 1937. Between 1936 and 1938, nearly $400,000 was expended on WPA improvements to Baltimore National Cemetery. Funds were spent on "surveys, roads, gates, fences, razing old mansion, new lodge, utilities, out-buildings, preparing and monumenting grave-sites, and landscaping." An estimated 100-150 men worked on the project between early 1937 and August 1940.

The old mansion was demolished in 1937, and the superintendent's lodge, a two-story Federal Revival building similar to one wing of Cloud Capped, was constructed largely using salvaged materials, and was nearly completed the same year. The new lodge cost $90,000 including WPA labor. A Tudor Revival cottage, intended for an assistant superintendent, was renovated in 1940. The chapel was completed in 1939-40. The granite entrance gates and iron fence was erected in 1937-39 at a cost of $6,625. The first superintendent, G. B. Alexander, went on duty in March 1937.

The first interment was Dec. 18, 1936, although the cemetery was formally dedicated on Memorial Day, May 30, 1941. The dedication ceremonies were to commence in the city's Lafayette Square, led by African-American veterans of World War I, affiliated with American Legion Post No. 14. Today the cemetery is comprised of 72.2 acres.

Monuments and Memorials
There are seven monuments honoring the six Marine Divisions from World War II in the Memorial Area. These monuments are dedicated to all the members of each of the divisions who served in World War II and to the memory of those who made the ultimate sacrifice to this great nation.

Water Tender Laddie Stupka. He received the Medal of Honor while serving in the U.S. Navy for actions on board the U.S.S. Leydon when the vessel wrecked, January 21, 1903. Stupka’s citation was awarded under the name of Loddie. Stupka died in 1946 and is buried in the Distinguished Service Section, Site 1.

Other Burials
Horace Bivins (1866-1960) was born and raised in Accomack County, VA, on his parents’ farm. He attended the Hampton Institute and enlisted in the army in 1887, where he served in the 10th Cavalry. Bivins’ career as a Buffalo Soldier took him to the Southwest United States, Cuba, Philippines, and ultimately back to the East Coast. He retired briefly in 1913. As a commissioned officer in 1918, he rejoined the army to fight in World War I. Captain Bivins is remembered as one of the authors of the book Under Fire with the 10th Cavalry (1899) and as the army’s first Double Distinguished shooter. The army’s top marksman won 32 awards, including gold medals in carbine and revolver competitions. He received the silver star retroactively for “conspicuous gallantry” during the Spanish-American War. “Buffalo Bill” Cody reportedly tried to recruit Bivins for his Wild West show because of his shooting skills. Bivins married in 1904 and lived in Billings, MT, until 1949. Thereafter he moved to Philadelphia where his World War II-veteran son lived. Captain Bivins died December 4 and is buried in Baltimore National Cemetery (Section C, Site 753-W).

Hattie Carroll was born in 1911, and while her death made the national news, details of her life as an African-American woman are less recognized. She married James F. Carroll (1912-1987) in the 1930s. In February 1963 Hattie Carroll died after William Zantzinger, a white farmer, hit her with a toy cane. The mother of 11 and church leader worked part time as barmaid, that night at the Emerson Hotel in Baltimore, MD. Zantzinger, a guest at the hotel ball, swore at her and struck her because he did not think she served him quickly enough. He was sentenced to six months in jail on August 28, the same day Civil Rights advocates marched on Washington, D.C., and Martin Luther King, Jr., gave his "I Have a Dream" speech. Carroll was immortalized by musician Bob Dylan in the folk ballad, "Lonesome Death of Hattie Carroll." Dylan's haunting song captured the racism that King sought to end. Carroll is buried with her World War II navy veteran husband in Baltimore National Cemetery (Section K, Site 40).

Robert Cole was born in Vermont in 1920. He joined the U.S. Army Air Corps and completed flight training in December 1944 during World War II. Flight Officer Cole served with the 99th Fighter Squadron until March 1946, and as the war ended he flew with other Tuskegee Airman in airshows throughout the United States. By the late 1940s Cole returned to Vermont where he worked as a shoemaker and flew planes from the Barre-Montpelier airport. The Tuskegee Airmen received the Congressional Gold Medal for their service in 2006. Cole's honor was posthumous. He died August 19, 1968, and is buried in Baltimore National Cemetery (Section H, Site 238).

Emily Noisette (1921-2011) was born in Maryland and lived in Baltimore with her grandmother as a young woman. She was one of 800 or so "women in technicolor" who overcame racial prejudice serving in the Women's Army Corps during World War II. Noisette enlisted in the U.S. Army in 1943 and joined the new "six triple eight" battalion, the only all-female, all-black unit to serve overseas. Abiding to the motto "no mail, low morale," the 6888th Central Postal Directory Battalion redirected a six-month backlog of mail to troops. The battalion arrived in Scotland in early 1945 and was stationed in Birmingham, England, then Rouen, France. Private First Class Noisette was discharged in December 1945. She married North Carolinian John Milton Cox, Jr., (1924-1957) who lived in Baltimore by 1940; he also served in the army during the war. Noisette Cox is buried alongside her husband in Baltimore National Cemetery (Section N, Site 238).