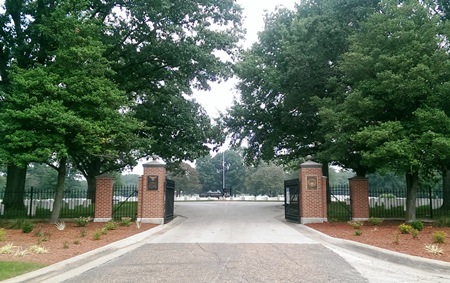 Artificial flowers will be permitted on graves during periods when their presence will not interfere with grounds maintenance. As a general rule, artificial flowers are permitted on graves during the period of October 10 through April 15. Potted plants will be allowed on graves 10 days prior to Easter only. These plants must be removed 10 days after Easter. Potted plants will not be allowed at any other time.

Christmas wreaths, grave pillows and other seasonal adornments may be placed on graves from Dec. 1 through Jan. 20. They may not be secured to headstones or markers.

Camp Butler National Cemetery is located in Sangamon County near Riverton, Ill., and occupies a portion of what was the second-largest military training camp in Illinois during the Civil War.

Soon after the firing on Fort Sumter in 1861, President Abraham Lincoln issued a proclamation calling for troops to defend the Union. Each state struggled to fulfill the president’s request but found the available men woefully unprepared for the rigors of war. The obvious solution, to federal officials, was to establish facilities for the receipt and training of war recruits. In 1861, the War Department dispatched General William Tecumseh Sherman to Springfield, Ill., to select a site for a military training camp. Illinois Governor Richard Yates tasked the state treasurer, William Butler, with assisting the general. The men found an ideal location six miles outside of Springfield with a high ground for camping purposes and a lower, more-level area for drills and training, as well as space for a cemetery. General Sherman was pleased with the site and named it Camp Butler to honor his companion.

The first troops arrived at Camp Butler in August 1861 and by the end of the month, 5,000 men occupied the camp. As the war progressed, additional uses were found for the grounds, including a prisoner of war camp. In February 1862, approximately 2,000 Confederate soldiers captured when Fort Donelson was surrendered, arrived at Camp Butler. As the POWs arrived–from all 11 southern states except Florida—they were put to work constructing a stockade and hospital. The hastily constructed barracks were inadequate and poorly constructed. Sanitation facilities were primitive and the daily ration of food often consisted of little more than hard biscuits and a cup of thin coffee. Almost immediately, the POWs began to die at a rapid rate. The heat of the summer combined with the severe winter cold, as well as diseases such as smallpox, typhus and pneumonia, decimated the prisoner population. Roughly 700 POWs died in the smallpox epidemic of summer 1862.

Monuments and Memorials
The only memorial at Camp Butler is a carillon the American Veterans (AMVETS) donated around 1970 as part of their international living memorial program, which began shortly after World War II.

A monument honoring the Illinois LST sailors was erected in May 2006.

Seaman John H. Catherwood, (Philippines, 1911). He received the Medal of Honor while serving in the U.S. Navy, for actions while attached to the U.S.S. Pampanga on the island of Basilan, Philippine Islands, on September 24. Catherwood died in 1930 and is buried in Section F, Site 1.

Other Burials
George W. Ford was a career national cemetery superintendent and civil rights activist whose headstone at Camp Butler National Cemetery, IL, reads “Supt. of this cemetery for 24 years,” reveals nothing of his remarkable life. Born a free black in 1847, he became one of the first African Americans appointed as a national cemetery superintendent, a career that spanned over a half century. Ford left his cemetery post once, to fight in the Spanish-American War. Major Ford went to Cuba with the 23rd Kansas Volunteers, commanded by Teddy Roosevelt. As a result he was a delegate to the Republican National Convention of 1899, where Roosevelt was nominated as vice president. In 1905, Ford lobbied for civil rights as a charter member of the Niagara Movement. He died on June 20, 1939, and is buried in Camp Butler National Cemetery.

Otis Beverly Duncan was born on November 18, 1873, in Springfield, IL. His grandfather, William Fleurville, was President Abraham Lincoln's barber and honorary pallbearer at his funeral. The false arrest of his grandson, Duncan’s cousin, helped spark the Springfield Race Riot of 1908, which in turn led to the establishment of the National Association for the Advancement of Colored People. Duncan worked for the Illinois Superintendent of Public Instruction, and he joined the National Guard in 1902. He served with the 8th Illinois during the 1916 Mexican Border conflict and the 370th Infantry (8th IL) during World War I. At the war’s end, Lt. Col. Duncan was the American Expeditionary Forces' highest-ranking African-American officer and he received the French Croix de Guerre. Back in Springfield, he became commanding officer of the 8th Illinois National Guard and the American Legion Post is named for him. Duncan died May 17, 1937, and is buried in Camp Butler National Cemetery (Section 3, Site 835).

More than half of VA's national cemeteries originated with the Civil War and many are closed to some burials. Other sites were established to serve World War veterans and they continue to expand. Historic themes related with NCA's cemeteries and soldiers' lots vary, but visitors should understand "Why is it here?" NCA began by installing interpretive signs, or waysides, at more than 100 properties to observe the Civil War Sesquicentennial (2011-2015). Please follow the links below to see the interpretive signs for Camp Butler National Cemetery.